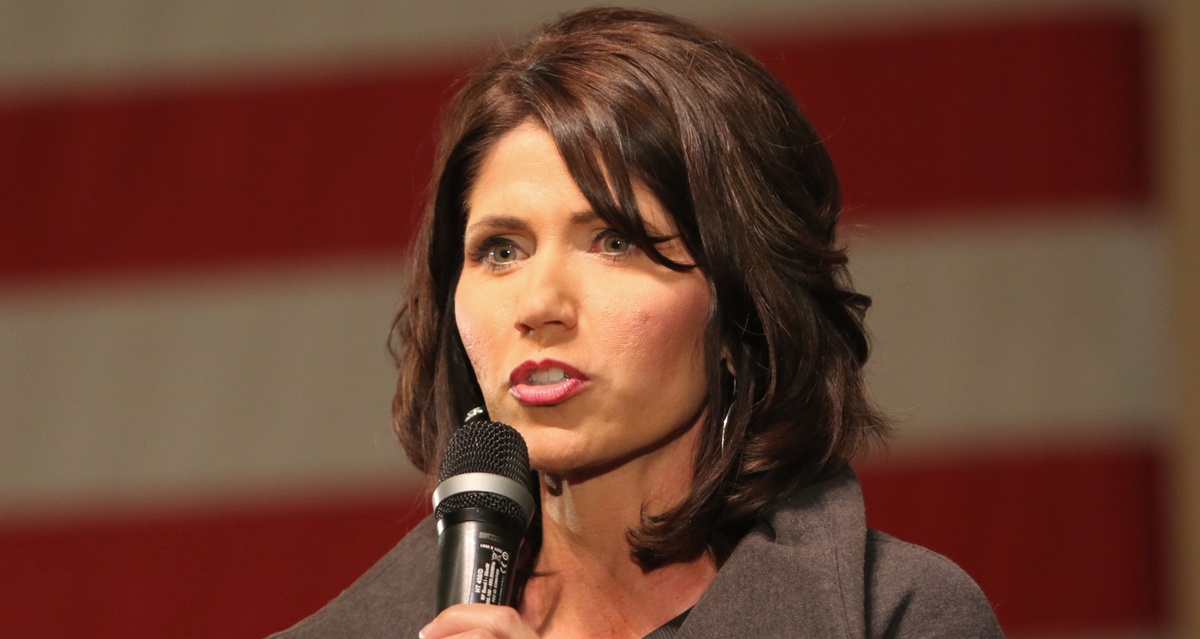 South Dakota’s Republican Governor Kristi Noem is taking criticism for caving to leftist lobbyists by refusing to sign a bill that would ban transgender “girls” from competing in girls sports.

Noem refused to sign a bill that would ban men posing as women from competing against girls in school sports in the state. It appears she refused to sign the bill because corporations oppose transgender bans and Noem was afraid that the companies may refuse to do business in her state.

She also balked at college sports being impacted by the new law because national college leagues such as the NCAA have rules demanding that state colleges allow transgenders to play against biological women.

“House Bill 1217 takes is unrealistic in the context of collegiate athletics. In South Dakota, we are proud of our universities’ athletic programs, and in particular the great strides we have taken to gain national exposure and increase opportunities for our next generation over the past two decades,” Noem said hinting that the state’s reputation would suffer.

“South Dakota has shown that our student athletes can compete with anyone in the country, but competing on the national stage means compliance with the national governing bodies that oversee collegiate athletics,” Noem said.

But the Alliance Defending Freedom took a swipe at the gov. for caving to the left.

“Today, Gov. Noem proposed changes to House Bill 1217 that would eliminate protections for female college athletes outright and gut the ability for all women and girls to have recourse against unfair policies in women’s sports,” wrote Alliance Defending Freedom General Counsel Kristen Waggoner after the gov. refused to sign the bill passed by both the state Senate and House.

“Her misguided attempt to play politics and placate national corporate interests like Amazon is not what we would have expected from this governor. It’s surprising that Gov. Noem, who once stood up to special interests and corporate woke-ism, has now bowed to them,” Waggoner added.

“Contrary to what she has been told, this bill doesn’t conflict with any national sports policy and is fully consistent with the intent of Title IX. Offering some protection for high-school-girl athletes only delays the injustice they will face once they get to college. We call on the governor to withdraw her recommended changes and sign the bill passed by the legislature,” Waggoner said.

Fox News Tucker Carlson also slammed the gov. for caving to the left.

Tucker: “So you’re saying the NCAA threatened you & you don’t think you can win that fight…so you’re caving to the NCAA.”pic.twitter.com/h3lm8L6bjw

For her part, Noem bristled at those claiming that she has caved to the left and that she is betraying conservatives.

“When have you ever known me to cave?” Noem asked radio host Glenn Beck in a recent interview.

I didn’t go through this whole last year, being the only one to keep my state open in the entire nation, to fight for what was right, and have everybody piling on, to cave on something like this. So, I’m trying to be smart and solve a problem. And I think a lot of times, we get bullied. We get bullied by the Left, but the Right can bully, too. And they’re not looking at the facts. So in this situation, the coalition that I’m forming is to go after the NCAA. They have been bullying states for a long time with their policies by forcing us to allow men to participate in women’s sports.

I’m a small state. South Dakota is small. We have to fight hard to even get any tournaments or games in the state of South Dakota. And I recognize the NCAA can come in and crush me, and can make an example out of me, and point to South Dakota and say, ‘See, no other state better challenge us whatsoever.’ So that’s why I’m trying to be smart about this and build a coalition of athletes, of states, of governors, of attorneys generals, and show the NCAA that we’re going to fight to make sure that only girls can play in girls’ sports.

Still, it appears that Noem’s star is no longer rising among conservatives.