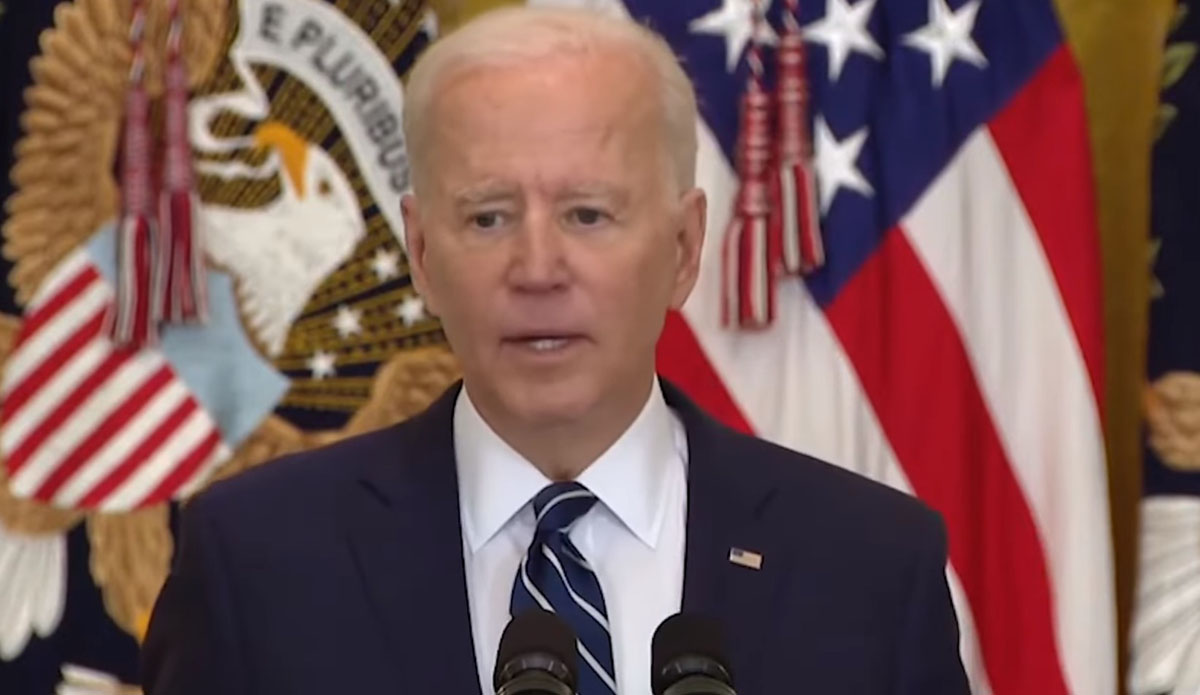 Joe “commander in cheat” Biden finally held a press conference on Thursday, but not only did he actually answered no questions, the things he did say were all lies. Here are his four biggest lies.

Biden alluded to Trump in this comment. And he’s a liar.

We are particularly troubled by reports of the Chinese government’s deepening crackdown on Uighurs and members of other Muslim minority groups in China, including: undue restrictions on freedom of religion; destruction of mosques; unprecedented levels of surveillance; efforts to pressure other governments into forcibly returning Uighurs to China or to coerce family members of Uighurs still in Xinjiang to encourage Uighurs living abroad to return; and the detention of hundreds of thousands, and possibly millions, of Uighurs and members of other Muslim minority groups in facilities ranging from makeshift holding centers to prisons, ostensibly for “political re-education,” in the Xinjiang Uighur Autonomous Region. There are reports of deaths in these facilities. We call on the Chinese government to release immediately all those arbitrarily detained.

That is only one of many times Trump criticized China’s behavior. But this example is plenty to show that Biden lied.

2). Biden: Trump Only Cut Taxes for the Rich

Trump also made the false claim that Trump’s tax cut only helped the rich, saying, “To hear them [Republicans] complain when they passed a close to $2 trillion Trump tax cut, 83 percent going to the top 1 percent.”

This is a lie.

The beneficiaries of the 2017 tax reforms were not confined to the top earners. In fact, the overwhelming majority of American taxpayers received a tax cut through the Trump Tax Cuts and Jobs Act.

This one is a HUGE lie.

Biden said, “I would like elected Republican support, but what I know I have now is I have electoral support from Republican voters. Republican voters agree with what I’m doing. … Over 50 percent of them must be over that edge, as well, cause they support what I did.”

According to Gallup, only ten percent of Republican voters think Biden is doing a good job.

The Washington Post added that Biden is no where near the truth on this one.

“Polls show majorities of Republicans across the country opposed the stimulus bill, although polls show most Republicans supported some key parts of the legislation,” Post pollsters Scott Clement and Emily Guskin wrote. “Across five national polls since late February, between 54 percent and 73 percent of Republicans opposed the $1.9 trillion stimulus package.”

4). Biden: Migrants Are Not Getting Across the Border

Biden also claimed that “the vast majority of families who are coming” to the U.S. are being removed and that “they’re not getting across the border.”

While more than 70,000 border crossers have been removed from the U.S. using the Center for Disease Control’s Title 42 authority, implemented by former President Donald Trump, Biden’s administration has released more than 23,400 border crossers into the U.S. interior since taking office.

Since Biden revamped the Catch and Release program, though, more than 23,400 border crossers have been released into the U.S. interior after being apprehended at the southern border. Thousands more have entered the U.S., illegally, undetected by federal immigration officials.

He also claimed that the number of children trying to come across the border is not any higher than it is “every single year.” This is also false. Biden cited numbers from early in the year but ignored the new influx that is pushing the numbers higher than last year’s numbers.