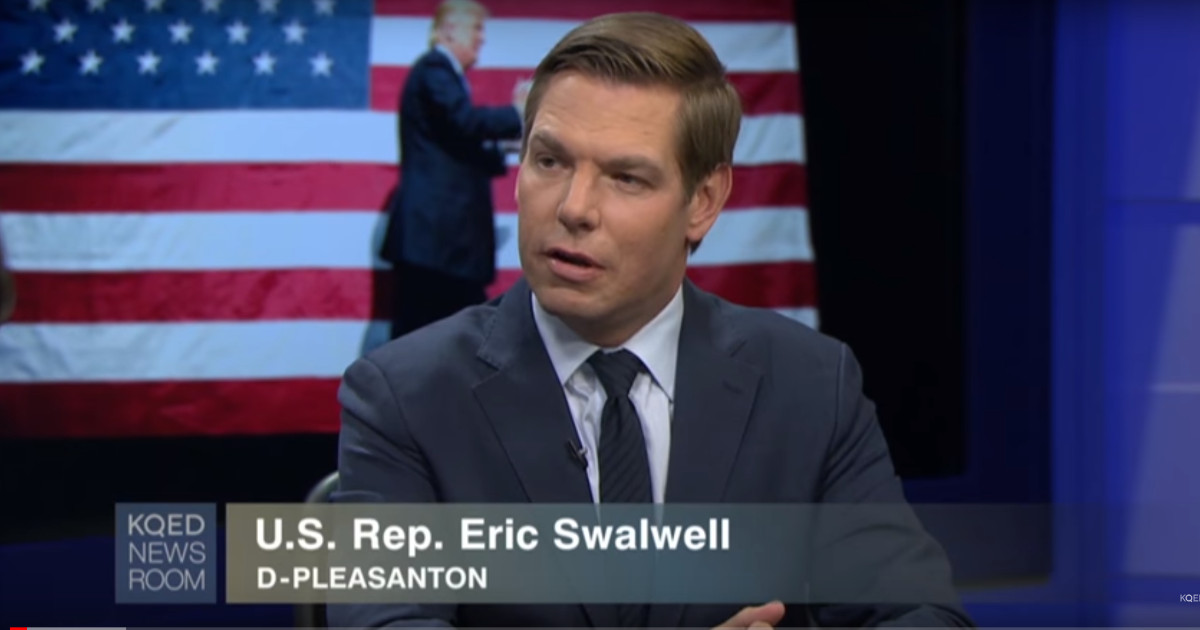 While appearing on MSNBC, the official network of Socialist propaganda, Rep. Eric “Fart-Fart” Swalwell, D-CA., did his best to foment hate and violence against Trump supporters when he told conservative hater Nicolle Wallace that GOP senators are inspiring so-called “white nationalists” to “take up arms against their government.”

“The lie threatens our safety every day, not just my safety, and my ability to work, not just the staff and police officers, but the safety of everyday Americans is threatened when white nationalists are stoked by lawmakers who day after day continue to perpetuate this lie,” he said, referring to those questioning the validity of the 2020 election.

“What is so telling to me is that at that CPAC conference, where many of those senators attended, the number one issue for the goers was election integrity. If you have senators co-signing off on this big lie and still stoking it, you are going to encourage the most extreme among us to take up arms against their government because these senators are saying Joe Biden is not the lawful president. That’s dangerous for all of us,” he added.

“If we give them a permissive environment to grow, it’s only going to be worse. As I said, it’s personal safety, and it’s your vote being certified in the 2022 or the presidential election going forward. The For the People Act fixes that, and then on the practical, functional side of law enforcement, it’s giving law enforcement the resources to attack white nationalism to understand how people are radicalized, recruited, and projected on to targets,”

“We have 14 names. There will be candidates I’ll be working to support to make sure those senators don’t return to the Capitol,” adding, “It takes all of us to keep the pressure on. We can’t let this go away. I know the names of every single Republican that voted to perpetuate that big lie. My job is to make sure that our constituents do too. That is the only way to do it. If we cannot change their minds, then they need to know we’ll work every day to change their seats.”

Sorry Swalwell, but the only thing the “For the People Act” fixes is future elections. And it fixes the elections so the Democratic Party wins every one.

Here’s a video of the segment (Note, thankfully he doesn’t fart on MSNBC this time):

Keep in mind this is the same man who spoke of the government using nuclear weapons on those who believe in the Second Amendment right to keep and bear arms, who after Trump was cleared by Mueller, claimed that the Mueller report revealed “evidence of collusion and coordination and the same man caught with a Chinese spy. He’s also one of those who used manipulated evidence during the second Trump impeachment trial.

Less than a week ago, Swalwell filed a lawsuit against former President Trump, claiming the former POTUS incited the January 6th capitol riot, and the riot caused him emotional distress,Truth be told Swalwell’s brain was never wired correctly.

It seems to us that if Swalwell wants to find the real threat to America, all he needs to do is look in the mirror.

Much of this post was first seen at Conservative Firing Line.