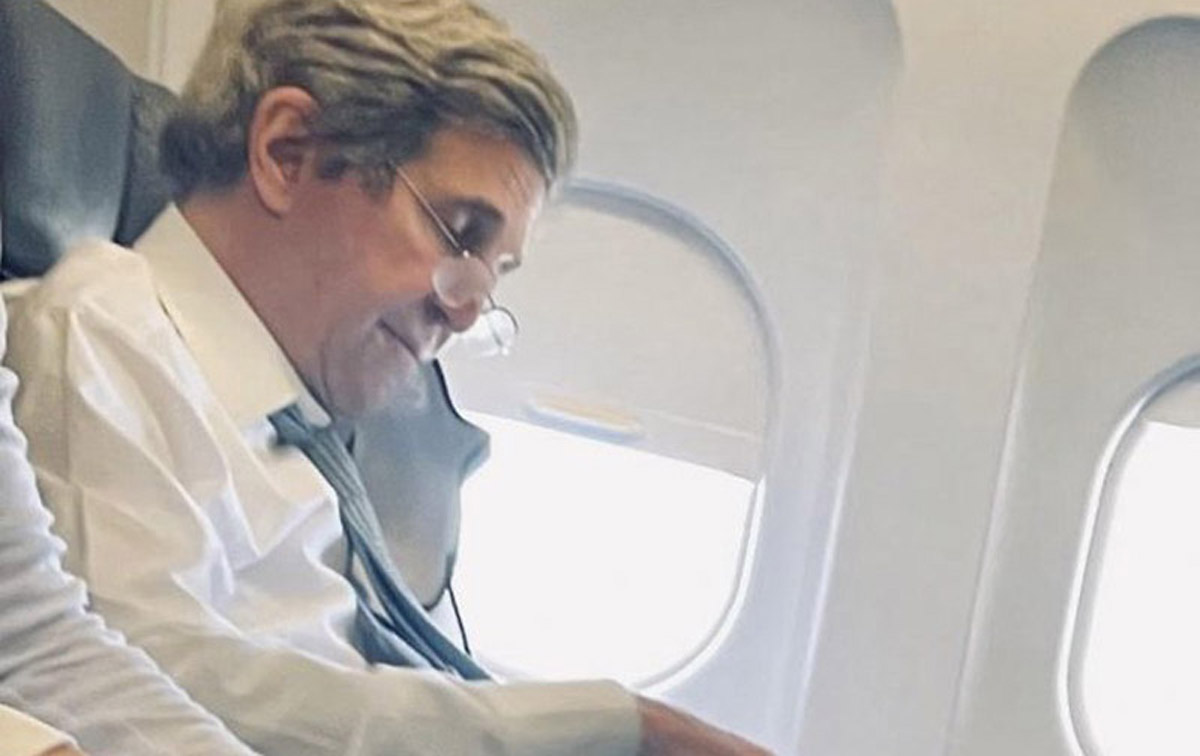 The former Massachusetts Senator and Obama Secretary of State was sitting in the first-class section of an American Airlines flight from Boston to Washington D.C. with his mask dangling from one ear as he sat reading a book.

@TheTNStar Exclusive: Biden’s @ClimateEnvoy John Kerry, took off his mask as he settled into a book in his first-class seat just before takeoff today on an @AmericanAir flight Boston to DC. He was not eating, nor drinking. He was simply flaunting Biden’s mandatory mask policy. pic.twitter.com/t1wDq9OtxD

Critics of Kerry immediately pointed out that it is a federal rule that all passengers MUST wear a mask at all times unless they are drinking or eating. The photos clearly shows that Kerry is not eating or drinking. He has his reading glasses on and is reading a book that is perched on his lap.

Not only is Kerry violating federal FAA rules, he is directly violating Joe Biden’s demands that Americans should wear masks. Kerry also owes an apology to every passenger on the plane, not to mention to the American people for refusing to follow the rules that his own boss demanded of the common man.

Many noticed this hypocrite:

NOTE: His mask is off & he isn’t eating or drinking. Will he be fined for breaking the law & banned from flying @AmericanAir like regular citizens would be?#LiberalPrivilege pic.twitter.com/3j7j57jXVI

Omg. I’m supposed to get on an American flight later today and I’m literally shaking right now thinking about how dangerous it is to fly American.

Just remember that @AmericanAir would harass YOU if YOU dared to remove your mask aboard one of its aircraft.
Kerry, like every other Democrat, gets a pass while YOU suffer! https://t.co/i85wvV8xI7

Kerry later tried to offer a very weak excuse for the photo.

“Feels like there’s some St. Patrick’s Day “malarkey” afoot on Twitter. Let’s be clear: If I dropped my mask to one ear on a flight, it was momentary. I wear my mask because it saves lives and stops the spread. It’s what the science tells us to do,” he tweeted.

Feels like there’s some St. Patrick’s day “malarkey” afoot on Twitter. Let’s be clear: If I dropped my mask to one ear on a flight, it was momentary. I wear my mask because it saves lives and stops the spread. It’s what the science tells us to do.

Such a lame excuse.