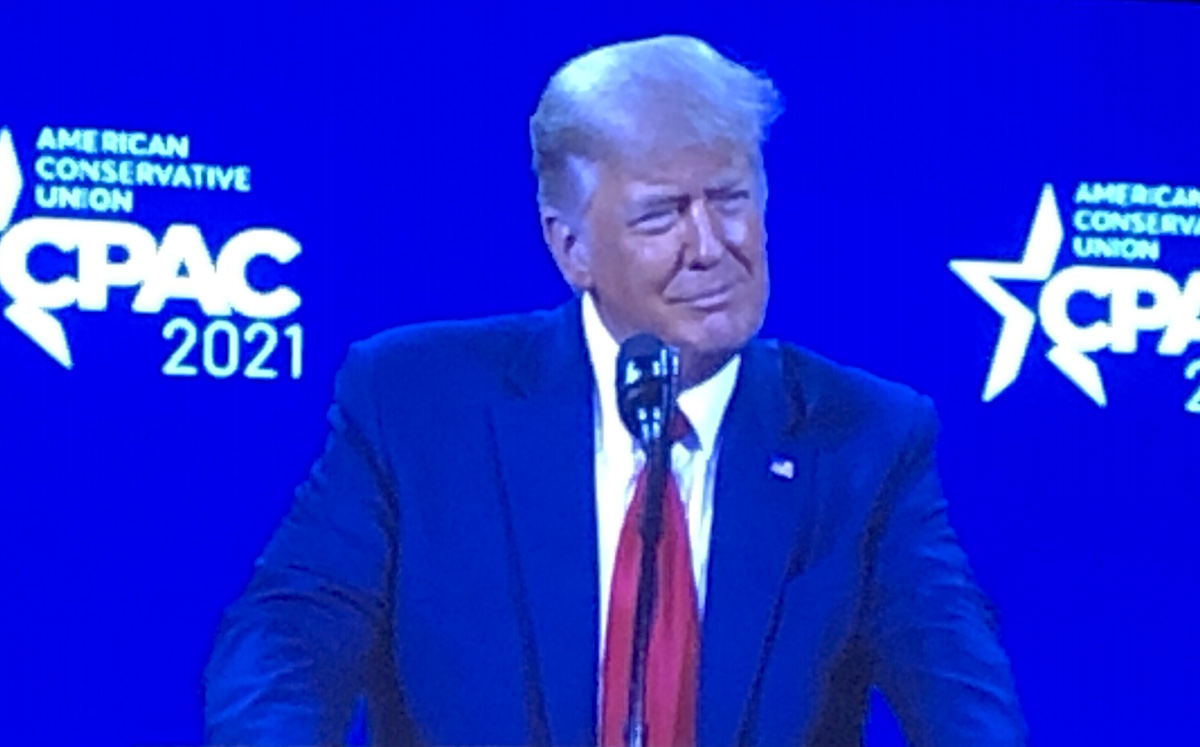 President Trump took the stage at CPAC on Sunday to the raucous cheers of the conservative audience in the Hyatt Regency in Orlando, Florida.

“As we gather we are in a historic struggle for America’s future,” Trump said right after taking the stage.

Only minutes into his speech, Trump thanked talk show giant Rush Limbaugh who just passed away after a year-long battle with lung cancer.

The president also shot down the idea of starting a new party. He’s in it for the GOP, he said. “Let’s divide our vote so we could never win,” Trump said sarcastically before calling the news that he may start his own party just a bunch of “fake news.”

The former president went on to tout the accomplishments of his administration, starting with his actions on immigration. And then he contrasted his policies with Biden’s open door policy that allows illegals to come in without masks, or health checks for the “China virus.”

Trump them segued into a few words on the 2024 election and said that Biden will lose after his radical presidency. Then Trump riled the crowd saying, “I might even decide to beat them for a third time,” he joked as the crowd went wild.

The former president then veered back to immigration by reiterating one of his old lines. “They aren’t getting us their best and their brightest,” he said of countries sending their people here by the millions.

He noted that when he became president, he stopped paying certain amounts of foreign aide when he found out that countries like El Salvador were refusing to take the criminals our immigration officials were trying to deport back to their homelands. But now, Biden is once again allowing these nations to refuse to take their criminals back AND are once again paying these aide packages, something Trump finds abhorrent.

Trump took a shot at our schools for not being open for in-person education. “They must get back, and get back right now!” he said of the refusal of our schools to open during this coronavirus, “anti-science school closures.”

“On behalf of the moms and dads of America I call on Joe Biden to open the schools now,” Trump exclaimed.

The former president then touted his successful 9-month campaign “Warp Speed” to create a coronavirus vaccine. “Never forget that WE did it,” Trump said, “Don’t let them take the credit.”

Trump also slammed the media for not properly reporting that the Biden administration is simply continuing the vaccination program Trump started. He also slammed Joe Biden for saying that when he came to office, there was no vaccine. “I don’t think he said that in a malicious way,” Trump said. “I just think he just doesn’t know what the hell is going on.”

The former president moved on to the “endless wars” that he put an end to and warned that the new administration is looking to restart them all. And he pointed out how few Americans died in his administration, not to mention the massive success on Mideast peace that was finally budding under his hand. All successes that Biden is already throwing away.

The president soon drew great applause for making America energy independent, but lamented that Biden is destroying that accomplishment driving up energy costs. He noted that gasoline has already surged past $3.00 a gallon.

Next, when he went into how the GOP is changing into a “party of love,” the whole hall erupted in chants of “USA, USA.” He went on to say that American politicians must put Americans first.

Trump hit the bullet points on what “Trumpism” stands for, praised the military and first responders, slammed communism and socialism, pro-life policies, election integrity, and other themes. And he brought the crowd to its feet when he noted that we respect our founders, our history, and our flag. That applause rolled on when he noted that “we reject cancel culture” and that we support the U.S. Constitution.

As to elections, Trump called for the end of mail-in voting except for those with a legitimate reasons not to come out on Election Day. He also called for universal voter I.D. laws to be passed into law. He added that there should be checks that people voting are legal citizens. He insisted that the Democrats used COVID as an excuse to summarily and illegally change election laws.

Another example of sustained applause came when Trump called for a take down of Big Tech. The cheers came when he said that the protections of Section 230 of the Communications Decency Act that gives Big Tech the cover to censor only conservatives should be readdressed. And if the Republicans in congress won’t act, then he said that he thinks every state needs to pass their own version of a repeal or other law that would affect the wanton acts of cancel culture indulged freely by Big Tech.

Noting that 120 of the 122 candidates he endorsed won their elections in 2021, Trump ended his speech noting that he intends to work to elect Trump-style Republicans all across the country. He is clearly starting a Super PAC to affect this new wave of Trump candidates. It will be called the SaveAmerica PAC and the site for now will be DonaldJTrump.com.

Trump left the stage after an hour and a half of speaking.