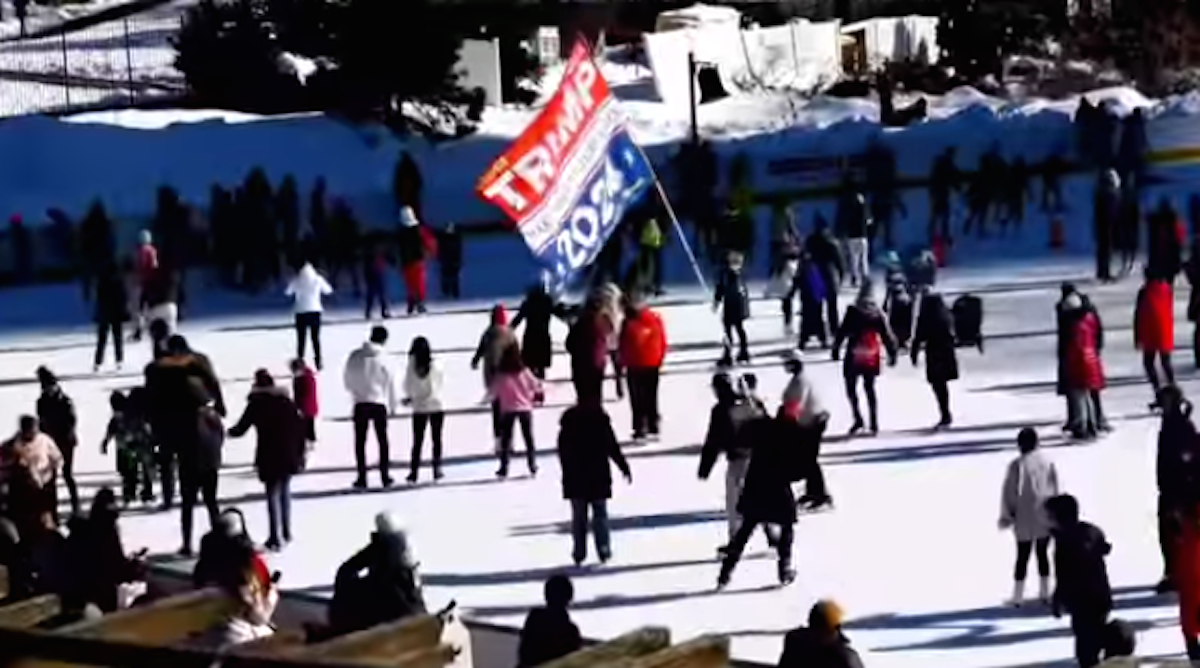 A brave Trump supporter brought his Trump 2024 flag to an ice rink in New York’s Central Park that left-wing Mayor Bill de Blasio wanted to shut down because it was operated by the Trump organization.

Dion Cini, who calls himself a “guerrilla marketer,” brought his flag to Central Park’s Wollman Ice Rink on what was supposed to be its last day of business after being targeted by the Democrat Big Apple mayor.

A video posted by FreedomNews TV shows Cini skating around the rink with a long pole festooned with his large Trump flag before security guards begin demanding that he leave the ice.

Eventually, security officers grab Cini and wrestle him to the ground to eject him from the rink physically. But as security deals with Cini, another man — identified as Travis Scott – is seen stealing Cini’s flag.

“The crowd of ice skaters booed the man, who was wearing a ‘Make America Great Again’ hat, as he skated on the ice holding the flag, the video shows,” PIX 11 reported. “He was then tackled by another skater as people nearby clapped and another person took the man’s flag away.”

The party of unity !! People cheering as my friend @dioncini was attacked in Wollman Rink in Central Park for waving a Trump 2024 flag !! pic.twitter.com/8Wj5QOyFQs

Cini told Daily Dot that he regularly displays Trump flags and other items in areas where the president’s name is not welcome.

“I brought the Trump 2024 flag to Trump Wollman rink because it was the last day of The Trump organization managing the rink, which they’ve done for the last 30 some years, and wanted to celebrate another Trump accomplishment while also starting a campaign push for 2024,” Cini exclaimed. “As I was being attacked, I heard people cheering as I was put into a chokehold, which shocked me because I thought they want unity and not watch their fellow Americans being [attacked] over a flag.”

“New York City kids deserve all the time on the ice they can get this year,” mayoral spokesman Bill Neidhardt said according to PIX 11. “But make no mistake, we will not be doing business with the Trump Organization going forward. Inciting an insurrection will never be forgotten or forgiven.”