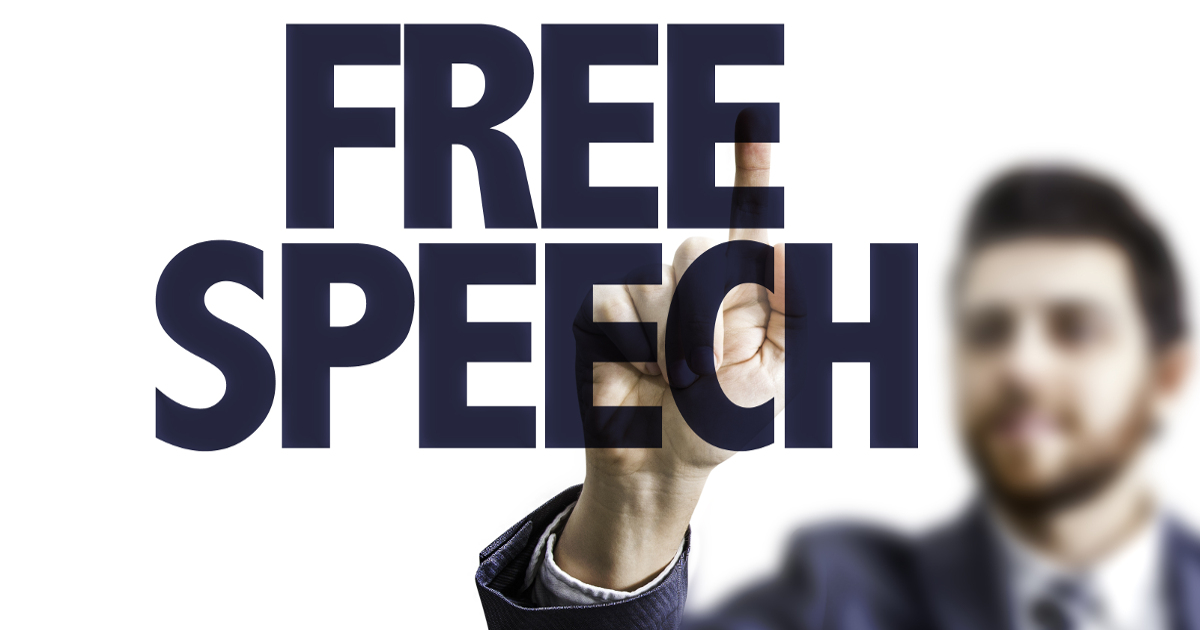 George Washington made the connection of free speech to all other freedoms very clear:

“For if Men are to be precluded from offering their Sentiments on a matter, which may involve the most serious and alarming consequences, that can invite the consideration of Mankind, reason is of no use to us; the freedom of Speech may be taken away, and, dumb and silent we may be led, like sheep, to the Slaughter.”

Democrat media, big tech, and political agents have launched a full-scale frontal assault on free speech during the last two months. Until then, it was slow guerilla warfare, but it’s now a full-scale war. People being tossed off of social media networks, Parler being closed down by leftists, calls for conservatives to be re-programmed and so much more, the leftist attacks against conservative 1st Amendment rights grow more frequent every day.

How then to restore Free Speech? In the schools, in politics, and in the media.

The Declaration of Independence lays out a roadmap. And using peaceful, lawful means, we follow this roadmap to restore Free Speech. There is no other choice:

“We hold these truths to be self-evident, that all men are created equal, that they are endowed by their Creator with certain unalienable Rights, that among these are Life, Liberty and the pursuit of Happiness.–That to secure these rights, Governments are instituted among Men, deriving their just powers from the consent of the governed,

–That whenever any Form of Government becomes destructive of these ends, it is the Right of the People to alter or to abolish it, and to institute new Government, laying its foundation on such principles and organizing its powers in such form, as to them shall seem most likely to affect their Safety and Happiness”\

Peaceful, well planned and organized local and national projects related to free speech are going to be effective. The battle will be long and hard. Thomas Paine explained that the fight for Liberty is never easy, in the War of Independence pamphlet, The American Crisis.

“Tyranny, like hell, is not easily conquered; yet we have this consolation with us, that the harder the conflict, the more glorious the triumph.”

For us, the battle is on all levels; state, local, and national. Organize with groups of friends you know and can trust. Work with local and state officials to strengthen and support freedom of speech. Republican State legislatures are a good place to start. Your state and local representatives are looking for your support and your ideas. If you stand shoulder-to-shoulder with them, they will act.

For those in totalitarian blue states, the local government may be the key.

The choice is between free speech and being led like sheep to the slaughter. The fight for free speech has never been more urgent in our history. We can be 80 million heroes.

“In those wretched countries where a man cannot call his tongue his own, he can scarce call anything his own. Whoever would overthrow the liberty of a nation must begin by subduing the freeness of speech; a thing terrible to publick traytors.”–Benjamin Franklin

Most of this post was first seen at Conservative Firing Line and written by Dr. Joel S. Holmes. Some parts were added by Jeff Dunetz