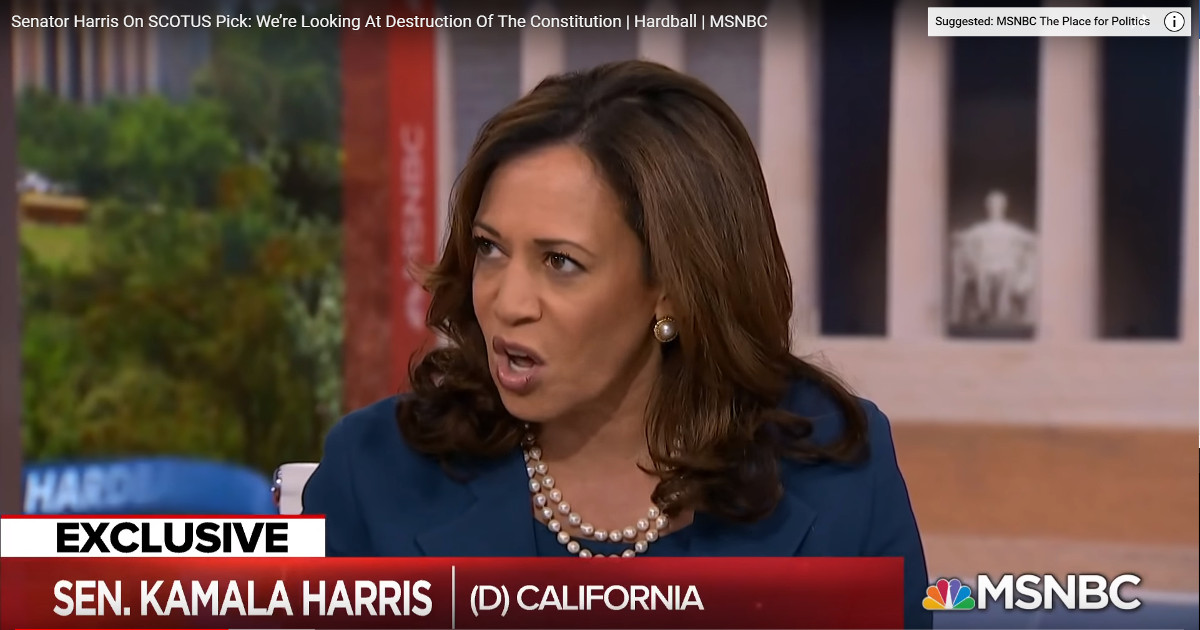 Over the weekend, Sen. Kamala Harris posted a cringy, pandering video making the dubious claim that she celebrated Kwanzaa as a kid growing up in California.

It is not likely that this is true. Date-wise, it is outside possible, granted. Kwanzaa was invented two years after Harris was born. But she claims she celebrated it during her entire childhood.

Harris made this absurd claim in a new video posted last weekend:

In the video, Harris says:

You know, my sister and I, we grew up celebrating Kwanzaa. Every year our family would – and our extended family, we would gather around, across multiple generations, and we’d tell stories. The kids would sit on the carpet and the elders would sit on chairs, and we would light the candles, and of course afterwards have a beautiful meal. And, of course, there was always the discussion of the seven principles. And my favorite, I have to tell you, was always the one about self-determination, kujichagulia.

And, you know, essentially it’s about be and do. Be the person you want to be and do the things you want to do and do the things that need to be done. It’s about not letting anyone write our future for us, but instead going out and writing it for ourselves. And that principle motivates me today, as we seek to confront the challenges facing our country and to build a brighter future for all Americans. So, to everyone who is celebrating, Happy Kwanzaa from our family to yours.

The fake holiday was created by a conman, and woman abuser in 1966. It was invented by activist Maulana Karenga, who has a violent, racist criminal record, and is even a rapist who was convicted of torturing his victims.

Harris was born in 1964 in Oakland, California. And as a child she lived for several years in Berkeley, California. Karenga was a black nationalist activist in the Los Angeles area in 1966 when he invented the holiday. It was the same year he was convicted of the assault and the sexual torture of several women. He served several years in prison for the crime and ultimately became an associate professor and chairperson of black studies department for California State University at Long Beach.

So, while the dates do make it possible for Harris to have celebrated Kwanzaa as a kid, the fact is, the fake holiday didn’t even start reaching people until the 1970s, after Karenga got out of prison. Indeed, the holiday didn’t really seep into the mainstream of the black community until the early 1980s. And even by the estimation of PBS, the popularity of the holiday began waning by the 1990s.

The fact is, Harris was already long past being a “kid” by the time the fake holiday had become popular.

Further, Harris’ father (who is a black man from the Caribbean) and mother (who is from India) divorced in 1971 and five years later Harris moved with her mother to Canada. So, we are expected to believe that her family immediately began celebrating Kwanzaa in 1966 when it was invented and then kept celebrating it even though a mere nine years later, she was living in Canada with a mother who is not black and has no real connection to black culture? And all the while, the holiday had not yet even begun to seep into black culture for half a dozen more years after that.

Basically, you can mark Harris’ claim to have celebrated Kwanzaa as a child as a flat-out lie.