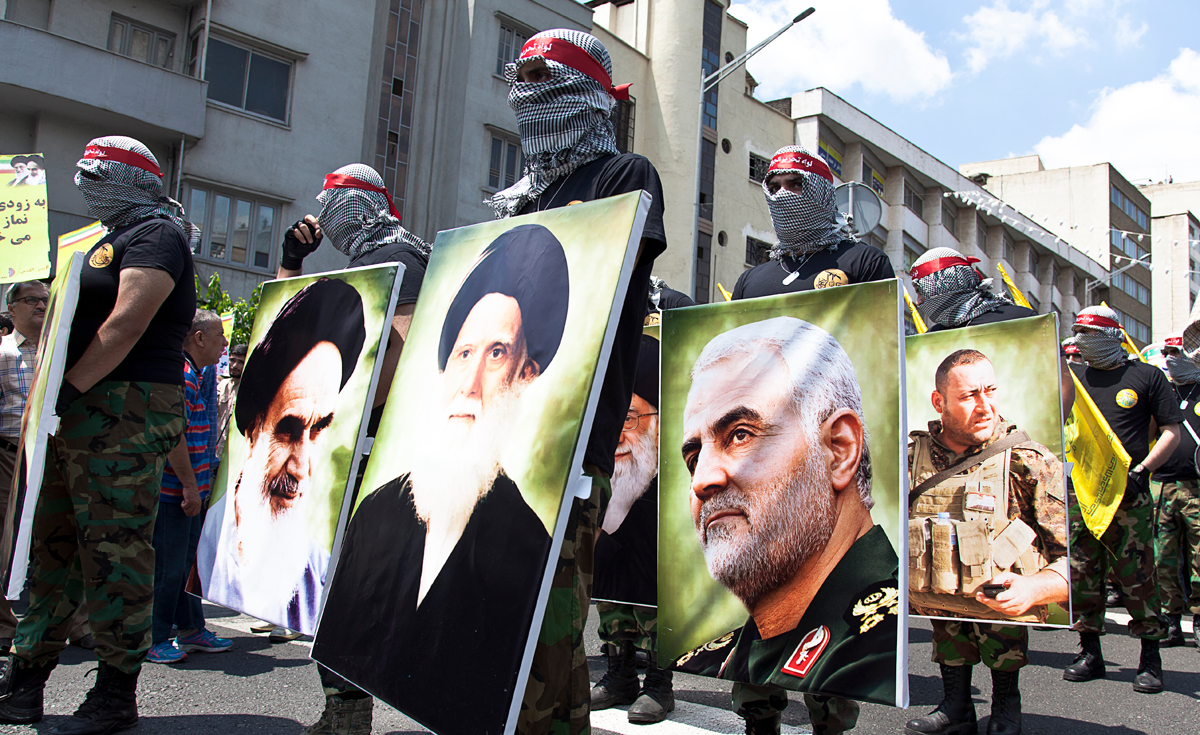 Beginning with the annual Yalda celebration, Iranians have been protesting their government’s refusal to purchase the vaccines already available but manufactured outside Iran. There are no Iranian vaccines yet. #Buy_Vaccine!

Like many other holidays worldwide, this year’s Yalda celebration in Iran was very different as families and friends could not get together for the usual fare because of COVID-19. Yalda is an Iranian holiday celebrated since ancient times on the winter solstice, the longest night of the year, and the return of longer days.

Usually, on that date, friends and family gather together to eat, drink and read poetry till late that night. But the frustration of skipping the annual celebration, combined with the almost 55K deaths from the virus, has motivated some Iranians to publicly express their frustration with their government’s response to the pandemic.

The biggest frustration stems from what seems to be the regime’s refusal to purchase COVID-19 vaccines. And they’ve taken their frustration online in what the Iranian newspaper Hamshahri called طوفان توییتری (a Twitter storm).

The Islamic Republic’s clampdown on freedoms in an increasingly stifling environment has in recent years confined Iranians to campaigns on social media as their last resort to speak out with a minimal risk of prosecution. And the expression of anger against the coronavirus pandemic policies has been no exception.

“Just import the vaccine,” is what furious Iranians post across social media platforms, accusing their government of dragging its feet on purchasing the internationally approved coronavirus vaccines.

(…) Loved ones, and particularly grandparents, who once recited classical, inspiring poems for the greater family [on Yalda] were but empty seats, leaving behind a grim picture of just how the virus has robbed Iranians of the emotional bonds that have historically defined their very cultural identity.

“For the elderly who face imminent death,” “for the sake of the fatigued medical staff” and “for the schoolchildren who are grappling with depression,” social media users urged the government to import vaccines. The top trending Persian hashtag that translates into “buy the vaccine” did not just carry a tone of frustration and helplessness. Many of those messages were replete with scathing criticism rooted in accumulated discontent with a wide range of issues, from the government’s corruption and money laundering to its regional activities and a perceived politicized approach toward the pandemic.

#واکسن_بخرید
We need to be vaccinated
Please hear our voice

And is still going on: 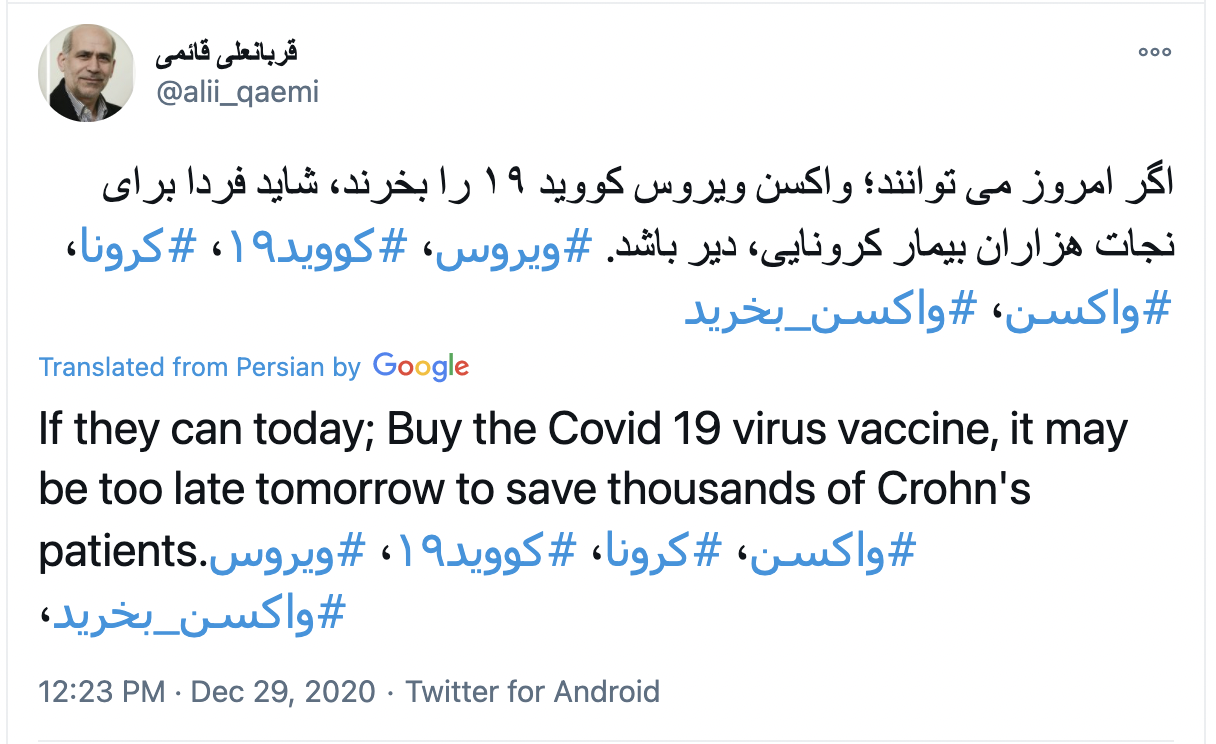 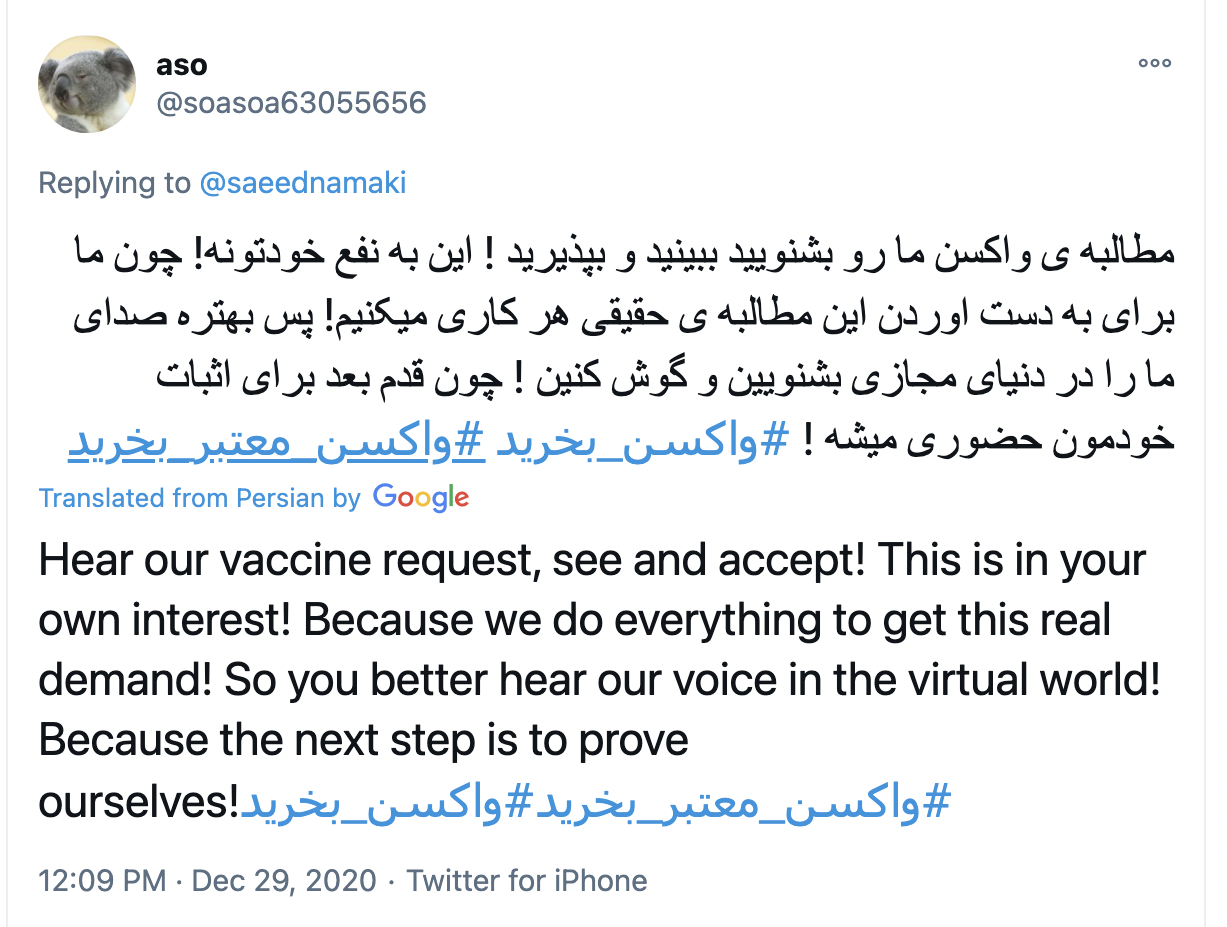 A Twitter search of the hashtag in Persian #واكسن_بخرید will reveal hundreds of tweets just like the above.

The president of the Iranian Medical Council, Abbas Aghazadeh, advised the Rouhani administration to put aside political considerations and focus instead on vaccine purchases. “Millions of lives cannot be compromised for the sake of … ideological rivalries,” he said. But remarks by the Iranian president last week added confusion to the already complicated case; in an indirect reference to Western vaccines, Rouhani said his government cannot afford to allow “unreliable” products to be tested on Iranians.

Is that the real reason? Or is it because three Iranian companies are working on their own vaccines, ones they will charge the people for—and the Mullahs are protecting their profits? Perhaps it’s because the regime is spending its cash on nuclear weapons development and supporting terrorism.

It’s disgusting that this is a regime that cares much more about funding war and hatred more than the safety of its people. Not that Biden and the Democrats care—they want to “make nice” with the regime of hate.