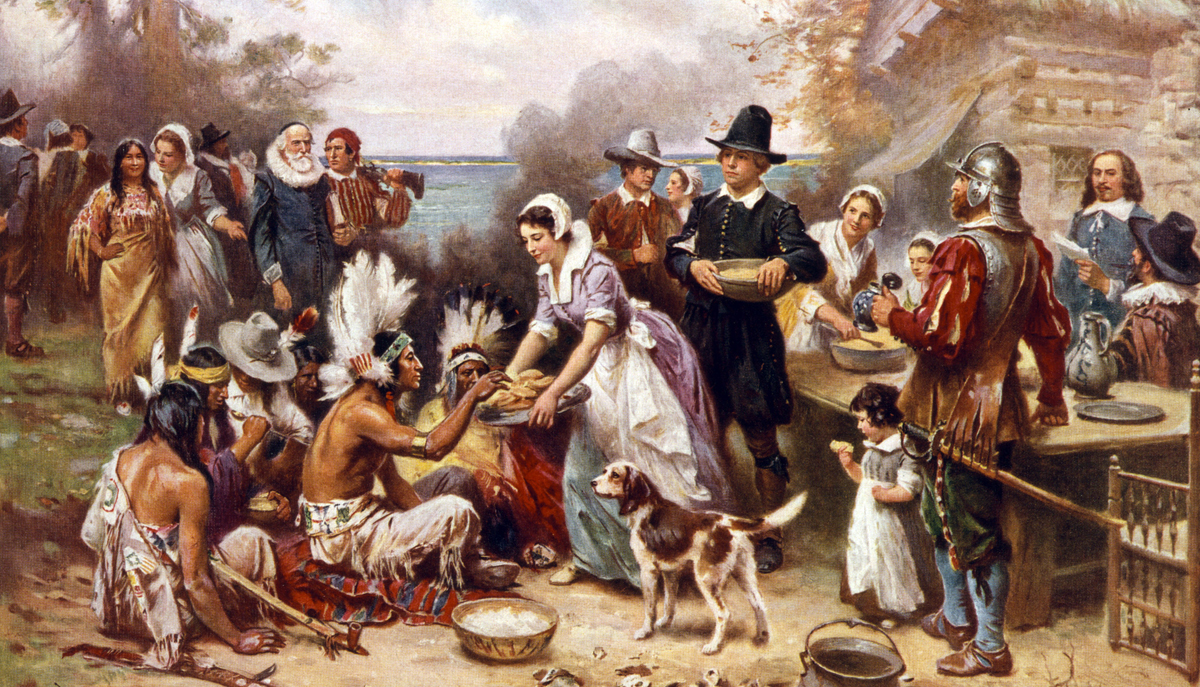 Our kids have been taught fake news about America’s first Thanksgiving. The Indians didn’t save the Pilgrims. Ending communism did.

It is simply untrue that the Pilgrims were able to celebrate their first Thanksgiving feast because the noble Indians saved them by showing them the ways of America. No, in reality, the Pilgrims were saved because they replaced their original communist system with a capitalist ideal.

William Bradford’s fellows came to the Americas to start a colony that would be a light unto all humanity, one based on a strict adherence to the Christian Bible. They wanted the opportunity to live as they desired, unique, and free from interference from the Church of England, the Crown, or British authorities.

But when they arrived near modern-day Massachusetts and founded Plymouth Plantation — which we often call the Plymouth Colony today — they came ill-prepared to live in the wildlands they encountered.

It is absolutely true that the members of the colony became friendly with the local Wampanoag Indians. It is also true that the natives helped the colonists learn a bit more about the bounteous land the Pilgrims came to call their own.

But the colony had a flaw inherent in its original plan, and it wasn’t just a fatal unfamiliarity with how to survive in the new world. It was a flaw that almost doomed the colonists.

The problem was, the original plan for how the outpost would operate was essentially a communist system. The original plan was for all labors to contribute to a central store. Just like a commune, everyone would work for the benefit of everyone else, and all would benefit equally from the colony’s labors.

That plan sounded like a perfectly sensible, Christian ideal, after all. Bradford and his fellows thought everyone would love everyone else equally, and in Christian charity, all would be cared for equally.

Unfortunately, that is not how human nature works. And the colonists soon learned this the hard way.

The common store idea was a miserable failure because some wanted to take without giving as much into it as others had. In other words, Bradford found that some people just didn’t want to work that hard if they knew they were going to benefit from the common stores just like everyone else. Worse, some became embittered that they had worked so hard while others did not.

So, Bradford dumped the original communist ideal and replaced it with a more capitalist one by assigning a plot of land to each family to work as their own, the labors of which would benefit themselves first and foremost.

Bradford chronicled the change this way:

The experience that we had in this common course and condition tried sundry years…that by taking away property, and bringing community into a commonwealth, would make them happy and flourishing — as if they were wiser than God.

For this community (so far as it was) was found to breed much confusion and discontent and retard much employment that would have been to their benefit and comfort. For the young men, that were most able and fit for labour and service, did repine that they should spend their time and strength to work for other men’s wives and children without any recompense.

The strong, or man of parts, had no more in division of victuals and clothes than he that was weak and not able to do a quarter the other could; this was thought injustice. The aged and graver men to be ranked and equalized in labours and victuals, clothes, etc., with the meaner and younger sort, thought it some indignity and disrespect unto them.

Worse, some were embittered by the system and felt that working for the common store was “a kind of slavery”:

And for men’s wives to be commanded to do service for other men, as dressing their meat, washing their clothes, etc., they deemed it a kind of slavery, neither could many husbands well brook it.

But once Bradford assigned each family their own land, things began to turn around. “This had very good success,” wrote Bradford, “for it made all hands industrious.”

The change came just in time and turned the colony around. Plymouth Plantations went from a failing effort into a successful one.

This is not to utterly discount the help and guidance that the Indians gave the Pilgrims. They were also an essential part of the success of the Plymouth Plantations.

But the shop-worn story that the Pilgrims were stupid, starving, and dying until the noble Indians swept in and gave them a turkey and a pumpkin pie is a false narrative. The colonists did as much to save themselves by dumping a communist ideal as the Indians did to help them learn how to scratch out a life in the Massachusetts wilderness. As in most cases, real history is far more complicated than a facile trope.

So, let’s put an end to the fake history, shall we?