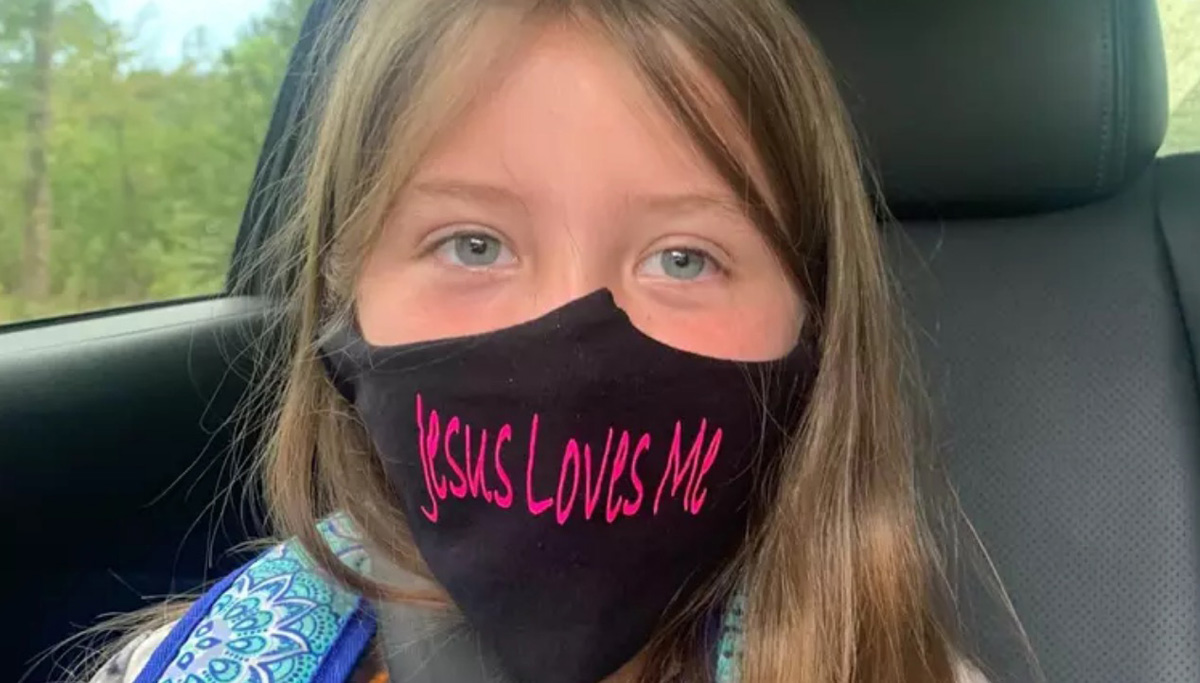 The parents of a nine-year-old grade school girl are suing their school district after administrators forced the girl to remove her “Jesus loves me” mask.

The parents, who are Christians, are suing the school saying that they violated the girl’s First Amendment rights to freedom of religion.

The lawsuit says, “Religious Speech Policy prohibits messages on masks that are ‘political, religious, sexual or inappropriate symbols, gestures or statements that may be offensive, disruptive or deemed distractive to the school environment.”

The parents’ filing adds that the school’s censorship and its “Religious Speech Policy and practice on which that censorship is based, violate the First and Fourteenth Amendments to the United States Constitution.”

Parents Matthew and Jennifer Booth say that their daughter was sent wearing the mask to Simpson Central School in Pinola, Mississippi, but during a computer class, the teacher told the girl she was not allowed to wear it in class. The parents also say that the girl had worn the mask in school before and faced no repercussions.

The Booths added that the school never posted any rules governing what can be on face coverings.

So, the parents sent the girl to school wearing the mask again. Then they got a call from the school principal telling them the mask was not allowed because it “violates” the school’s dress codes that bar “clothing, advertising, alcoholic beverages or drug culture, clothing with obscene language or gestures or clothing of any suggestive nature.”

Public schools have a duty to respect the free expression of students that the First Amendment guarantees to them. While school administrators face challenges in helping students navigate school life during a pandemic, those officials simply can’t suspend the First Amendment or arbitrarily pick and choose the messages that students can or can’t express. Other students within the school district have freely worn masks with the logos of local sports teams or even the words ‘Black Lives Matter.’ This student deserves an equal opportunity to peacefully express her beliefs.