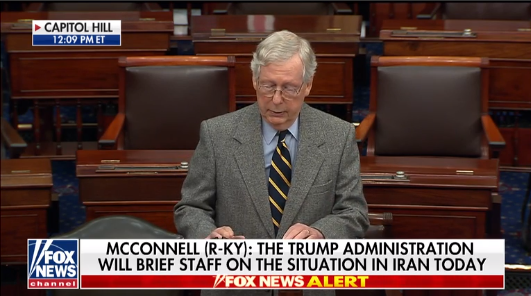 The House Speaker was told, in no uncertain terms, that her turn was over. It is now time for the Senate to do their part of the process and render fair judgement on the articles of impeachment. What articles? Where are they? Oh. They are still being used as a pawn by Madam Speaker.

But he stressed that the chamber cannot hold a trial unless and until the House of Representatives transmits the two articles of impeachment adopted last month, accusing President Trump of abuse of power and obstruction of Congress pertaining to his dealings with Ukraine. Pelosi, D-Calif., has held onto them in a bid to seek favorable terms for a trial, including the involvement of certain Democrat-sought witnesses.

McConnell called Pelosi’s effort to “hand-design” the proceedings in the Senate a “non-starter” and a “fantasy.” (MORE HERE)

The Democrats are saying that they want a “fair process.” If their idea of fairness was the House hearings then you can call it what it really was, a Kangaroo Court. The outcome was decided before the first ‘witness’ was ever called.

D.C. Mayor Bowser: ‘We are going to go back to a new normal’
January 16th, 2021 Liberty Unyielding