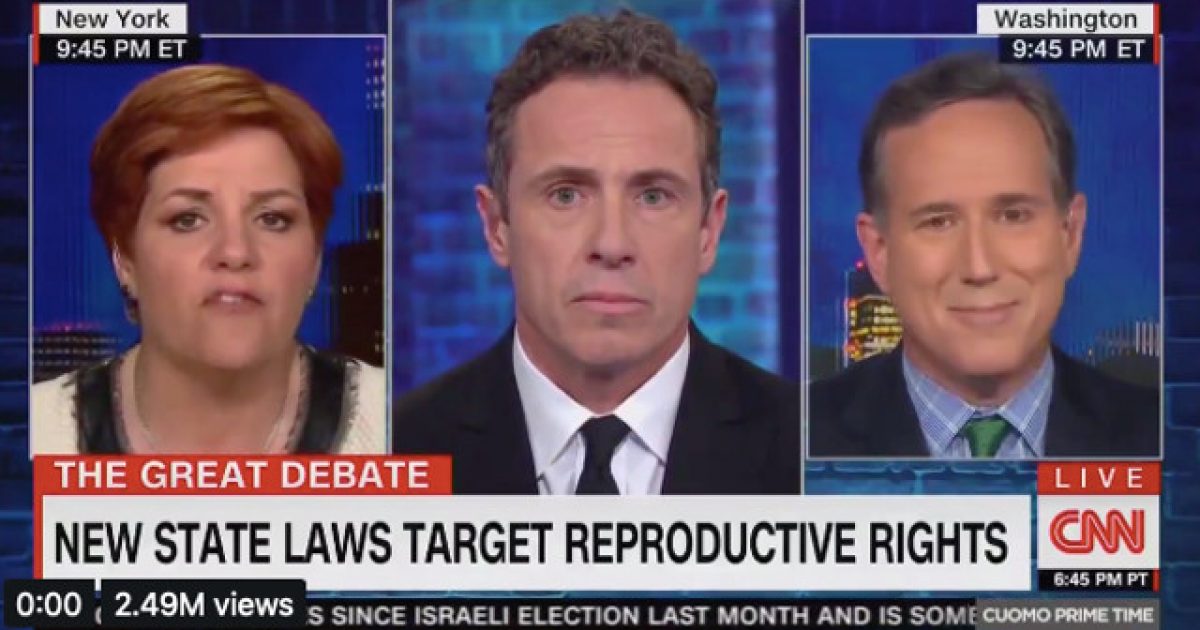 Christine Quinn was recently a guest on CNN and during a conversation on Monday evening about pro-life state-level “heartbeat bills” stated that when a woman gets pregnant, she doesn’t have a human being inside of her.

This is the kind of sick and twisted thinking that springs from the minds of those who see no value in the lives of human beings, particularly when they are still in the womb.

And yes, Ms. Quinn, it is a human being. The science and the Bible are both settled on that truth.

“Christine, what’s the concern with what just passed in Georgia, and what you may wind up seeing more of, a state passing through its legislature, a more restrictive right to reproductive acts such as — reproductive rights such as abortion?” CNN’s Chris Cuomo asked. “This is a six-week bill.”

“These so-called heartbeat bills are exactly what you said, six-week bills. They, for all intent and purposes, are an end run around Roe versus Wade, and a clear attempt to make abortion illegal in new — across the country,” Quinn said. “That’s what they are. And we’ve seen in states where they’ve been passed already, courts strike them out or enjoin them. This is a clear attempt to take decisions about a woman’s body and birth out of the hands of a woman and out of the hands of doctors.”

Quinn became hostile toward CNN contributor Rick Santorum, and Cuomo jumped in and sided with Quinn.

Later in the interview, during an exchange with Santorum, Quinn said, “When a woman gets pregnant, that is not a human being inside of her. It’s part of her body.”

The Party of Science™ pic.twitter.com/Ch1IqSGFdO

.@ChrisCuomo must think he's Captain America or something, being the purveyor of truth, but he repeatedly condemned @RickSantorum as saying "provocative things" and "pevert[ing] the facts" about infanticide. He also rushed to defend his brother Andrew's abortion record in NY pic.twitter.com/tWvOMAsEFX

Why are people like Quinn so desperate to defend the right to murder defenseless children? It seems they will go to any lengths necessary to protect this heinous crime.

Well, there’s actually a number of reasons for this. One is that they want to be able to indulge in reckless sexual behavior without the fear of any consequences, stripping sex of its true purpose and value as a tool to bring a man and wife into deep union with one another.

Secondly, progressives want to create whole generations of individuals who view the state as their parents, creating a loyal bond that cannot be broken. To do this the state must come off as knowing what is best for its “children,” which is impossible to do as long as the traditional family unit exists.

So they set about to destroy that through encouraging sex outside of marriage, homosexuality, transgenderism, divorce, and of course, abortion.

This is why those of us who are pro-life must fight longer, harder, and more passionately for these unborn children who are having their lives taken away unjustly. If we cannot defend the right to life, if we cannot protect the family unit — which is the backbone of the country — then we are doomed to fail as a society.