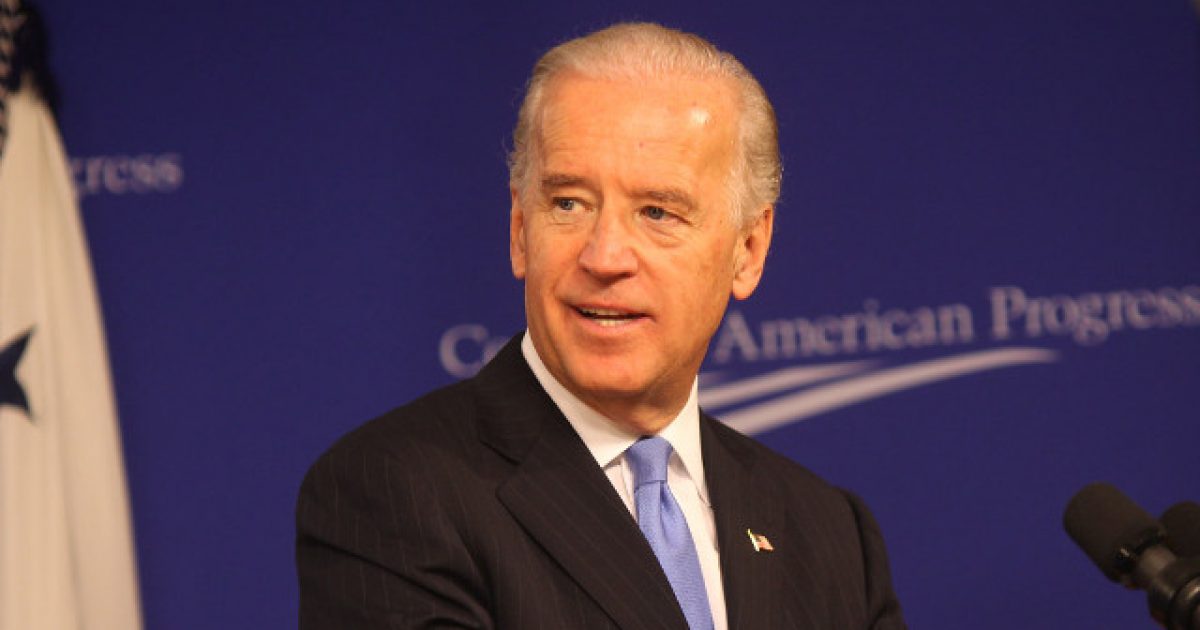 When accusations of sexual harassment become something that a presidential candidate can openly joke about with no problems whatsoever, particularly when he’s from the Democratic Party who is supposed to be on this whole #MeToo kick about fighting this sort of thing, you know you’ve become a full blown hypocrite.

At a recent campaign event for former Vice President Joe Biden who is running for president in 2020, one of the creepy fellow’s supporters made it clear that the accusations against him are no big deal to her.

In fact, she yelled out that Biden could ‘hug and kiss her anytime.’ Blech.

In a moment caught on camera and pushed out on Twitter by NBC News’ reporter Mike Memoli, one of the rally attendees, who identified herself to NBC News afterwards as Libby Peterson, yelled out an emphatically non-#MeToo statement to Biden.

“You can hug and kiss me anytime, Joe!” Peterson shouted.

The audience erupted, while Biden nervously made the sign of the cross in mock repentance, prompting even more laughs.

Hear it for yourself. Said not far from where Biden was introduced by Lucy Flores in 2014 pic.twitter.com/2qL8FszJLH

As Memoli notes, the moment occurred just a few miles from the much-reported encounter between the then-vice president and Nevada’s Democratic candidate for lieutenant governor, Lucy Flores, back in the 2014. It was Flores’ accusation that opened the floodgates on “unwanted touching” allegations against Biden. In an account published by The Cut on March 29, Flores detailed her encounter with Biden at a rally in 2014 that “changed how I saw Joe Biden”:

I found my way to the holding room for the speakers, where everyone was chatting, taking photos, and getting ready to speak to the hundreds of voters in the audience. Just before the speeches, we were ushered to the side of the stage where we were lined up by order of introduction. As I was taking deep breaths and preparing myself to make my case to the crowd, I felt two hands on my shoulders. I froze. “Why is the vice-president of the United States touching me?”

I felt him get closer to me from behind. He leaned further in and inhaled my hair. I was mortified. I thought to myself, “I didn’t wash my hair today and the vice-president of the United States is smelling it. And also, what in the actual fuck? Why is the vice-president of the United States smelling my hair?” He proceeded to plant a big slow kiss on the back of my head. My brain couldn’t process what was happening. I was embarrassed. I was shocked. I was confused. There is a Spanish saying, “tragame tierra,” it means, “earth, swallow me whole.” I couldn’t move and I couldn’t say anything. I wanted nothing more than to get Biden away from me.

“I’ve never thought of politics as cold and antiseptic; I’ve always thought about connecting with people. As I said, shaking hands, hands on the shoulder, a hug, encouragement,” he said. “Now it’s all about taking selfies together; social norms have begun to change, they’ve shifted, and the boundaries of protecting personal space have been reset, and I get it. I get it; I hear what they’re saying. I understand it and I’ll be much more mindful; that’s my responsibility. My responsibility and I’ll meet it.”

Biden was already joking about the accusations a couple of days after releasing his video at another campaign event, stating that he got permission in advance to hug IBEW President Lonnie Stephenson.

.@JoeBiden after being introduced by @IBEW International President Lonnie Stephenson: "I had permission to hug Lonnie."

Later on in the event he put an arm around a young boy who was part of a group of children brought on stage, quipping, “By the way, he gave his permission to touch him.”

Now just imagine for a moment that a conservative accused of inappropriate touching apologized for it and then started cracking jokes like a bad stand up comedian. The man’s whole career would be turned to ash and he’d never work in the public square again.

Yet, for whatever reason the left seems to be okay with one of their own doing this sort of thing, especially since that individual probably stands the greatest chance of taking Trump out in the election next year.

How sad is it that these people are willing to sell out their principles in order to win an election, just because they hate the man in the Oval Office so much?