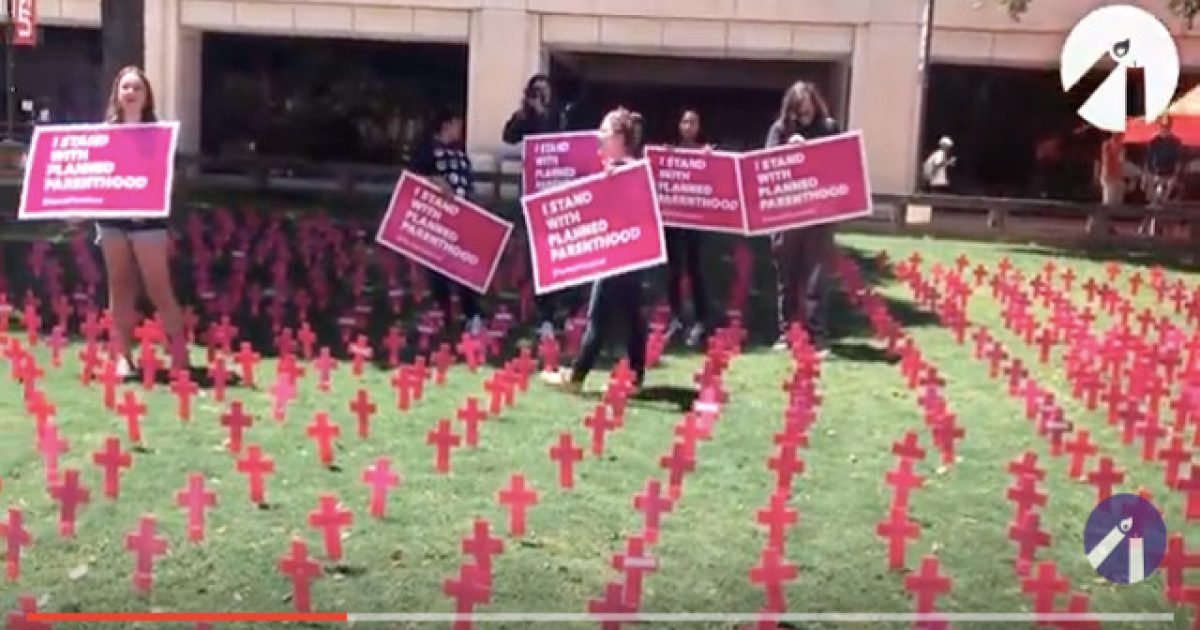 Students who support the baby murder mill Planned Parenthood were filmed enthusiastically mocking the murder of unborn children by dancing and singing disgusting songs through a pro-life display known as the “Cemetery of the Innocents.”

Ladies and gentlemen, these individuals who participated in this mockery are godless, soulless state-worshipping ghouls who have been indoctrinated with over a decade of hard left thinking in public schools all across the country. This sort of thing is happening all the time. Please pay attention to what your kids are being taught in government schools.

The Students for Life chapter that created the display caught the vulgar mockery from members of the school’s Students United for Planned Parenthood group on video.

“Stop, hey, hey, what’s that sound, all the fetuses are in the ground!” sang one female student, dancing in the mock cemetery. She also led chants with the other pro-abortion protesters in support for Planned Parenthood and bragged about getting an abortion herself. “Look, there’s mine right there!” she said, pointing to one of the crosses representing a killed unborn child. Another female student joked that they should “kiss in the fetus graveyard” and said getting an abortion is her biggest “kink,” according to StudentsForLife.org.

In a report posted to the pro-life group’s website, Sarah Zarr, the Texas Regional Coordinator for Students for Life, said the protesters took to their display immediately after it was set up. “Some of the members came to talk to us but would not have dialogue they just wanted to shout their points at us. One girl told me I was using my white privilege and ‘wasn’t allowed to be out there talking about this issue when it affects black women,’” Zarr recalled.

The group also had a table with pro-life literature set up. A male protester picked up three stacks of literature from the table and ran off, said Zarr. A pro-life student at the table named Mica chased after him and asked for their materials back, but he “threw it all in the gutter,” she claimed.

If this doesn’t make you weep for the future of our country, what will? These are young people who have been betrayed by an entire generation who have allowed them to be brainwashed into becoming loyal to the state, seeing the state as their parent, and participating in the destruction of the traditional family unit through the support of abortion.

It’s disgusting. Unfortunately, we have only ourselves to blame. The government convinced us all that it was okay for them to take over education, that we could trust them to take care of our kids and provide us all with free daycare. Look where it has led us to.

Progressives want to create a familial bond with future generations so that they can convince these folks to give up their rights and liberty to the “elites” who will “take care of them” and make their choices for them. Can’t do this without destroying the loyalty one has to his own family unit. That’s what abortion is really about for the left.

Is this how the greatest nation in the world will fall? By offering up their unborn children as sacrifices on the altar of false gods like pleasure and career? Please pray that our nation repents and turns back to God. If not, we will surely be judged for the kind of sickening behavior seen in this video.