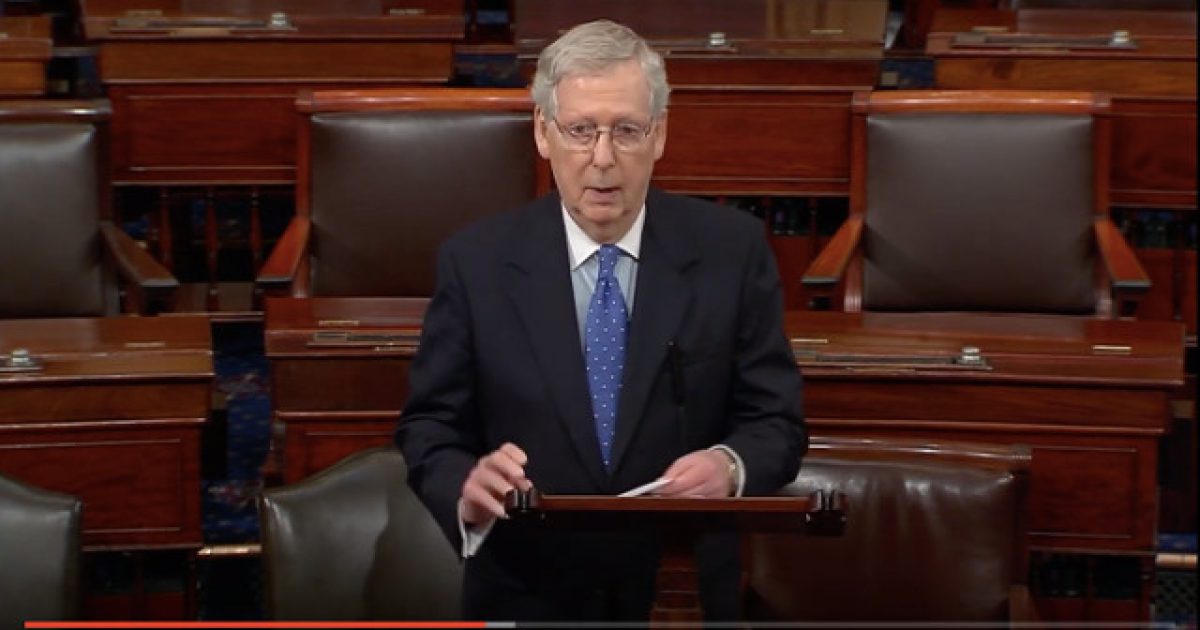 Senate Majority Leader Sen. Mitch McConnell took an opportunity during the Tuesday morning floor speech to mercilessly mock Democrats who have been mourning the loss of opportunity to remove President Trump over collusion with Russia via the Mueller report, saying they’ve been “publicly working through the five stages of grief.”

“They told everyone that there’d been a conspiracy between Russia and the Trump campaign,” McConnell said. “Yet on this central question, the special counsel’s finding is clear: Case closed!”

McConnell said the 22-month Russia probe’s findings “ought to be good news for everyone,” but added that his Democratic colleagues “seem to be publicly working through the five stages of grief.”

The five stages of grief are denial, anger, bargaining, grief, and acceptance. Using that framework, McConnell then went on to elaborate on his metaphor.

“The Democrats are angry — angry that the facts disappointed them, angry that our legal system will not magically undo the 2016 election for them,” he continued. “And they’ve opted to channel all their partisan anger on to the attorney general. They seem to be angrier at Bill Barr for doing his job than they are at Vladimir Putin.”

After pointing out all the things that Barr didn’t do to cover up the report, McConnell remarked that it was “hard to see” why Democrats are so angry.

“Maybe our Democrat colleagues are thinking of some strange new kind of cover-up where you take the entire thing you’re supposedly covering up and post it on the internet,” the senator quipped. “The claims get more and more utterly absurd.”

McConnell then skipped over bargaining and got straight to stage four: grief. He pointed out how the “outrage industrial complex that spans from capital press conferences to cable news” are grieving over the investigation’s findings.

“So now they are slandering a distinguished public servant because the real world has disappointed them,” he added. “Instead of taking a deep breath and coming back to reality, our colleagues across the aisle want to shoot the messenger and keep the perpetual outrage machine right on on going — even undermining the institution of the attorney general itself in the process.”

McConnell concluded with some tongue-in-cheek hopefulness for the fifth stage.

“The last stage of grief is acceptance,” McConnell said. “For the country’s sake, I hope my Democratic friends will get there sometime soon. There are serious issues the American people need us to tackle.”

You know, Mitch McConnell isn’t always the best representative of the conservative position for many issues, but he certainly knocked this one out of the park.

It’s pretty clear that Democrats have fallen apart the last few weeks since the report was put out and the conclusion that neither Trump nor his campaign participated in any collusion with Russia was reached.

They really have been in mourning over the whole thing, but it seems that many of them are refusing to get to that fifth stage, which is acceptance. They are still fighting to nail Trump with something. Now that collusion is off the table they are hoping to establish that Trump obstructed the investigation.

Why are they trying so hard to get him? Because the 2020 election is coming up and they don’t want to face off against him, because they’re afraid they’ll end up losing big again. Look how they fell to pieces when Hillary lost in 2016.

Can you imagine how tore up they’ll be if they lose again. If Trump is running they know they don’t stand much of a chance, so why not try to remove him from the equation?

Let’s hope they mature soon and just accept things for what they are and start tackling the issues that matter to the American people.