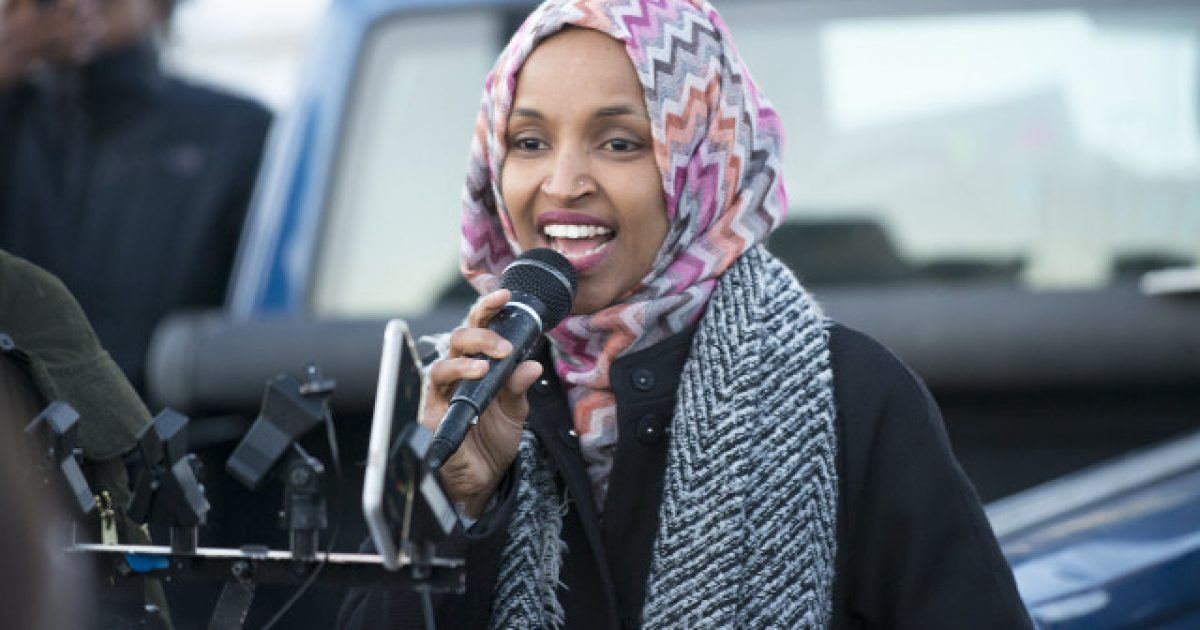 Rep. Ilhan Omar, notorious for her anti-Semitic remarks and belittling the terrorist attacks of 9/11 decided that she hasn’t done enough to make people despise her yet so she decided to attack conservative people of faith from the House floor.

Has anyone else had enough of Omar yet? It seems she’s really starting to overstay her welcome.

“I rise today to defy the horrifying attacks happening against women’s reproductive rights all across this country,” Omar began.”Religious fundamentalists are currently trying to manipulate state laws in order to impose their beliefs on an entire society, all with complete disregard for voices and the rights of American women.”

“The recent efforts like those in Alabama, in Georgia, are only the latest in a long history of efforts to criminalize women for simply existing, to punish us when we don’t conform to their attempts to control us,” Omar continued.

Omar continued by highlighting other measures across the U.S., saying that if they were happening anywhere else on Earth that they would be considered “a dangerous violation of human rights.”

“But because it’s happening here with the support of the ultra-conservative religious right, we call it religious freedom,” Omar continued. “Let’s just be honest, for the religious Right this isn’t simply about their care or concern for life. If they cared about or were concerned about children, they would be concerned about the children that are being detained and those that are dying in camps across our borders, or the children who are languishing in hunger and facing homelessness.”

“This isn’t about religious morality or conviction because we’ve seen time and time again those that talk about their faith and want to push policies because of their faith are the ones that simply are caught with the hypocrisy of not living it out in their personal lives,” Omar said as she noted two examples of Republican lawmakers who made decisions in their personal lives that were contrary to their political views.

“I am frustrated every single time I hear people speaking about their faith and pushing that on to other people because we know those so-called religious politicians, when it comes to their life, their choices, they want to talk about freedom,” Omar continued. “But when it comes to other people’s lives and other people’s choices, they want to talk about religion. This should outrage every single person. It certainly outrages me and we can no longer stand for it.”

Rep. Ilhan Omar (D-MN) attacks conservative people of faith on the House floor, suggests that their concern for unborn babies is not genuine and they are hypocrites pic.twitter.com/XGiWwB51GV

Okay so the real question we need to be asking here is whether or not Omar would still be saying these sort of things if the people standing up against abortion were Muslim.

Seems the likely answer would be no. But since these folks are, for the most part, Christians, it’s totally okay to bash them over and over again.

But hey, you know, it’s not like the attacks are a surprise. Jesus Himself told us that we would be hated by the world. The reason for this is because Christians have the Holy Spirit who works through us to convict a wicked and unruly world of their cosmic treason against a holy, righteous God.

Nowhere is that more clear and evident than when it comes to the slaughter of the unborn. These are image bearers of God who are being murdered and denied their basic God-given right to life. This is something that God abhors, which is why so many Christians take bold stands against it.

Let’s pray God raises up even more folks in this modern generation to proclaim his truth and defend the defenseless.