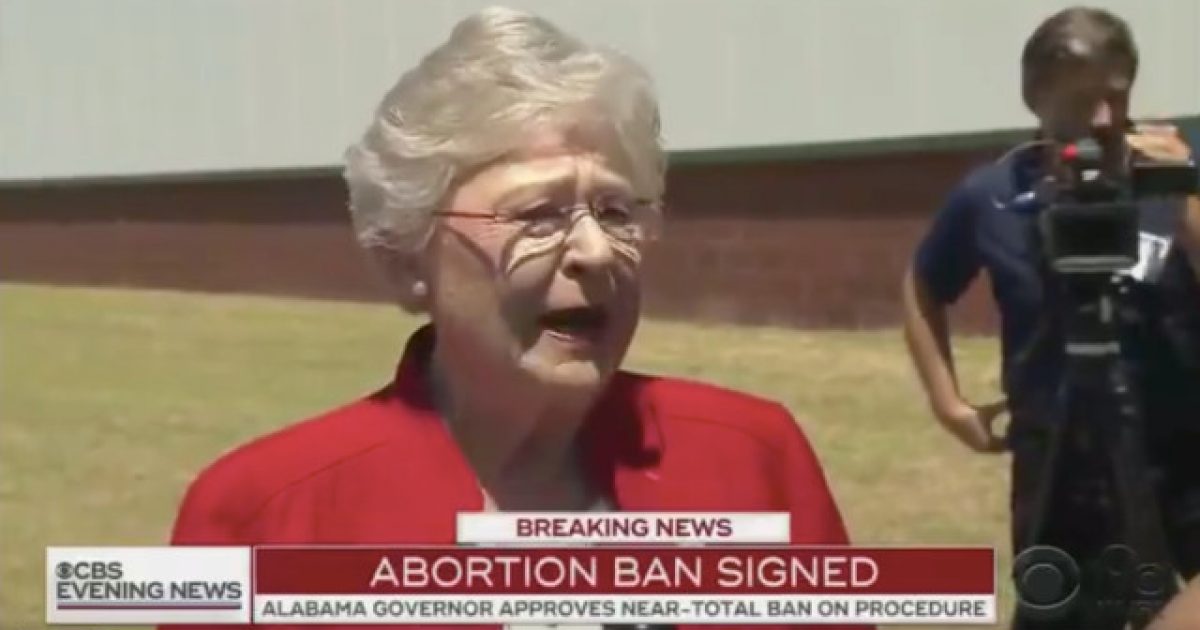 On Wednesday, Alabama Gov. Kay Ivey was set to sign the most anti-abortion bill in the nation, but before she did she faced down a CBS reporter who fired off a hostile question. To say that her response left the reporter devastated would be an understatement.

This is pure fire.

CBS reporter Jericka Duncan asked, “Where is the money coming from to support people who aren’t ready to be mothers or aren’t financially stable to take care of a child?” Ivey fired back, “You simply cannot defer protecting the lives of unborn children because of costs.”

CBS's @JerickaDuncan to Alabama @GovernorKayIvey before she signed the #AlabamaAbortionBan bill: "Where is the money coming from to support people who aren't ready to be mothers or aren't financially stable to take care of a child?" Ivey fired back you can't put a $$ on life. pic.twitter.com/wHMCNsOsGJ

Ivey served as Alabama State Treasurer from 2003 to 2011, then served as lieutenant governor from 2011 to 2017. She became Alabama’s second female governor and first female Republican governor after the resignation of Governor Robert Bentley; she won a full term in 2018.

Ivey has not flinched from holding staunchly conservative positions; in April 2017 she signed into law a bill stating that juries that imposed capital punishment could not be overruled by judges. Frank Knaack, executive director of Alabama Appleseed, asserted, “We should all agree that if we have a death penalty then the process should be fair and accurate. SB 16 will help minimize unreliable and arbitrary death sentences and move Alabama one step closer to ending its outlier status. We commend Senator Brewbaker, Senator Sanders, and Representative England for their leadership in this effort. And, we thank Governor Ivey for her quick action to finally put an end to judicial override in Alabama.”

In May 2017, Ivey signed into law a bill that prevented voters from voting for one party in a primary and another party in its runoff elections. State Sen. Tom Whatley commented, “It helps the Democrats choose Democratic candidates, it helps the Republicans choose Republican candidates. It just prevents the cross-over voting so you get a pure general election with a Democrat and a Republican.”

You see, the mainstream media has had free reign to slam and smash on conservatives, particularly those who stand up for the lives of the unborn, for a long, long time. That era came to an end the moment Donald Trump was elected president and showed that we don’t have to take this crap from the media or anyone else.

Trump has made a reputation for himself by smashing on the left-wing media outlets in this country and it has empowered many folks to take a stand without fear, to fight back as it were.

This is an especially important stand to take when it concerns the pre-born and the protection of their right to life. We must not cower in fear of the hard questions, but equip ourselves with truth that we might boldly proclaim our worldview and expose the wickedness of the left.