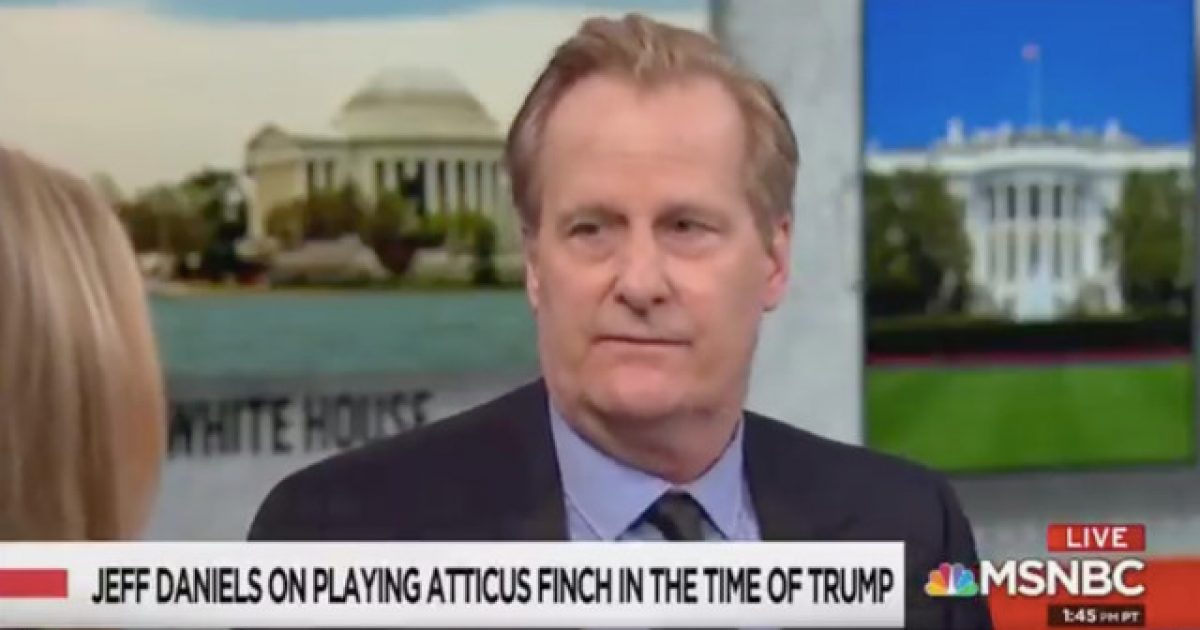 Hollywood actors, by their very nature, have a flare for the dramatic, which should be obvious, otherwise they wouldn’t be getting paid millions of dollars to pretend to be other people.

Actor Jeff Daniels, however, is taking the melodrama to the next level by comparing Trump supporters to the KKK and warning that if President Trump wins the 2020 election, it will bring about the end of democracy as we know it.

Told you it was dramatic.

Daniels, who is starring in Broadway’s current production of “To Kill a Mockingbird,” compared Trump’s rallies to a line from the play: “A mob is a place where people go to take a break from their conscience.”

“That’s what I see when I look at Donald Trump’s rallies, that’s when I see the lies he’s spewing at these people, and people going, ‘I gotta believe in something,’ and he said he’d bring my manufacturing job back and he didn’t … but at the end of the day, it’s race. It’s race,” the actor claimed, according to Deadline.

Daniels then broadened it to a “wing” of the Republican Party: “This is about the Republican Party — or a wing of it — going: ‘This is our last chance to save the party. And if we don’t, it’s the end of the Republican Party.’ And the only way they can do that was to tap the race button and say, ‘Go ahead, it’s OK.’ And [Trump] did,” he said. “And they did. That was the only card they had left to play, and they played it. And they aren’t going to go quietly.”

Earlier during the sit-down, the actor called his performances on Broadways a “wake-up call” for “white liberal America.”

“You walk out there and we pin the ears back of, basically, white America. White liberal America comes in, and they go, ‘We had no idea it was that tough.’ It’s a slap in the face; it’s a wake-up call,” he said.

Daniels then compared Trump supporters to KKK members and suggested that believing they have good intentions is dangerous and enabling. Deadline reports:

[Daniels] cites a moment in the play when the KKK is coming for Finch and his daughter Scout recognizes one as their neighbor and compares it to when Daniels asked his fellow Michiganders about the 2016 election results and they said, “Yeah, isn’t it great?” He then notes how Finch’s defending his neighbors by saying, “I know these people, they’re good people,” but “he’s an apologist, he’s an enabler,” Daniels said.

Then came the warning we heard far too often leading up to the 2016 election about Trump: “If the big gamble is to go all the way to November 2020 … and lose, that’s the end of democracy.”

Okay, Mr. Daniels, it’s time to go back on your meds now because you’re back to your old ways, talking all kinds of insane tinfoil hat theories about the end being nigh and all that.

People like Daniels have gone off the reservation ever since Trump won in 2016, though to be fair, they were never really on it to begin with. Their ideas have always been nuts, but now that they’re so distraught over Trump and the success he’s having, they’ve opted to stop hiding their wackiness and just go all out with it.

The end of democracy would be a good thing anyway. Democracy is mob rule, which is what the left wants becauses, well, that’s all they have is a mob.Groupthink is the backbone of their entire ideological system.

What the world needs is not democracy but democratic republics. Which is what we’re supposed to have, but big government progressives have been working on destroying that system for many, many years now, and unfortunately, they seem to be succeeding.

Daniels and other left-wing Hollywood ilk don’t understand how this all works, but that doesn’t stop them from sharing opinions no one asked for.