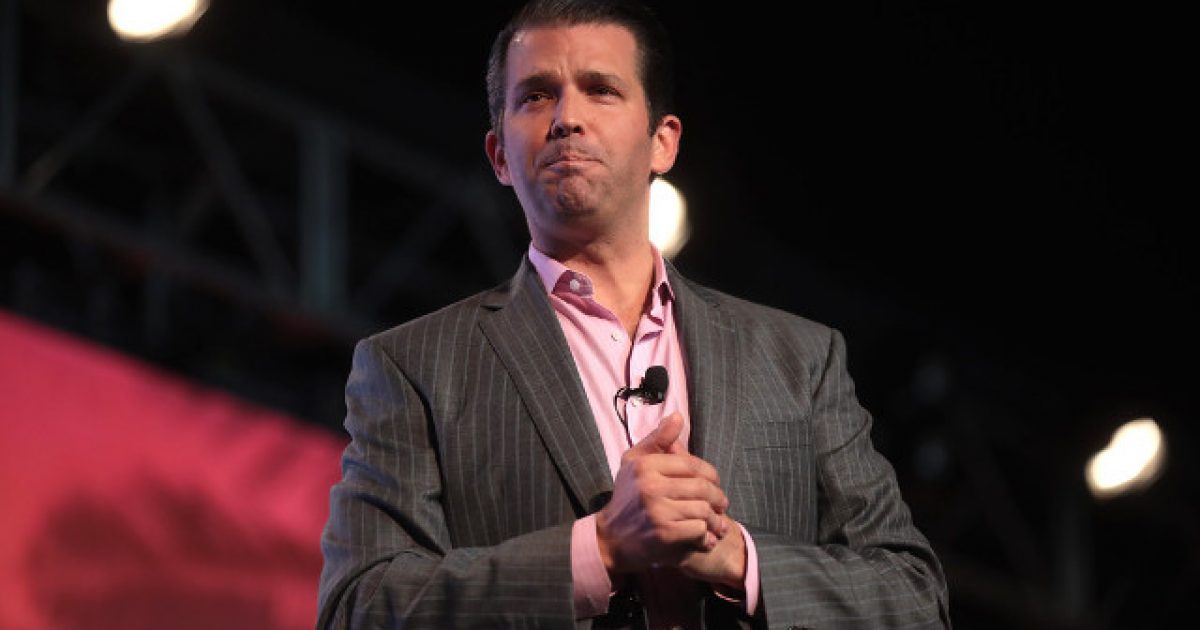 President Trump’s son, Donald Trump Jr., has been subpoenaed by the GOP led Senate Intelligence Committee to answer questions about the dozens of hours of testimony he gave related to the Russia probe — which found no evidence of collusion, by the way — further dragging this whole fiasco out.

“The subpoena sets up a fight that’s unprecedented in the Trump era: A Republican committee chair pit against the Republican president’s eldest son,” Axios, who broke the story, reported Tuesday. “Mueller, whose investigation did not find a conspiracy between the Trump campaign and Russia, did not indict Trump Jr., despite speculation that he would,” the outlet noted later, adding: “The fact that they’re subpoenaing Trump Jr. is a strong signal that he declined a request to appear before the committee again.”

The subpoena may have been prompted by former Trump lawyer and convicted felon Michael Cohen claiming that Trump Jr. knew more about the “Trump Tower Moscow” deal than he had stated during congressional testimony, Axios suggests.

In a statement to The Daily Wire, a source close to Donald Trump Jr. slammed the subpoena as an “obvious PR stunt,” noting that he has already given 8-9 hours of testimony in front of the Senate Intel committee and over two dozen hours total in front of various committees.

“Don is a private citizen, who has already been cleared by Mueller after a two year investigation. He has done 8-9 hours of testimony in front of Senate Intel already and 27 hours of testimony in front of various committees in total,” the source told The Daily Wire Wednesday. “When he originally agreed to testify in front of the Senate Intel Committee in 2017, there was an agreement between Don and the Committee that he would only have to come in and testify a single time as long as he was willing to stay for as long as they’d like, which Don did. Don continues to cooperate by producing documents and is willing to answer written questions, but no lawyer would ever agree to allow their client to participate in what is an obvious PR stunt from a so-called ‘Republican’ senator too cowardly to stand up to his boss Mark Warner and the rest of the resistance Democrats on the committee.”

Trump Jr. hasn’t issued a full statement as of this writing, but he did express his thoughts and feelings on the whole matter online through a series of tweets.

.@DonaldJTrumpJr has already spent dozens of hours testifying in front of Congressional committees. Endless investigations—by either party—won't change the fact that there was NO collusion. It's time to move on. It’s time to focus on ISSUES, not investigations. https://t.co/fbFH5uMLUz

With the strongest economy that we've seen in 50 years, now is the time to work together to solve actual problems. pic.twitter.com/C8xhrwG5aR

Apparently the Republican chair of the Senate Intel Committee didn’t get the memo from the Majority Leader that this case was closed… https://t.co/jvV5PIX266

It’s safe to say the vast majority of folks in America, especially Trump’s conservative base, are ready to move on from this whole debacle.

The report clearly states there’s no evidence of collusion, therefore, there was no collusion. There was no cheating in the 2016 election. Trump won things fair and square, showcasing that the American people rejected liberal policy and political correctness, hungering for liberty and economic success.

If the left doesn’t understand this is what happened, if they can’t simply wrap their minds around why anyone would reject Obama’s legacy and their crappy policies that cost so many people their jobs, stopped businesses from expanding, raised taxes, and screwed people out of their doctors and insurance coverage, then they might be dumber than we all originally thought.

Perhaps if they spent the kind of energy they’ve wasted on this Russia probe on actually getting to know what matters to Americans and would pull themselves back to the center, they’d actually stand a chance next year against Trump. Their refusal to move on is very telling and will doubt hurt them in the long run.