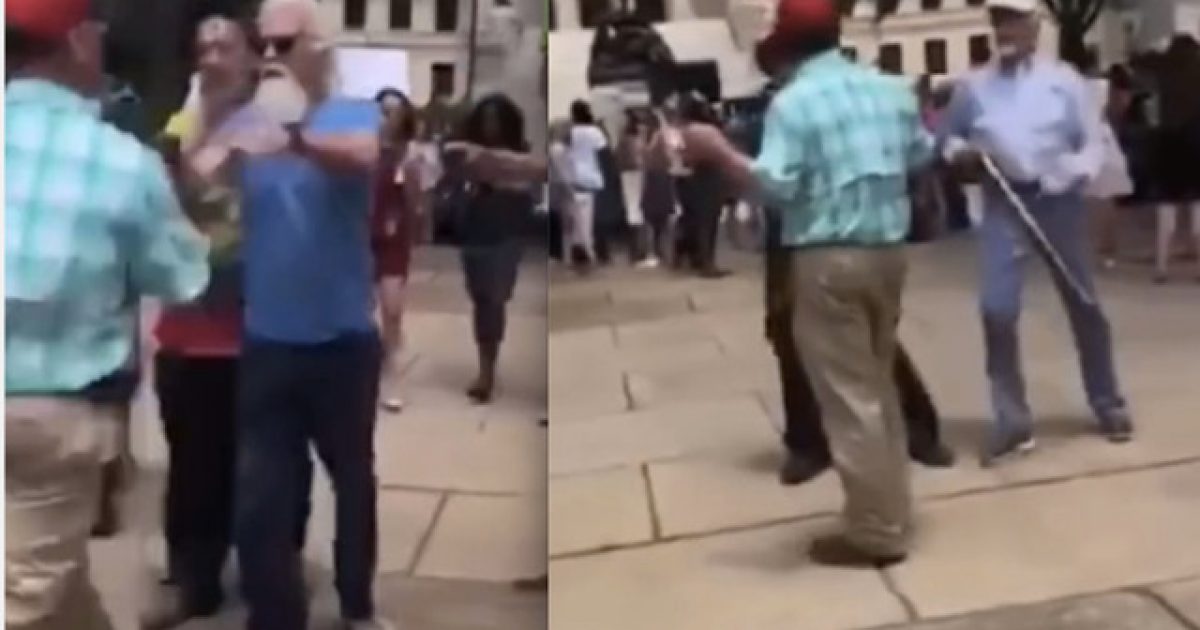 A video is making its rounds across the Internet, showing a pro-life activist getting hit with a cane and then shoved by pro-abortion Demonstrators, while a cop stands by and simply waves the victim away.

This is appalling on just about every level and is a perfect example of the kind of hate and hostility that rolls off those who are desperate to protect child murder. It’s disgusting.

Pro-choice advocates gathered outside the Mississippi Capitol in Jackson on Tuesday to protest the state legislature’s bill banning abortions once a fetal heartbeat can be detected.

Video showed Boyd talking to and walking toward the pro-choice demonstrators, trying to convince them that “babies in the womb” are “human beings.”

With that a pair of men walked up to Boyd — and things quickly got physical.

One of them holding a cane was seen using it to jab Boyd, who replied by saying, “Call the cops. He just hit me with his cane.”

The other man confronting Boyd told the man with the cane to not touch the pro-life activist.

Soon another pro-choice advocate in a tie-dyed shirt approached Boyd and repeatedly said, “F*** off, jackass,” before yet another appeared among the growing crowd, shoved Boyd backward, and also said, “F*** off.”

The pro-choice demonstrator who urged his fellow activists to not get physical told Boyd that he’s “disturbing a meeting” and should leave — but Boyd kept right on speaking.

“We are shedding innocent blood!” he told the pro-choice crowd. “And we as a people will stand before God!”

When Boyd told them “Jesus said he is the way, the truth, and the life,” that pro-choice activist who wanted him to leave replied that he’s seen Boyd at abortion clinics “spitting on women” and accused him of being a “hypocrite.”

“You call yourself a Christian,” the man told Boyd.

Boyd then walked up to a police officer and informed him he had been assaulted. The cop does nothing but wave Boyd off.

How sick and disgusting is this display of violence by the left? If they disagree with Boyd’s point, they have every right to express their own beliefs in a civilized manner. They do not, however, have the right to employ violence against a peaceful man standing up for what he believes in.

It’s disturbing the great lengths people are going to these days to defend the murder of pre-born children in the womb. They’re willing to commit acts of violence in order to continue slaughtering children.

Don’t believe in demonic forces at work in our world? This right here should convince you otherwise. This clearly goes beyond the sins of mortal human beings. Pro-life folks are winning the battle and as a result, satanic forces are fighting back.

Now is the time to press the battle forward, preaching the truth of God’s Word and being willing to have our blood spilled in order to protect these children and their right to life.