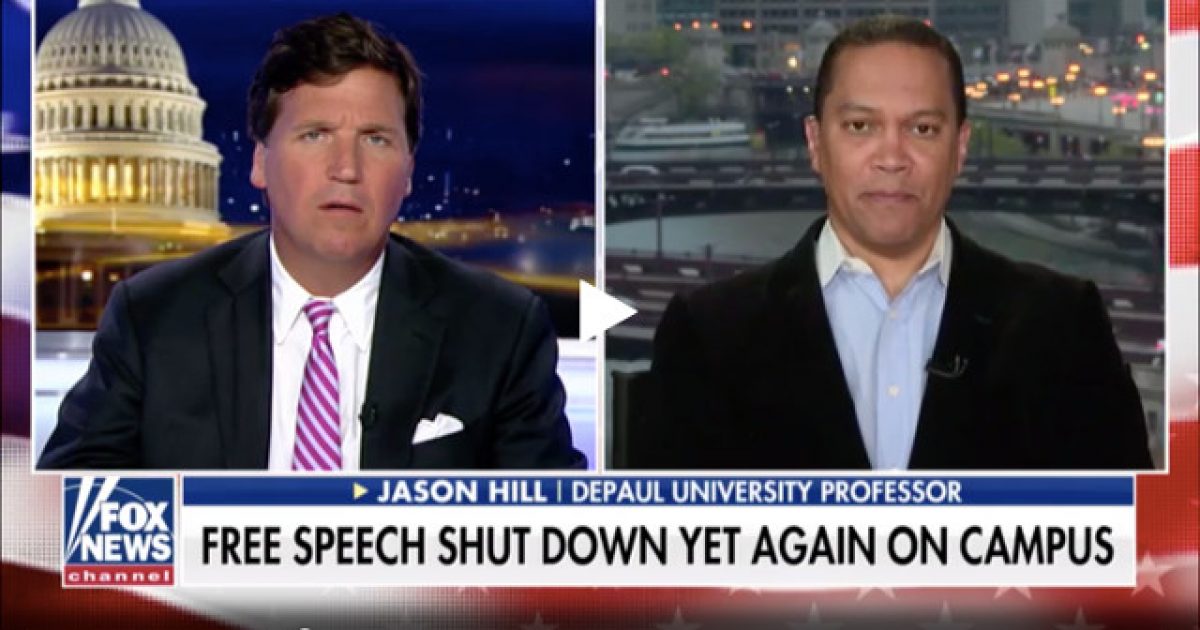 On Wednesday, Fox News host Tucker Carlson had DePaul University Professor Jason Hill, who happens to be very pro-Israel, on his show to talk about how the faculty of his university condemned him for his stance on the Jewish nation, giving in to the demands of thousands of students who wanted to see him censured for an article he published on The Federalist titled, “The Moral Case For Israel Annexing The West Bank — And Beyond.”

The faculty called the article “an abuse of academic freedom.”

However, the response Hill gave to the backlash is truly inspiring. He said, “I’m a conservative independent who speaks his mind very clearly and will not be silenced.”

We need more like this guy, don’t you agree?

According to Fox News, “Hill has faced death threats since the article’s publication and said he needs security to get around campus.”

Carlson started by pointing out, “You can agree or disagree, but at the college where he works, the faculty were so offended by it that they launched a campaign to destroy him. Thousands of students signed a letter calling on the school to censure him and tonight the faculty voted to condemn his article as ‘an abuse of academic freedom.’”

Carlson turned to Hill: “So, you took a position that not everybody agrees with but it does have a fairy large constituency; it’s not an unheard-of position, and it’s certainly no crazier than what most of your colleagues are saying on a day-to-day basis. Why are you being censured for that?”

Well, I’m being censured because I’ve taken a very positive, pro-Israeli stance in a very anti-Semitic culture, and on college campuses that are pushing for BDS movements and divestment against Israel. And I’m a conservative independent who speaks his mind very clearly and will not be silenced. In that article, aside from defending Israel, I made the point that Israel was the only democracy amidst a bunch of illiberal and primitive regimes that do not respect the inalienability of human rights and individual rights, and I think students took offense and individuals, faculty and people at large took offense at me defending Israel and defending my right to defend Israel’s rights to defend itself against a war that was launched against it in 1967 by Jordan.

The students have claimed that I am racist, that I am xenophobic, have called for my removal, that I am an Islamophobe, and that I am guilty of advocating ethnic cleansing and genocide, which I am not.

Carlson went on to show a clip of a protest against Hill that took place on the DePaul campus, asking Hill what they were looking at.

Hill responded by saying, “Well, I was not there, but I think you’re looking at the Arts and Letters building in the DePaul campus in which students are calling for my removal, are calling for the president to fire me; calling for my downfall; calling for Professor Hill to be dumped; all sorts of nefarious accusations against me. I was made aware of that video only yesterday and then saw it.”

Hill says the students were throwing down quotes from the article he wrote, along with some of his tweets, sections of his book, “We Have Overcome” which is a defense of Israel and American exceptionalism.

This just goes to show you how much power kids have these days over the affairs of their professors. Isn’t the whole point of going to college to learn from those who have spent years mastering their fields? Yet here are students challenging teachers who are trying to ensure they get their money’s worth by having an education that is well rounded and provides both sides of an issue. Unbelievable.

Let’s hope that more conservative professors come out of the woodwork to throw support behind Hill and to boldly stand for the principles they believe in, because if we don’t start coming together and fighting back, we’re going to lose whole generations to progressive thought.