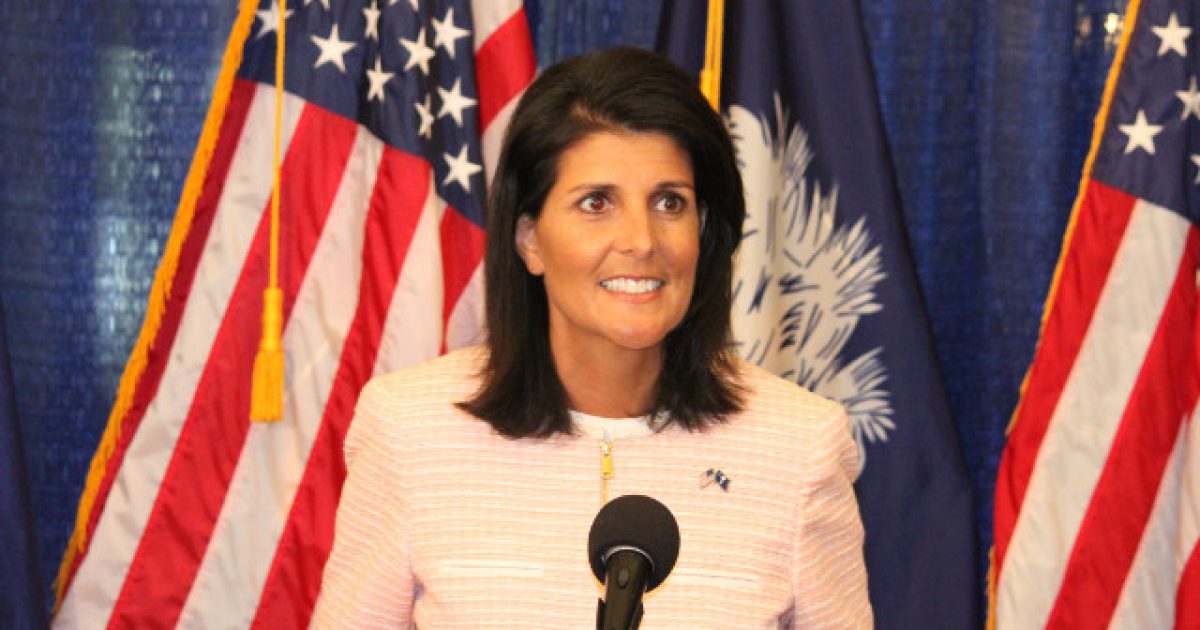 Everyone’s favorite anti-Semitic Congresswoman, Rep. Ilhan Omar, has come out recently and pointed the finger at America for the humanitarian and economic crisis that is rocking the socialist “paradise” of Venezuela, which is something that did not at all sit well with former U.S. United Nations Ambassador Nikki Haley.

Because, you know, there’s no possible way that the reason Venezuela is suffering right now is due to the incontrovertible fact that socialism doesn’t work.

“A lot of the policies that we have put in place has kind of help lead the devastation in Venezuela and we have sort of set the stage for what we’re arriving today,” Omar said in a Wednesday interview on Democracy Now. “This particular bullying and the use of sanctions to eventually intervene and make regime change really does not help the people of countries like Venezuela and it certainly does not help and is not in the interest of the United States.”

WOW: @IlhanMN says the U.S. has "helped lead the devastation in #Venezuela," and accuses the U.S. on "bullying" the Maduro regime.

Apparently Maduro's starvation of his people and armored trucks running them over in the streets is not worthy of criticism in her eyes. pic.twitter.com/leTcRHWDVd

Following several days of clashes between Venezuelan dictator Nicolas Maduro’s forces and protestors — some of whom were run over by Maduro’s military vehicles — Nikki Haley, former U.S. United Nations Ambassador, was not letting Omar get away the remarks.

“The avg Venezuelan adult has lost 24 lbs. Babies have no medicine. Families have to walk miles in the heat to get the only meal they may have that day,” Haley tweeted at Omar. “All bc of the corrupt Maduro regime. Your comments are so far from the truth. Cuba and Russia appreciate your support.”

.@IlhanMN the avg Venezuelan adult has lost 24 lbs. Babies have no medicine. Families have to walk miles in the heat to get the only meal they may have that day. All bc of the corrupt Maduro regime. Your comments are so far from the truth. Cuba and Russia appreciate your support. https://t.co/o1ADtlwrtN

Russia has been giving tremendous support to the Maduro regime. Just last week, Russia sent around 100 military advisors and 35 unidentified tons of equipment to Venezuela to help with the crisis. On Tuesday, Secretary of State Mike Pompeo claimed that Maduro had an airplane ready to flee the country to Cuba but “the Russians indicated he should stay.”

Haley hasn’t been shy about her criticism of the Maduro regime, frequently speaking out against the socialist dictator, including attending an anti-Maduro protest outside the U.N., speaking with those who showed up to the event with a megaphone.

“We need your voices to be loud, and I will tell you going to tell you the United States voice is going to be very loud,” Haley said to protestors. “I can tell you that I talked with President Trump and he is fired up about this. He is angry at Maduro. His comments were we are not just going to let the Maduro regime backed by Cuba hurt the Venezuelan people anymore.”

Haley has been continuing to speak out about what’s happening in Venezuela even after stepping down from her post at the U.N.

America & most of our Latin Amer friends are sending desperately needed humanitarian supplies to the starving people of Venezuela. Now Maduro won’t let food come into the country. And who is standing with him? Russia.Putin stands with every brutal dictator in the world. Unreal!

The reason there’s so much turmoil going on in Venezuela is because of the application of socialism to the country’s system of government. Socialism defies the universal rules for how economics work, taking away incentive for hard work and innovation. It decimates resources and takes from the have-nots to give to the haves.

You know how redistribution of wealth works? It makes everyone equally poor. It doesn’t help even the playing field by making everyone wealthy or ensuring everyone is cared for. It does exactly the opposite.

Omar, in her criticism, is just looking for yet another reason to espouse hate for the country she calls home, the same nation that allows her to create an easy-breezy career in politics where she can make a lot of money for very little effort.