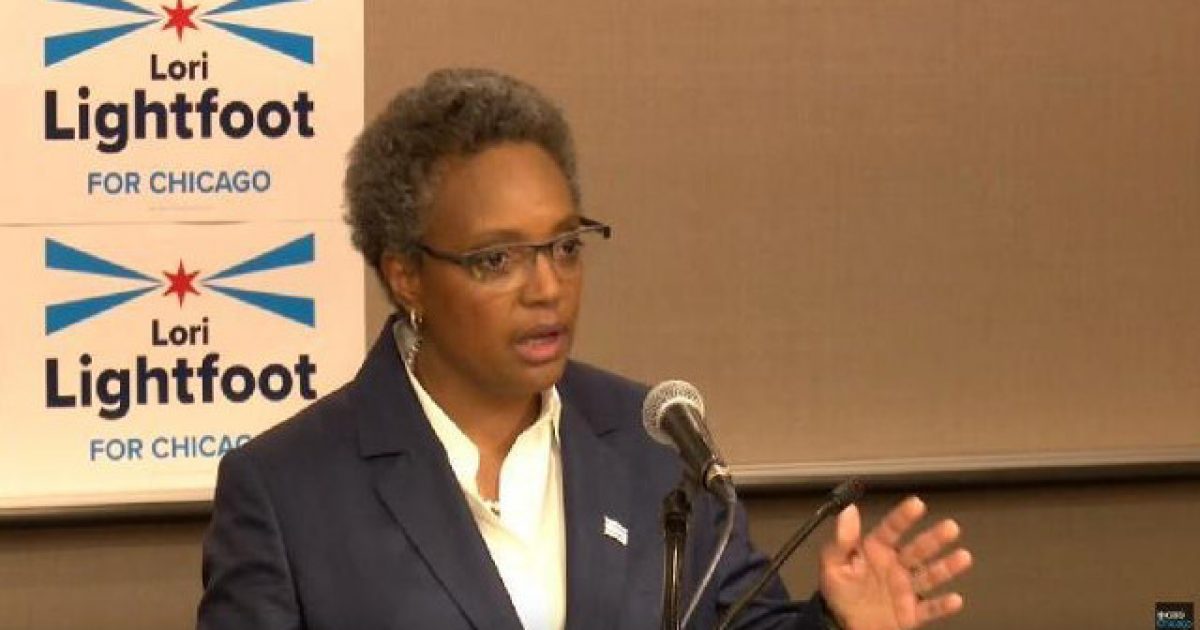 The newly elected mayor of Chicago, Lori Lightfoot, who also happens to be the first female African-American to serve in the position, apparently doesn’t want the Chicago Police Department to protect her.

Why not? Because according to her, it’s a “very dangerous time in our country.”

Lightfoot hired a private company to oversee her security detail, noting that “it’s a very dangerous time” in the U.S.

Retired Deputy U.S. Marshal James Smith will head up the mayor’s security detail. Smith is also a managing partner at Silver Star Protection Group, according to the Chicago Tribune.

Smith retired from the U.S. Marshals after 26 years of service.

According to the Chicago Sun Times, Lightfoot’s security detail will be comprised of “four or five” retired law enforcement officials from any agency besides the Chicago Police Department.

Lightfoot, who is openly gay, is a former assistant U.S. attorney and was elected in April. She previously co-chaired the city’s Task Force on Police Accountability after 2014’s fatal police shooting of Laquan McDonald. The task force issued a decidedly negative report on the city police, intimating that Chicago police officers had violated civil rights during arrests.

The Sun Times spoke with one of Lightfoot’s aides about the move, and when asked if there was a heightened threat level for the mayor, the aide responded, “Just think about it. It’s a very dangerous time in our country.”

So what was the Chicago PD’s response to this nonsense?

Chicago Police Superintendent Eddie Johnson did not offer specific details on the appointment.

“We don’t really comment on executive protection, but at the end of the day, the mayor has to be comfortable with her detail,” Johnson said. “This is her police department now.”

Chicago Fraternal Order of Police President Kevin Graham told the Sun Times that he and his organization are none too happy about the appointment and the decision to leave local police out of the security detail.

“For as long as anyone can remember, Chicago Police have provided the security for the mayor of this city,” Graham said. “They have done an outstanding job, no matter who was the mayor.”

He added, “Those jobs are done by the Chicago Police officers, and we at the FOP intend to keep it that way.”

All this is really doing is adding to the liberal left-wing narrative that local police aren’t trustworthy folks to keep us safe. Instead they are potentially violent racists who are trigger happy for an opportunity to shoot an African-American.

That’s what the left wants you to believe. This, of course, isn’t true. There are plenty of excellent law enforcement officers in the country who are motivated to put their lives on the line for the citizens of the local community they are sworn to protect, regardless of a person’s color.