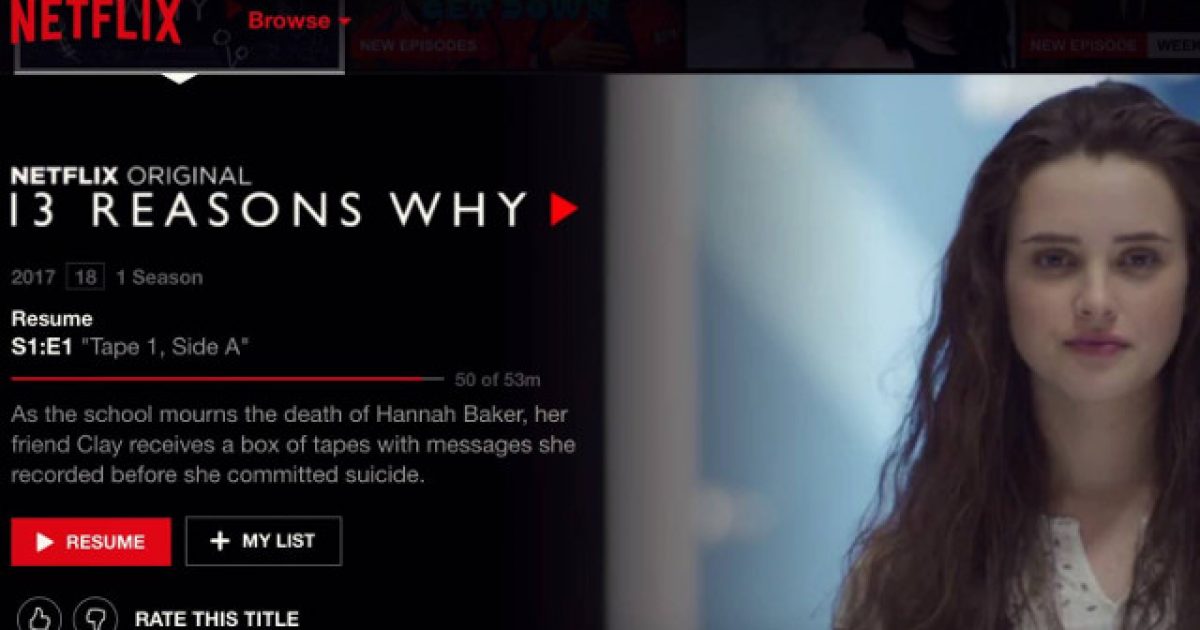 A new study has just been published by the Journal of the American Academy of Child and Adolescent Psychiatry and it has found that depictions of youth suicide in film, television, and other forms of entertainment can potentially be harmful to young people.

The report found that after the 2017 debut of the Netflix original series “13 Reasons Why,” — a show that centered around teen suicide — youth suicides went up 29 percent. The season finale of the program culminated in a teenage girl crawling into a bathtub after making 13 videos outlining her reasons for committing suicide and slitting her wrists, ending her life.

Following the release of the popular Netflix show, the U.S. youth suicide rate was 28.9 percent higher among children ages 10-17 when compared to previous years, according to the study. The surge was primarily attributed to adolescent males, the study found.

Researchers in the study, which was released on Monday and backed by the National Institute of Mental Health, did add that the findings did have limitations and that they could not make a definitive and direct link to the popular Netflix show.

Researchers concluded that their findings “should serve as a reminder to be mindful of the possible unintended impacts of the portrayal of suicide, and as a call to the entertainment industry and the media to use best practices when engaging with this topic.”

A spokesperson for Netflix told Reuters that they were aware of the study and are in the process of reviewing it.

“It’s a critically important topic, and we have worked hard to ensure that we handle this sensitive issue responsibly,” the spokesperson said.

Despite the fact these folks have this study in their hands and can see the quantifiable evidence that this type of programming increases youth suicide, a third season of the program is currently in production.

According to Chief Executive Reed Hastings, the show is “engaging” and “controversial,” but people don’t have to watch it.

This is true. No one has to watch it. Unfortunately, it seems that many parents of young people today are not being discerning when it comes to what they allow their kids to watch on Netflix.

It’s time for us as adults to step in and be more mindful of what our kids are consuming when it comes to entertainment, especially when the topic or theme of the movies, books, or television programs they enjoy are controversial.

This doesn’t mean we should support censorship of Netflix and force them to remove the show, as that makes us hypocrites. In the end, we need to take more authority over our own households and not allow kids to watch harmful things.