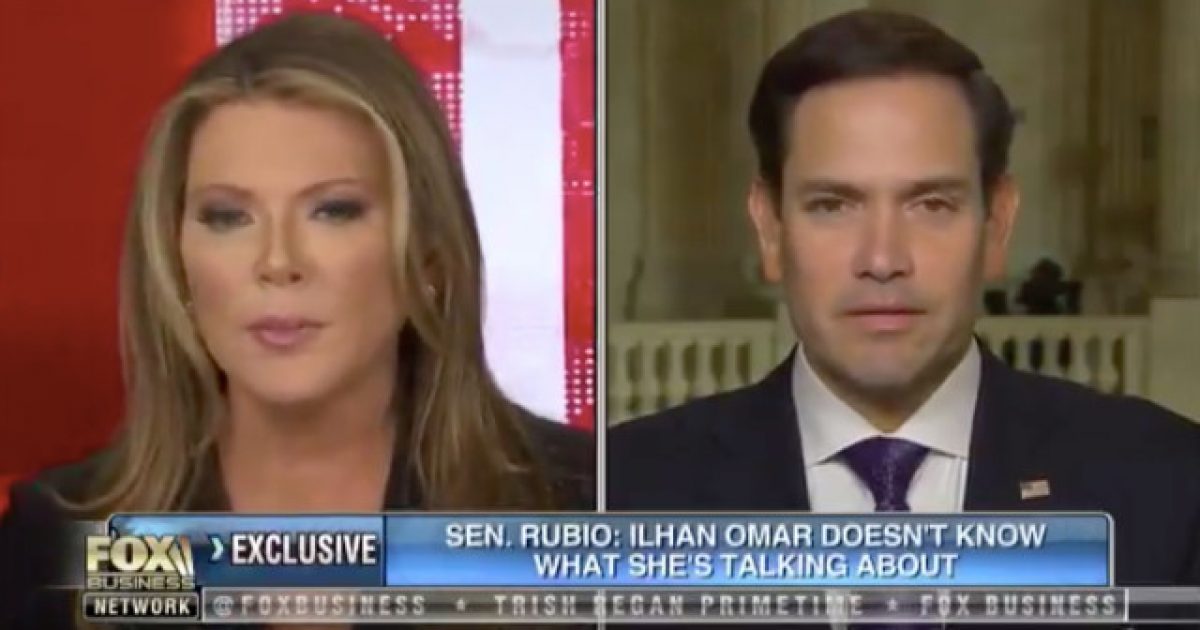 Florida Sen. Marco Rubio stopped by Fox News Business Network on Thursday, where he completely destroyed Rep. Ilhan Omar over her comments blaming the United States for all of the havoc unfolding in Venezuela.

Isn’t it hilarious how progressives in love with socialism slam America for not being socialist, then when they see the natural outworking of socialism and the disaster it brings, that still is somehow our fault?

On Wednesday, PBS anchor Amy Goodman asked Omar “if you can comment on what’s taking place right now in Venezuela, the U.S. supported coup attempt against President Maduro.” Omar answered, “A lot of the policies that we have put in place has kind of helped lead the devastation in Venezuela. And we sort of set the stage for what we’re arriving today, this particular bullying and the use of sanctions to eventually intervene and make regime change really does not help the people of countries like Venezuela and it certainly does not help, it’s not in the interest of the United States.”

Rubio interjected, “She doesn’t know what she’s talking about.”

Yeah, I think she was just recently elected, she has no idea what she’s talking about, she’s just making it up. She doesn’t even follow this issue, most of the people in Washington aren’t following this issue. She doesn’t know what she’s talking about. I mean, the sanctions that are on Maduro have been in place for two months, before that all the sanctions were on individuals.

She won’t find a single Venezuelan other than those in the regime that would even agree with, it’s ridiculous. They’ve stolen the money; they’ve degraded the country by literally stealing, they haven’t upgraded their, for example, their electric grid in 25 years. Any money that was ever made from the oil was stolen and put into people’s pockets. So honestly, I don’t even feel like addressing the comment because it’s not an informed one, it’s not an intelligent one. It’s silly, it’s ridiculous, and it’s actually embarrassing.

.@marcorubio on #IlhanOmar blaming the DEVASTATION in Venezuela on the U.S.: “She has NO idea what she’s talking about” #TrishRegan pic.twitter.com/JcrYo1Jy2g

That, my friends, is an epic takedown. Rubio himself has been heavily involved in the situation unfolding down in Venezuela, throwing heavy support behind acting President Juan Guaido. He also went on to state that if any troops in Venezuela blocked U.S. aid from coming in it would be a “crime against humanity.”

As you can see, this is a cause that’s near and dear to Rubio’s heart, so who better to school Omar than him?

What’s going on in Venezuela is the result of the full application of the socialist worldview to all of life. It’s a nightmare system that ignores the actual rules that govern our reality. Socialists here in our own government just can’t seem to accept the facts.