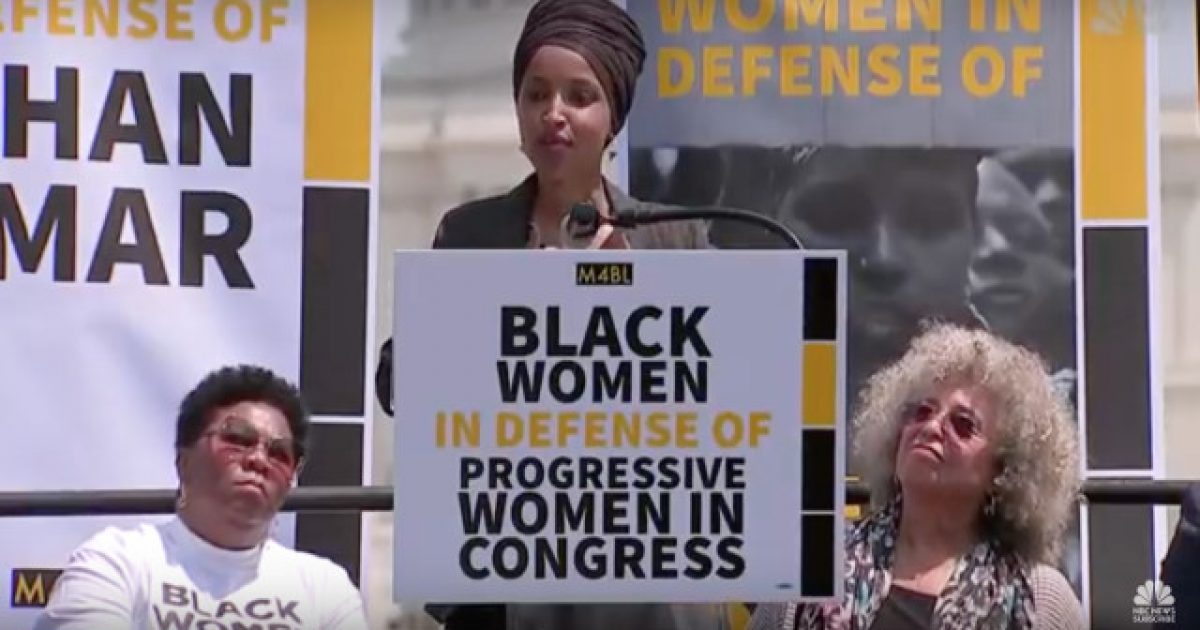 Everyone’s favorite unhinged anti-Semitic Congresswoman, Rep. Ilhan Omar, went off on President Trump and the Republican Party, pointing the finger at them for being the cause all the rampant anti-Semitism and Islamophobia sweeping the country.

Isn’t that just plain outright ironic? A woman who has spewed almost nonstop anti-Semitism since she took office is chastising the president and the GOP for inspiring anti-Semitism. Despite the fact that the GOP is a huge backer of Israel and has condemned this very same woman’s egregious comments.

The freshman congresswoman said that Trump and his political allies are to blame for a surge in anti-Semitism and Islamophobia in the U.S.

Fellow freshman lawmaker Rep. Rashida Tlaib (D-Mich.) was also in attendance at the event, which was held at the Capitol and called “Black Women in Defense of Ilhan Omar.”

“The occupant of the White House … and his allies are doing everything that they can to distance themselves and misinform the public from the monsters that they created that is terrorizing the Jewish community and the Muslim community,” Omar said, according to NBC News.

She added that talking about anti-Semitism is the same as discussing Islamophobia.

“[W]hen we talk about anti-Semitism, we must also talk about Islamophobia,” Omar insisted. “It is two sides of the same coin of bigotry.”

So let’s get this straight. Omar, who is notorious for spewing hatred against Jewish folk, is slamming Trump, the Republican Party for the same kind of junk that she spouts off about on a daily basis?

Is the Democratic Party so clueless, so tone deaf, that they refuse to deal with the more unruly individuals who make up their party who are destroying it from the inside out?

Clearly Omar has no room to talk on this particular issue and her comments are only going to go forward and cause greater division at a time when the United States needs to be reunited. Perhaps it’s time for the Democrats to find better, more well adjusted individuals to be the face of their organization?

It doesn’t seem like Omar really fits the bill.