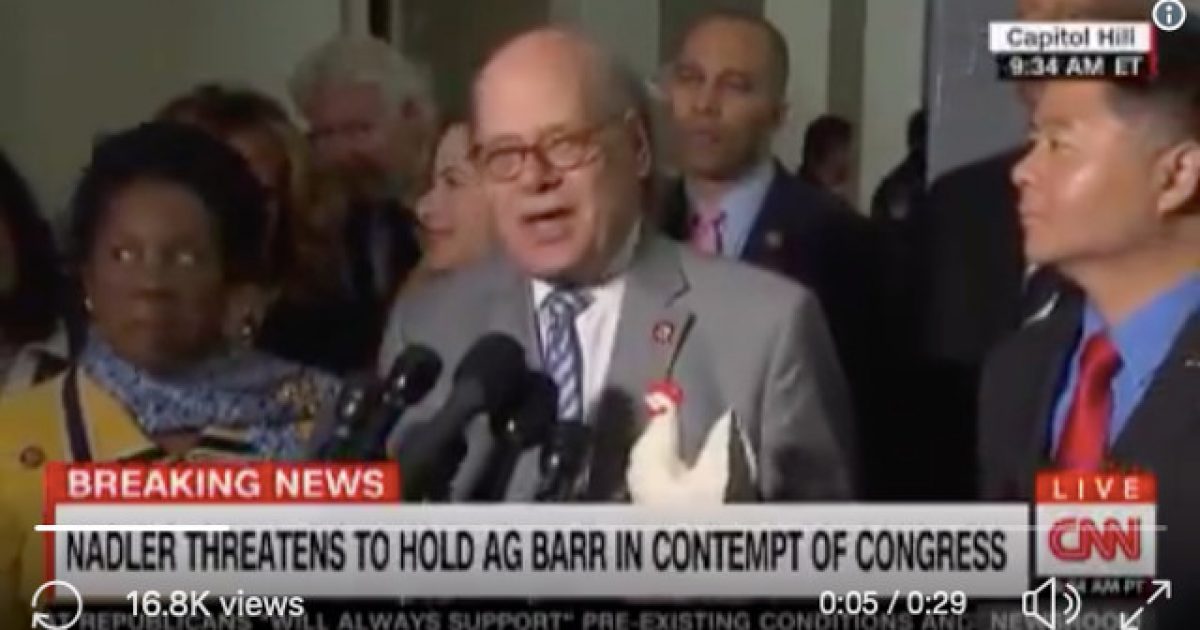 The House Judiciary Committee hearing that took place on Thursday took a very weird turn when Democratic Tennessee Rep. Steve Cohen showed up to the party with a rubber chicken and bucket of Kentucky Fried Chicken after Attorney General William Barr refused to appear.

The left-wing in this country keeps getting weirder and weirder.

Cohen sat in his seat in the committee room and ate the fried chicken, then brought the rubber chicken over to the seat Barr would have sat in if he had appeared before the committee. Cohen called Barr “#ChickenBarr” in a tweet on Wednesday night, as Democrats have continued to call for his resignation after testifying for five hours before the Senate Wednesday.

#ChickenBarr won’t be appearing before @HouseJudiciary tomorrow. The Attorney General shouldn’t be afraid of taking questions from counsel or members. Contemptible behavior. Fortunately, we have subpoenas ready. pic.twitter.com/a4QecbqcHN

Attorney General Bill Barr should have appeared before the #HouseJudiciaryCommittee, but he was afraid of being questioned by counsel. If he felt confident in the legality of his actions, he would not be afraid. #ChickenBarr is acting as a fixer. #CultureOfCorruption pic.twitter.com/XNZFkqmlPQ

“It’s a shame Members of the House Judiciary Committee won’t get the opportunity to hear from Attorney General Barr this Thursday, because Chairman Nadler chose to torpedo our hearing. The attorney general gave clear, informative testimony in the Senate Wednesday, as he offered to do more than a month ago in the House tomorrow,” Republican Georgia Rep. Doug Collins, the ranking member of the House Judiciary Committee, said in a statement Wednesday about the scheduled hearing with Barr.

This is a very childish sort of jab to take at Barr, but, let’s be honest. It is a little bit funny. Not to mention that KFC is still pretty tasty, so yeah, at least Cohen has good taste in grub.

At the end of the day it seems pretty unnecessary to have Barr testify. The left is still clinging to some sort of hope that something, anything, will be found in the Mueller report they can use to hang Trump out to dry.

First it was collusion, not it’s obstruction. Perhaps the Democratic Party would be better served at this point to focus on the 2020 election instead of continuing to try finding a way to impeach Trump?