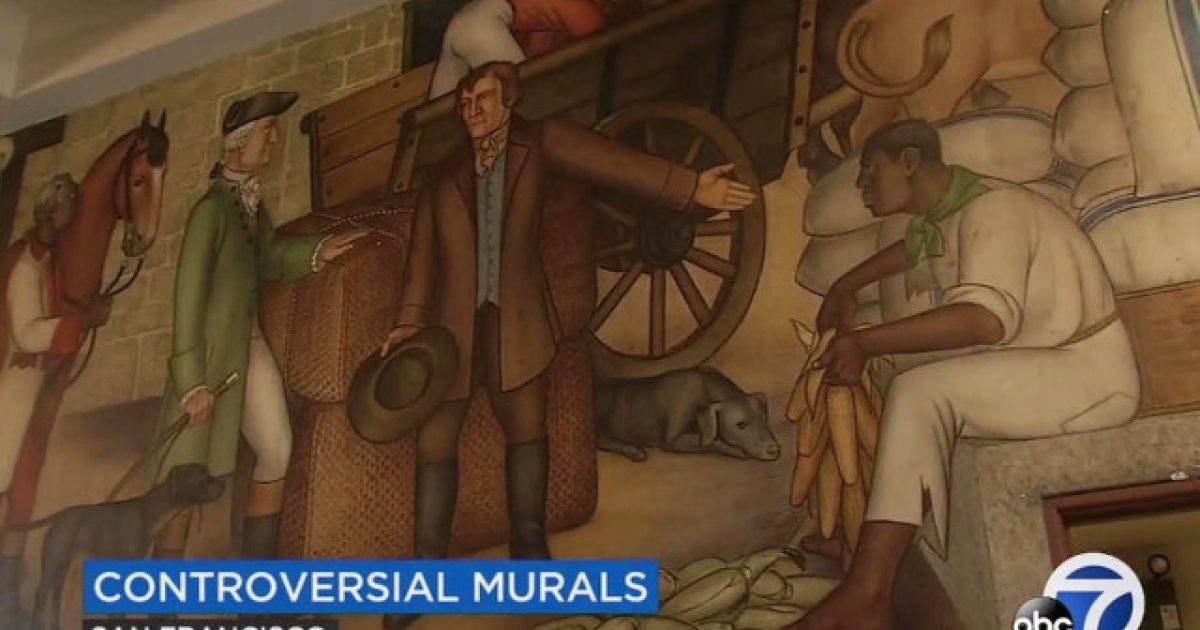 So a mural that depicts the life of our most legendary and beloved president, George Washington is in danger of being painted over at San Francisco’s George Washington High School because it “glorifies slavery, genocide, colonization, manifest destiny, white supremacy, oppression, and traumatizes students.”

Anyone else sick of living in the 21st century yet? Let’s invent a time machine and go back to before people were this insane, shall we?

Russian-American painter Victor Arnautoff created the mural series on the walls of the school before it opened in 1936, and at the time it was the “largest WPA-funded, single-artist mural suite on the Pacific Coast,” the Richmond District Blog noted.

But some of the mural’s images came under fire during the civil rights movement over its depictions of slavery and Native Americans, the outlet said:

In one mural, entitled “Mount Vernon”, George Washington appears to be in conversation with another Caucasian man who gestures towards a seated African-American man holding corn, presumably a slave. In other parts of the mural, African-Americans are engaged in acts of manual labor like hauling large bales of hay and picking cotton in the fields, while Caucasian men are also laboring at other tasks with tools. Washington’s servant, who is pictured holding his horse, is also African-American. The mural is a clear depiction of slavery in the United States, and of George Washington as a slave owner.

The second panel, entitled ‘Westward Vision”, depicts Benjamin Franklin and other founding fathers looking at George Washington as he points off in the distance, while he points with his other hand to a map. On the right side of the mural, as if carrying out Washington’s call for westward expansion, frontiersmen, depicted in greyscale unlike other figures in the mural, stand over the dead body of a Native American man, signifying the genocide of Native American life and culture.

In the bottom right of the “Westward Vision” panel, a frontiersman and Native American chief sit at a campfire smoking a peace pipe. On the ground at the chief’s feet is a tomahawk, symbolizing the disarming of Native tribes. Directly above the Chief’s headdress is a broken tree limb representing broken treaties made by the U.S. government with Native Americans, and broken promises made by settlers.

The school responded to all the controversy by commissioning new murals that show people of color in a more positive light.

Well, now the school district has created a “Reflection and Action Group” to decide what to do about the mural series due to a proposal that seeks to designate the high school as a historic landmark was introduced.

The group had determined that the entire life of Washington mural series should be removed and painted over.

We come to these recommendations due to the continued historical and current trauma of Native Americans and African Americans with these depictions in the mural that glorifies slavery, genocide, colonization, manifest destiny, white supremacy, oppression, etc. This mural doesn’t represent SFUSD values of social justice, diversity, united, student-centered. It’s not student-centered if it’s focused on the legacy of artists, rather than the experience of the students. If we consider the SFUSD equity definition, the “low” mural glorifies oppression instead of eliminating it. It also perpetuates bias through stereotypes rather than ending bias. It has nothing to do with equity or inclusion at all. The impact of this mural is greater than its intent ever was. It’s not a counter-narrative if [the mural] traumatizes students and community members.

What a sad time to be alive in America. Our history is slowly and systematically being erased and covered over, hidden as it were, by people who are so pathetically weak it’s almost disgusting.

This is how our story unfolded, warts and all. Isn’t it important to remember the past and learn from the mistakes of our forefathers? Not to mention Washington and many of the Founding Fathers were hoping that one day slavery would be totally destroyed and all men in America be free.

They knew this would be a difficult task, especially for the south who depended on this free labor to maintain their wealth, therefore they enacted the Three-Fifths clause, which prevented the south from having more representation than the north and enforcing slavery as an institution forever.

Unfortunately that’s not the story kids are taught. They’re taught that the founders only saw blacks as three-fifths of a person, which isn’t right at all.

Heaven help us when he lose our history and it gets rewritten by hateful progressives.