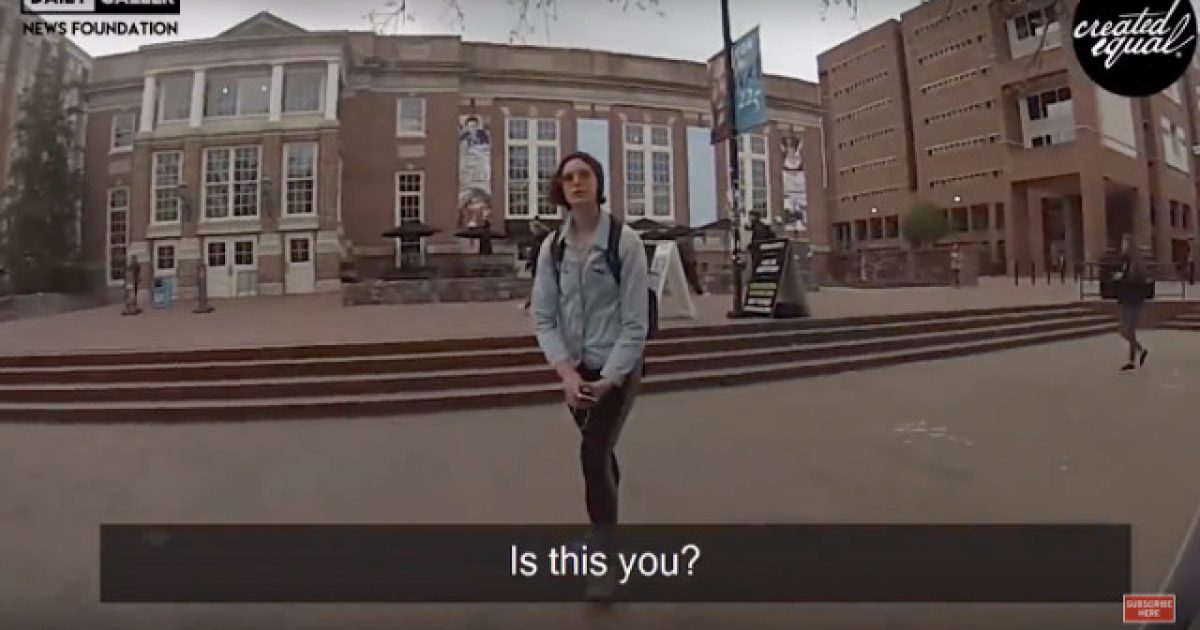 A video of a pro-abortion activist losing her ever loving mind and getting violent with pro-lifers during a pro-life demonstration is making its rounds across the Internet, but what’s really got people talking is how the pro-lifer responded to the situation.

This is truly amazing.

The woman approached a young male pro-life activist outside the University of North Carolina-Chapel Hill who was holding up pro-life signs.

The female activist then attacked the young man after becoming angry with the signs being held up. He was in the middle of discussing abortion with students on campus when the woman attacked him.

She can be seen approaching a group of people, demanding if the group was responsible for the pro-life signs. When they answer in the affirmative, she goes wild and begins screaming, using profanities, and physically attacking the male.

During her outburst, the woman — visibly irate — yells that the young man is a “terrible f***ing person,” the signs are not OK, and that “this is triggering.”

The young man in the video, later identified as Austin Beigel, addressed the incident on his Facebook page Tuesday.

In the post, Beigel wrote, “I was recently assaulted on campus at UNC while peacefully talking to students about abortion. Violence from abortion supporters is becoming more common. Look at what Mark Harrington, the president of Created Equal, had to say about the incident.”

“‘Pro-abortion activists are losing the argument, and instead of seeking debate they are escalating the violence on peaceful preborn defenders on college campuses. We will never cave to acts of violence or intimidation. We will return hate with love for mothers and their babies,'” he added.

Beigel continued, “I hope you pray for the heart of the young woman who attacked me, because ‘There but by the grace of God go I. Please consider supporting me and my wife so that I can continue bringing the truth in love to the many lost people in our country. Your donations make it possible for lives to be saved and changed by God through my ministry.”

There is no world that exists where this kind of behavior is acceptable in any way, shape, or form. This young lady ought to be ashamed of herself for such a display of violence and rage.

The left claims they are “tolerant,” but it’s clear they have no idea what that word actually means. Most pro-lifers are willing to sit down and have a discussion about the topic of abortion, in a civilized manner, but the left refuses to do this.

They’d rather lash out in anger, a phenomenon that has become more and more common these days. How many videos have surfaced recently of pro-life activists being attacked by crazy left-wingers? Tons.

At the end of the day, the pro-lifer activist is right. This woman needs prayer. She’s lost, stuck deep in a corrupt worldview that is leading her down a path of self-destruction and the destruction of others.

Jesus commands us to love our enemies. This isn’t an emotional love. You don’t have to have the “ooey-gooeys” for this woman. Love is a verb. We should be praying God rescues her soul before it’s too late.

At the same time, she totally deserves to be held accountable for her actions and should be charged with assault. Loving your enemies doesn’t mean being a doormat.