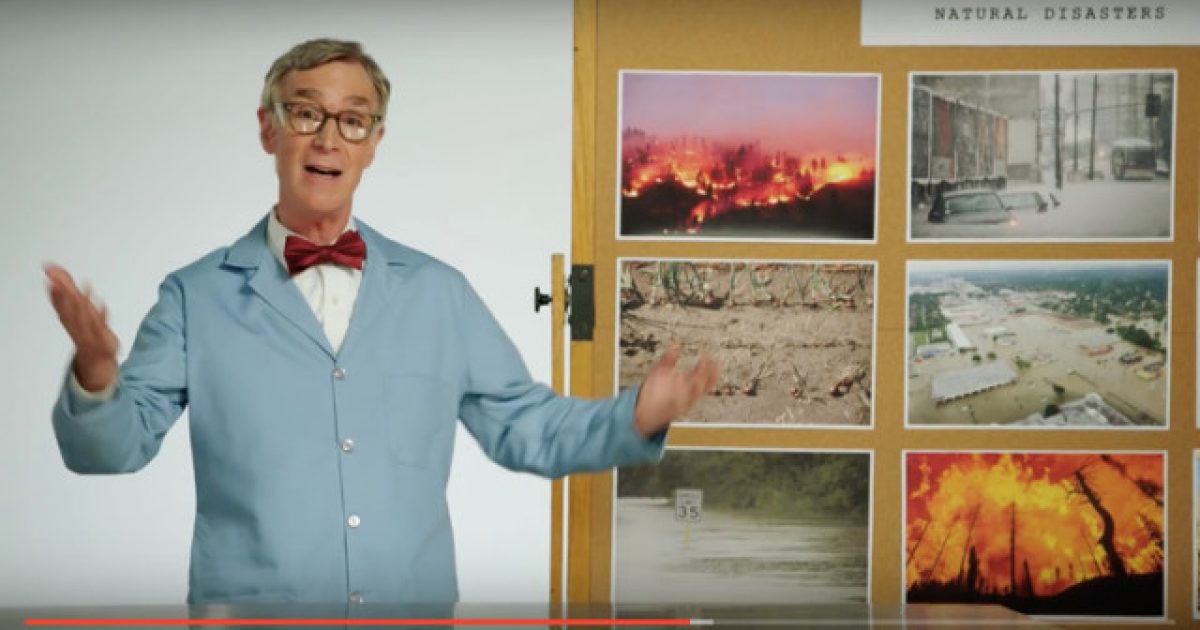 Bill Nye the Science Guy — if you were a child in the 1990s you likely now have that annoying theme song stuck in your head — recently made an appearance on “Last Week With John Oliver” where he had a nuclear meltdown and went on a profanity laced tirade about climate change.

Good thing this guy doesn’t still have a children’s show. Just imagine the level of indoctrination he’d be passing down these days. Yikes.

The late-night show host was also discussing a new report from the U.N. that warned that the planet could experience a lasting change as early as 2040 due to climate change.

Oliver went on to publicly implore Nye to present a visual to accompany Oliver’s remarks.

“Bill, please, please!” Oliver begged. “Do you have a fun experiment for us?”

An exasperated-looking Nye appeared on the video in his lab coat at a table stocked with a globe, a blanket, a fire extinguisher, and a pile of sand.

“Safety glasses on,” Nye said. “By the end of this century, if emissions keep rising, the average temperature on Earth could go up another 4 to 8 degrees.

With that proclamation, Nye pulled out a blowtorch and blasted the globe, which immediately burst into flame.

“There are a lot of things we could do to put it out.” he said, gesturing to the sand, blanket, and fire extinguisher, “Are any of them free? No, of course not, nothing’s free, you idiots!

“Grow the f*** up!” he cried. “You’re not children anymore! I didn’t mind explaining photosynthesis to when you were 12, but you’re adults now, and this is an actual crisis! Got it?!”

“Safety glasses off, motherf*****s,” he said, and blew on the flaming globe. When it was evident that he couldn’t extinguish the blaze, he walked out of the shot and waved it off, clearly disgusted.

Ohhh, so edgy. So dark and gritty. Old Billy Boy sure told us, didn’t he? Too bad the vast majority of folks around the world won’t see this video because nobody really pays attention to Nye or Oliver, so yeah. We dodged a bullet with this one.

No one should really take Nye seriously anyway because he’s not even a scientist. That being said, the real scientific data doesn’t necessarily back up the guy’s claim, so the hysterics and over-the-top dramatics about the end being nigh need to be tossed in the garbage.

The world is not ending any time soon. The science about man-made climate change is far from settled and there are a million conflicting reports out there to examine. It’s going to take time to really get to the bottom of the issue. Relax. It’s all going to be okay. Take a breath, Billy. Drink a beer and unwind.