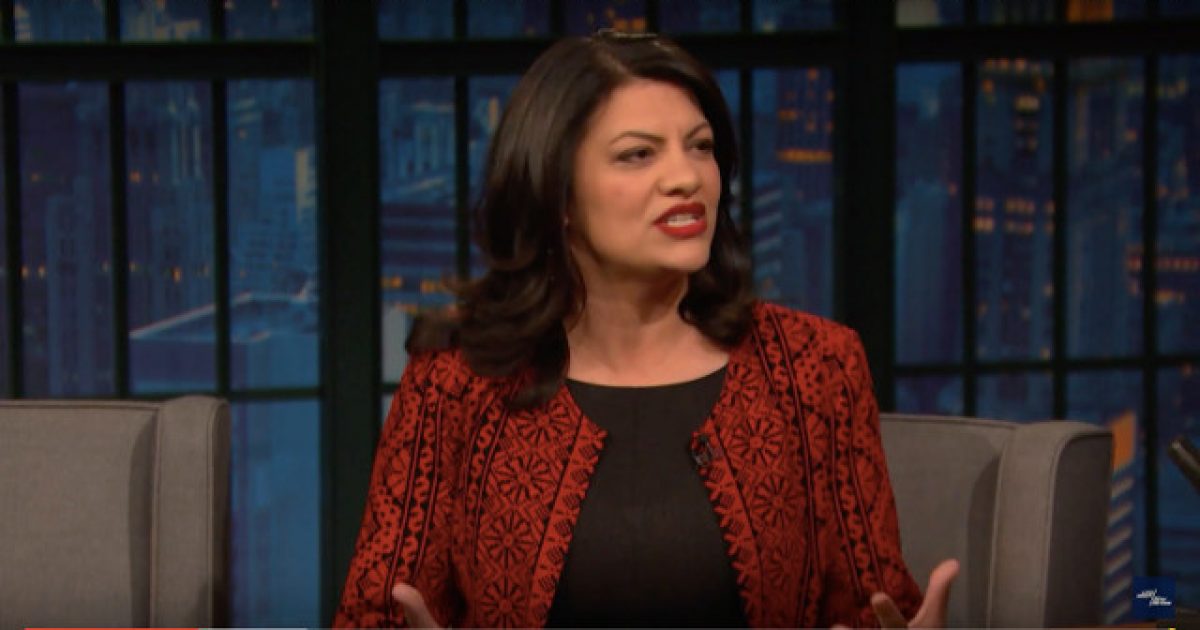 Muslim Congresswoman Rep. Rashida Tlaib just doesn’t know when to quit. She recently made some pretty vile remarks about the Holocaust, which earned her some well deserved blowback, but rather than learn from her mistakes and issue an apology for what she said, she digs the hole a little deeper.

Tlaib made an appearance on NBC’s “Late Night” where she told host Seth Meyers that a friend told her to start speaking at a fourth grade level so the “racist idiots” might be able to understand what she means.

Speaking on a podcast with Yahoo! News last week, the freshman representative said “a calming feeling” comes over her when she thinks of the Holocaust because her Palestinian ancestors sacrificed to provide a “safe haven” for Jews in the aftermath.

Tlaib’s comments were met with scathing rebukes from Republican leaders, whom she accused of twisting of her words. But even left-leaning outlet CNN scorned her revisionist history with a fact-check segment.

Meyers gave Tlaib an opportunity to “provide some context” on her remarks. She began by explaining that her grandmother “lives in the West Bank — in the occupied territories of Palestine” and asserted there was “something beautiful about the fact” that many of her ancestors had died or given up their livelihoods and “human dignity” to “provide a safe haven for Jews in our world.”

Tlaib then called the interpretation of her comments during the Yahoo! interview “unfortunate,” before telling Meyers, “You know, I got a text message from a friend who was like, ‘Hey next time, you know, really clarify, maybe talk like a fourth grader because maybe the racist idiots would understand you better.”

Meyers responded, “I actually think it wouldn’t hurt for all of us to talk about the history of that part of the world on a fourth grade level because I actually don’t think a lot of us here understand it.”

We all understand it just fine, Seth. The problem here is that Tlaib is either misinformed and spreading falsehood accidentally, or she’s knowingly spreading lies in an attempt to revise history to paint the Palestinians up as heroes because that fits her agenda and the narrative she pushes in Congress.

The Palestinians weren’t at all happy about the Jews returning to Israel and that conflict still plays out to this day, with the terrorists of radical groups like Hamas committing atrocities against the Jewish nation frequently.

Perhaps Tlaib ought to consider simply telling the truth if she doesn’t want to be the object of scorn.