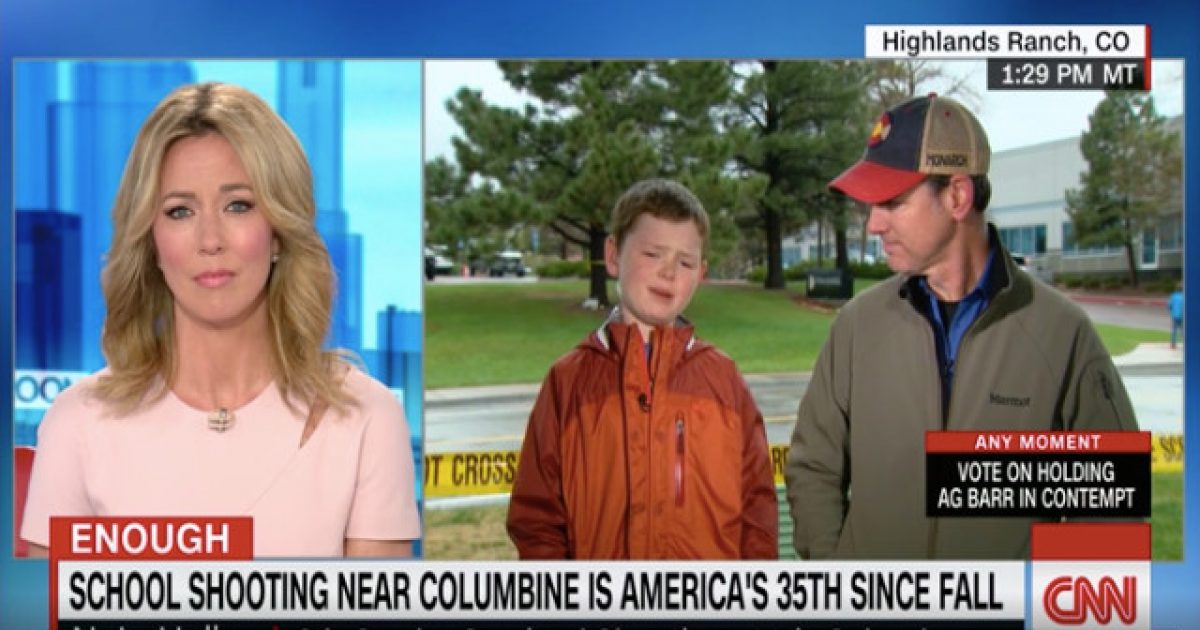 A 12-year-old boy who survived the horrifying shooting at a school in Colorado this week spoked with CNN’s Brooke Baldwin and his description of what he did during the incident left her absolutely speechless.

This is one heck of a brave and courageous young man. You can totally see law enforcement in his future.

Apparently during the attack sixth-grader Nate Holley got a hold of a metal baseball bat and was prepared to defend himself to the death if necessary.

The shooting took place at a STEM school in Highlands Ranch, Colorado on Tuesday. One student died in the incident as they rushed the shooter. Eight more students were injured. Local law enforcement took two students into custody in connection with the attack.

During a Wednesday appearance on CNN, Nate said that he and his classmates cowered in fear in their classrooms when gunfire rang out in the school.

“It was really chaotic,” he told Baldwin. “Most of the kids didn’t know what to do.”

Despite the panic, Nate froze until his teacher ushered him and his peers into a closet.

Baldwin, clearly at a loss for words, simply stared at Nate.

The boy’s father, Steve Holley, stated this is the third time he’s had to pick his son up from a lockdown.

There’s something seriously wrong with this area if there’s been this many lockdowns in such a short amount of time. Perhaps there’s more going on behind the scenes that people don’t know about?

Regardless, parents all across the country need to step up and start doing more to be involved in the lives of their children, to pay attention to warning signs of mental illness and other issues that might be pushing a child toward violence.

At the end of the day, this kid was super brave and strong to be willing to fight for his life. Not a lot of kids think this way, but he obviously has strong survival instincts. We should all be glad he didn’t have to use them.

Let’s hope sensible discussions and measures happen to make this school a safer place for students, rather than politicizing this and seeking to use it as another example to strip away people’s rights to defend themselves.