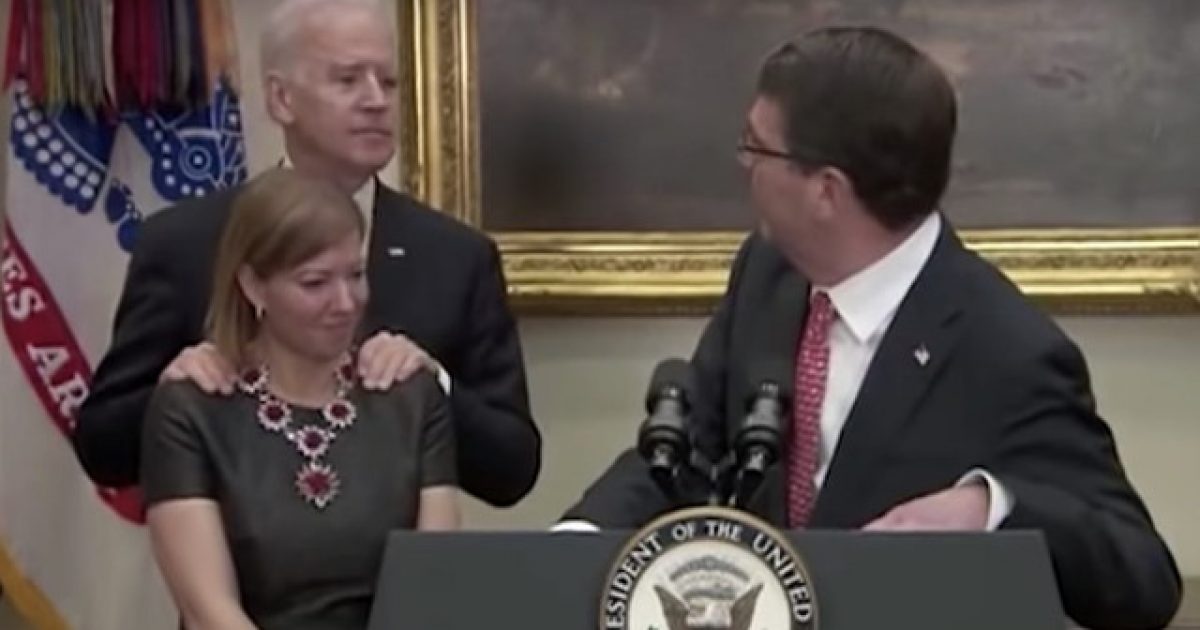 Former Vice President Joe Biden, who might be running for president in 2020, has found himself haunted by a photograph featuring him getting a bit handsy with former Secretary of Defense Ashton Carter’s wife Stephanie.

Well, that photo has resurfaced and this time, Stephanie Carter is telling her side of the story.

With multiple Democratic presidential candidates now calling for Biden to address the accusations of “inappropriate touching” from former Democratic nominee for Nevada lieutenant governor and Bernie Sanders supporter Lucy Flores, “Creepy Biden” pictues have begun circulating online, again. One of the most infamous of the photos features Stephanie Carter, the wife of former Secretary of Defense Ashton Carter. Like Flores, Carter has now published her own account of the moment, but unlike Flores, says emphatically that it was not a #MeToo moment.

In an account published by The Cut Friday, Flores describes an alleged encounter at a campaign rally in 2014 “that changed how I saw Joe Biden”: “I felt him get closer to me from behind. He leaned further in and inhaled my hair. I was mortified. I thought to myself, ‘I didn’t wash my hair today and the vice-president of the United States is smelling it. And also, what in the actual f***? Why is the vice-president of the United States smelling my hair?’ He proceeded to plant a big slow kiss on the back of my head. My brain couldn’t process what was happening. I was embarrassed. I was shocked. I was confused.”

Carter posted a response to Flores detailing her own experience with Biden and it’s not what you think.

“Last night, I received a text from a friend letting me know that picture was once again all over Twitter in connection to Lucy Flores’ personal account of a 2014 encounter with Joe Biden. Let me state upfront that I don’t know her, but I absolutely support her right to speak her truth and she should be, like all women, believed. But her story is not mine. The Joe Biden in my picture is a close friend helping someone get through a big day, for which I will always be grateful. So, as the sole owner of my story, it is high time that I reclaim it — from strangers, Twitter, the pundits and the late-night hosts.”

“Upon our arrival at the Pentagon, I had slipped and fell on some ice — which a few journalists were nice enough to tweet about,” she writes. “Later, we went to the White House for the swearing in and I was feeling self-conscious and tentative (not a normal state for those who know me) about the fall — and perhaps about how much our life might change. As we walked in the room, reporters were staged and a young woman from Huffington Post shouted to me to ask if I was doing all right — I was somewhat thrown (did I not look all right?) but quickly remembered news of my fall on the ice had traveled.”

“By the time then-Vice President Biden had arrived, he could sense I was uncharacteristically nervous- and quickly gave me a hug. After the swearing in, as Ash was giving remarks, he leaned in to tell me ‘thank you for letting him do this’ and kept his hands on my shoulders as a means of offering his support. But a still shot taken from a video — misleadingly extracted from what was a longer moment between close friends — sent out in a snarky tweet — came to be the lasting image of that day.”

The real thought here is whether or not this actually what happened or if Carter is simply trying to preserve Biden’s image against the attacks he’s facing as a means of doing a favor for the Democratic Party that might see him as their only hope for defeating Trump in 2020.

Guess for now we’ll never know. However, the way he lingered over Carter is still creepy, don’t you think?