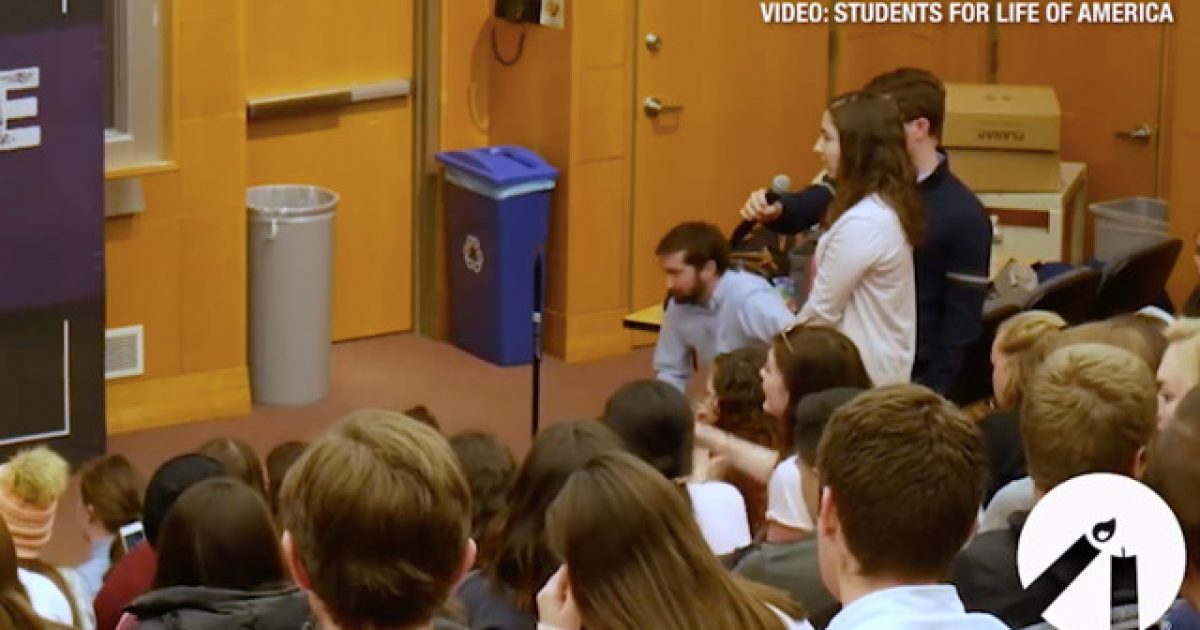 Boston College Pro-Life Club recently sponsored an event, where a female pro-abortion student stood up in front of a microphone and said something so horrific and abhorrent about the status of a baby born after a botched abortion that it will chill you to the bone.

According to this young lady, a child born during a botched abortion isn’t a baby, nor should they receive medical care.

Video of the exchange shows Students for Life of America President Kristan Hawkins asking the student if she believes that babies dying in immigration centers at the U.S.-Mexico border should be given medical treatment.

With that Hawkins asked a second question: “Do you believe that a baby who’s born alive during an abortion at Planned Parenthood should get care?”

“No,” the student replied.

Hawkins attempted to get a fuller explanation from the student, asking her if the U.S. should pay for the heath care of baby who’s dying in her mother’s arms when the mom crosses the border — and, again, the student said “yes.”

When Hawkins asked the student why a baby born alive during a botched abortion shouldn’t receive medical care, this is the answer the student gave:

“Because they’re performing an abortion,” the student responded. “So … they’ve already determined that it’s not a baby.” She also added a mostly inaudible phrase with the word “science” in it.

Here’s the video so you can see this clueless, brainwashed mass of cells for yourself:

Here’s what this dopey girl doesn’t seem to grasp. If a baby born alive during an abortion is not considered a human being, but a clump of cells, then it isn’t much of a stretch to claim that she too is just a clump of cells, therefore, her life has no value or meaning. This makes it easy to justify terminating her life if she offers no greater value to society at large.

In essence, the student just made a case for the legalization not only of child murder, but of murder in general. This is what happens when you lack the capabilities to think logically through your worldview to its ultimate conclusion.

It’s obvious this girl is just spouting talking points she’s read in a book or heard about from college professors. This is what our public education system is doing to young people. Turning them into nitwits incapable of thinking for themselves.

Ultimately, progressives love this line of thinking. Being able to justify murder makes life so much easier for them. Death panels for universal healthcare becomes less of an issue, as folks don’t mind murder since life has no value if it can’t contribute to the greater good.

This is a slippery slope, folks. God have mercy on our souls.