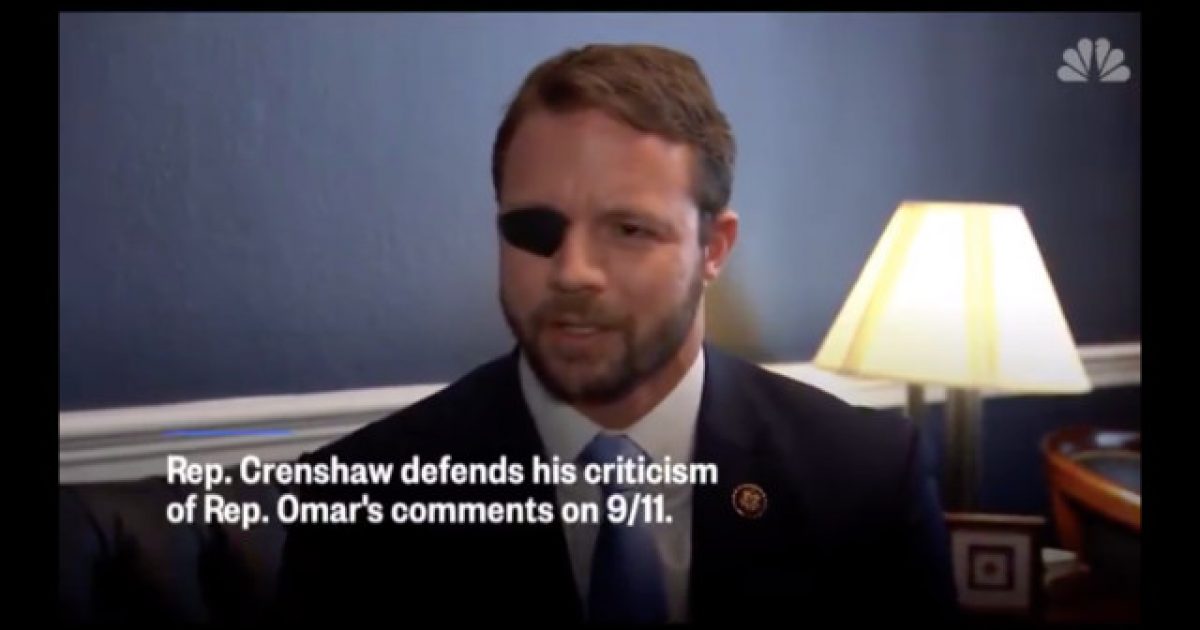 Rep. Dan Crenshaw, a true American hero who served his country with pride and dignity, losing an eye in the process, has come under heavy attack from leftists who have a real problem with him suggesting that Rep. Ilhan Omar downplayed the 9/11 terrorist attacks in a speech last week, saying “some people did something” in reference to that horrific day in American history.

Initially, the criticism aimed at Crenshaw was just…strange. Rep. Alexandria Ocasio-Cortez (D-NY), for example, accused Crenshaw of failing to address terrorism because he did not sign on as a co-sponsor to a bill making federal health benefits for 9/11 survivors permanent (Omar is a co-sponsor).

But not only was Crenshaw battling actual terrorists while Omar was plotting a run for Congress and deriding the existence of Israel on social media, but the bill doesn’t require supporters to become co-sponsors, and it’s not clear Crenshaw doesn’t support the common sense measure. The House has yet to vote on the bill.

Over the weekend, though, Crenshaw posted a video of himself defending his criticism and calling for deference to 9/11 victims in an interview with NBC. That’s when all Hell really broke loose.

This week was a new low in partisanship & dishonesty.

I watched in disbelief as some covered for Omar by coming after me with lies & absurd claims that I don’t support 9/11 victims.

What a disgusting, dishonest tactic.

Why turn this into a political football?

Here’s a response from a journalist Crenshaw received. This is pretty nasty stuff.

Freelance writer Rob Rousseau, apparently determined to elevate the conversation, decided to go after Crenshaw for his missing eye, tweeting, “You’re deliberately lying about what she said you eyeless f**k.”

Many of his critics resorted to typical leftist tactics like calling him a Nazi and accusing him of encouraging death threats against Omar.

Crenshaw never did anything of the sort. Omar has belittled 3,000 innocent American lives who were cut short by radical Islamic terrorists in one of the darkest days in our nation’s history.

Victims’ families are still hurting from all of the loss, even all these years later, and her comments on the attacks rip open those wounds afresh. Omar should be totally ashamed of herself and immediately issue an apology.

Granted, she won’t mean a word of it, but it would be the least she could do.

Crenshaw’s criticism gave Omar exactly what she deserved. The man was and is an American hero, the type of person we need more of in Congress.