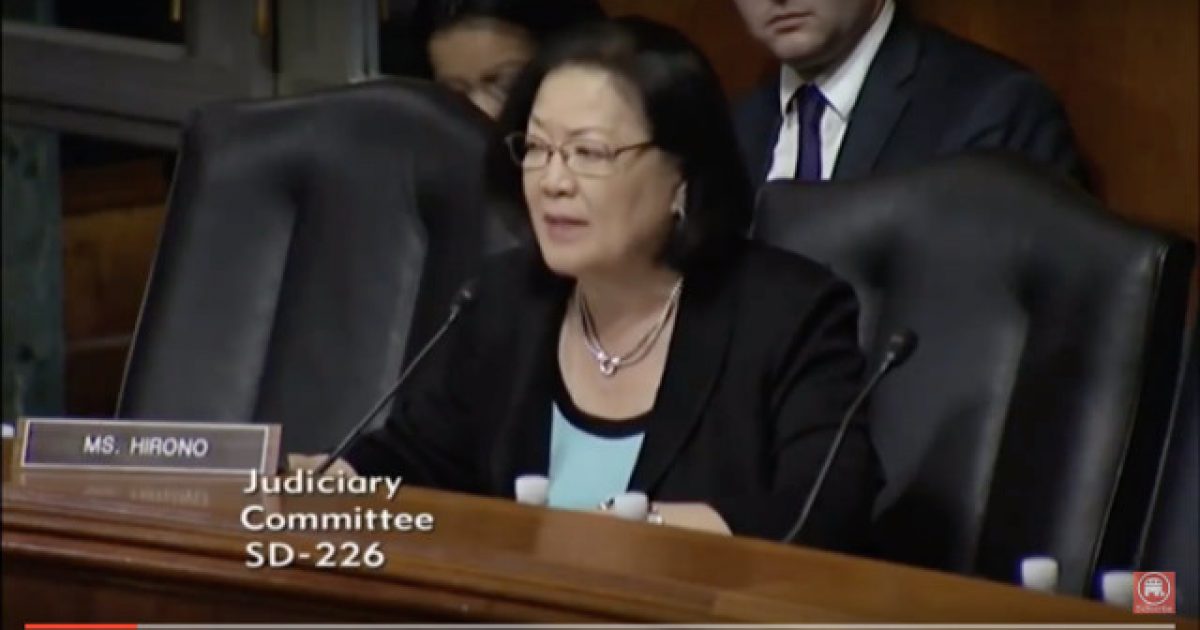 Democratic Sen. Mazie Hirono of Hawaii is a staunch defender of the “right” to murder unborn babies in all of Congress, having led the charge against the confirmation of Brett Kavanaugh to the Supreme Court, terrified that he might want to overturn the horrid Roe v. Wade decision.

Heaven forbid we not want to murder defenseless babies and strip away their God-given right to life. What kind of monster would want to do such a thing? Feel free to roll your eyes at this obvious bit of sarcasm.

Well, Hirono continued her assault against the unborn on Tuesday by condemning legislative efforts to protect the unborn from slaughter.

During a Senate Judiciary Committee hearing on the Pain-Capable Unborn Child Protection Act, Hirono suggested efforts be spent on children “here already,” rather than the millions who die from abortion each year.

“The word hypocritical doesn’t even begin to cover what is happening to women and children across our country,” Hirono said.

“I hope supporters of the bills that we’re talking about today, both in the states and in Congress, turn their efforts to improving the lives of the children who are very much here already and who are so poorly served by the Trump administration and its policies,” she added.

The piece of legislation in question, known as “Micah’s Law,” would make abortions after 20 weeks illegal on the scientific basis that unborn children are capable of experiencing pain by that time during a pregnancy.

The House actually passed the bill during the last three sessions of Congress, but has yet to be approved by the Senate.

So think about this for a second. This woman actually thinks it’s okay to kill unborn children during the period of gestation where they can physically feel the agony and pain of the procedure. How much more barbaric can you get?

The major problem with Hirono’s argument is that she’s trying to say that a person, a living, breathing human being only has value and worth once they are outside the womb. That’s simply not true. All life, no matter where on the time line it exists, deserves a chance to live and thrive.

Now, having said that, there is a legitimate criticism to be made for most pro-life folks and organizations not providing enough help and care for women who choose life instead of abortion. We can’t just let our ministry and mission stop at turning someone away from the clinic.

Many women out there will end up being single mothers who will need support, hope, and monetary assistance. There’s all kinds of ways pro-life people and organizations can help these ladies become self-sufficient, caring, loving moms.

Let’s hope we continue to grow in this area.