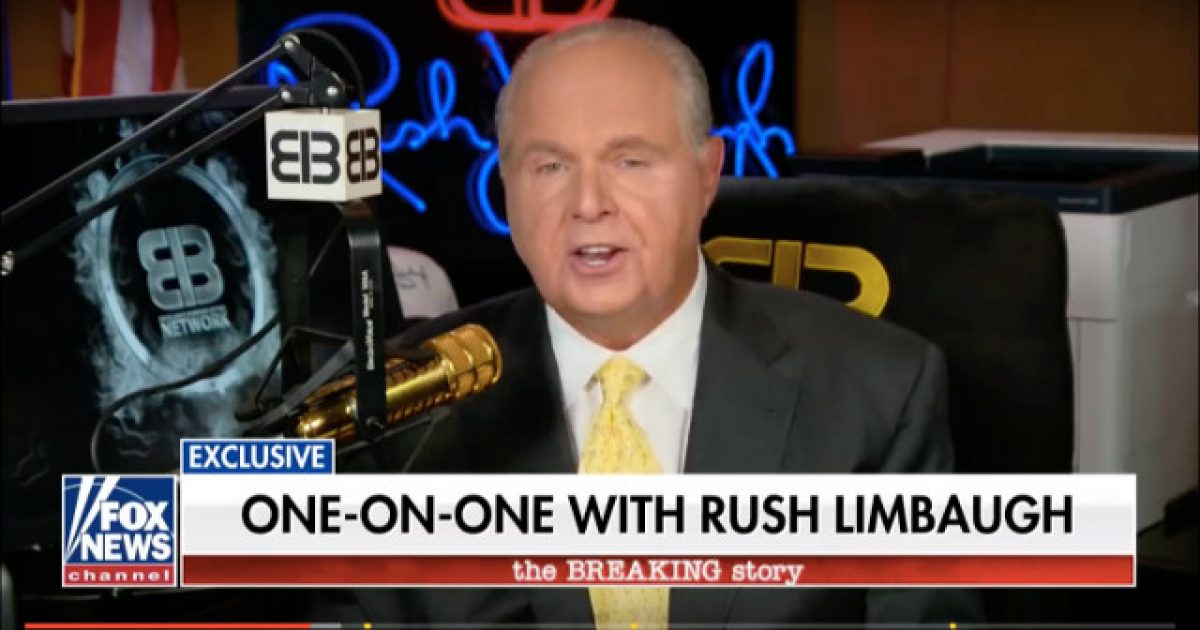 Legendary conservative talk radio host Rush Limbaugh made an appearance on “The Story with Martha McCallum,” on Fox News where he unleashed his full fury on Hillary Clinton, Joe Biden, and Elizabeth Warren, leaving them in a heap of ruin.

You got to love when Rush gets passionate.

The talk show host praised President Donald Trump and confidently asserted that not a single Democrat has a chance to take out the president in 2020. “Here’s the thing,” he said, “Joe Biden is probably the best chance they’ve got, and he doesn’t have a chance. They’re probably… I mean, Joe Biden and Crazy Bernie and Mayor Pete?”

“I mean, you’ve got three white guys, two of them are brontosauruses from Jurassic Park, and that isn’t gonna sit well with the rest of this party which has gone so far left,” Limbaugh continued. “You know, Biden’s putting off this announcement. I don’t know how badly he really wants this, and you have to really want this if you’re gonna have any chance of winning it.”

Limbaugh was asked if Trump is “vulnerable” to Democrats like Senator Warren, specifically for their promises of “free” things and loan forgiveness.

“‘Fauxcahontas’ is not gonna be the nominee. But, you know, these Democrats are all in the process of trying to out-leftist or out-liberal each other, and they’re in a contest of who can give away the most,” the radio host responded.

“But with Elizabeth Warren, forgiving college loans — forgiving that debt — and then promising free college and Medicare for all and a Green New Deal? Why is anybody gonna need to go to college?” he continued. “Because nobody’s gonna need a job, because the Democrats are gonna be giving everybody a universal basic income. So why does any of this matter? None of this is real. None of this can happen. This is disinformation.”

McCallum then played a clip of former Democratic presidential candidate Hillary Clinton saying Trump should be “indicted” for obstruction of justice over his “interference” in the Mueller investigation into Russian collusion.

Rush let her have it with both guns blazing.

“For Hillary — you talk about irony — for Hillary Clinton to be talking about impeaching Donald Trump, Hillary Clinton needs to be investigated, she needs to be indicted, and she needs to be in jail, and many of her co-conspirators in this whole sordid affair, which amounted to nothing more than a silent coup to overturn the election results of 2016,” Limbaugh responded. “Hillary Clinton demanding that Trump — you talk about sour grapes, this is a woman that’s been rejected by the American people twice, rejected by her party in 2008. She had to rig the primaries against Crazy Bernie in 2016 to get the nomination.”

“She hasn’t accomplished anything anywhere near what Donald Trump has accomplished. She is in no position to sit here and say what she saw in the Mueller — well, she can say it, she’s an American. But she doesn’t have any credibility on any of this as far as I am concerned. And I’m not alone there.”

Rush pretty much hit the nail on the head. The left doesn’t believe in offering their constituents the cream of the crop when it comes political candidates. Anyone who parrots the talking points will suffice for the Democratic Party.

This dedication to mediocrity is precisely why so many Democrats jumped ship in 2016 and decided to vote for Donald Trump. Folks are sick and tired of being offered second best and who can blame them?

The same kind of mentality has existed on the right side of the spectrum for a long time too. Seeing Trump get elected was designed to be a wake up call for the Republican Party. Stop giving us watered down candidates. We want the real deal. People who stand on their principles and will actually do what they say they’re going to do.

However, if the current 2020 Democratic presidential talent pool is any indication, it seems they didn’t learn their lesson after all.