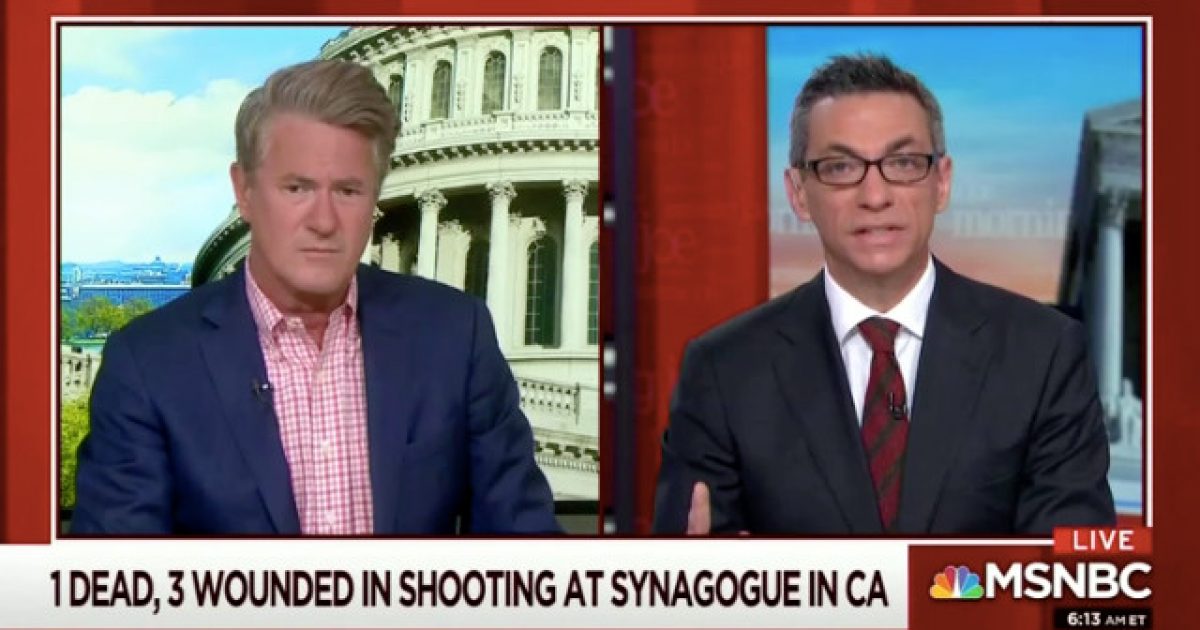 MSNBC’s “Morning Joe” co-host Joe Scarborough has joined with the vast majority of liberal left-wing media outlets across the country in attempting to somehow find a way to blame President Trump for the recent attack that went down in a California synagogue, comparing the commander-in-chief to radical Islamic terrorist groups ISIS and al-Qaeda.

Is there anything horrible that happens in this world that isn’t somehow the president’s fault? This is getting ridiculous.

“A spate of shootings during the Trump administration, inspired white nationalists, inspired by different events, but it all seems to come back to the same theme, and that is, again, hatred for Jews, hatred for blacks, hatred for others,” Scarborough said in a clip flagged by NewsBusters. “And you can go all the way back to Charlottesville.”

“And the Trump administration’s doing nothing about it. You look at the former coast guard member who had a kill list of media members, but also the Speaker of the House, Nancy Pelosi, Chuck Schumer, the Minority Leader of the Senate, Democratic presidential candidates,” Scarborough continued. “This was a guy that had a kill list, he had a manifesto, he was inspired by a Norwegian mass murderer, a white nationalist who killed over 70 people, slaughtered dozens and dozens of children at a day camp.”

MSNBC contributor Chris Watts then made the absurd comparison between Trump and Islamic terrorist organizations.

“If you took a lot of the statements by politicians right now in this country and you compare them to what Al Qaeda or ISIS clerics said that inspired attacks around the world over the last decade, they would look remarkably similar,” Watts said. “This is incitement to violence in many cases.”

You know who is responsible for this most recent shooting? The liberal news media. They are the ones who promoted stories about the Christchurch shooter and his hateful agenda which then inspired this young nutcase to carry out a similar attack.

Or, and this might sound strange, we stop blaming anyone and anything else other than the individual who carried out the crime? That sounds like a healthy dose of common sense, wouldn’t you agree?

The only person responsible for this vile wickedness is the individual who took it upon himself to procure a gun and use it to harm innocent people. Ultimately, this young man made a choice. Were other factors an influence on him? Sure. But those influences didn’t make him do it. He chose that himself.

When are we going to return to a time of personal responsibility? A time when each person is held accountable for the actions and choices they make on their own without immediately pointing the finger and passing the buck?

Trump is not to blame for the hate that is spreading through this country. The mainstream media, which has continually pushed a racially divisive and oftentimes anti-Semitic worldview and message, has helped plenty in that regard.

If these folks want to see a big change made, perhaps they ought to lead the way?