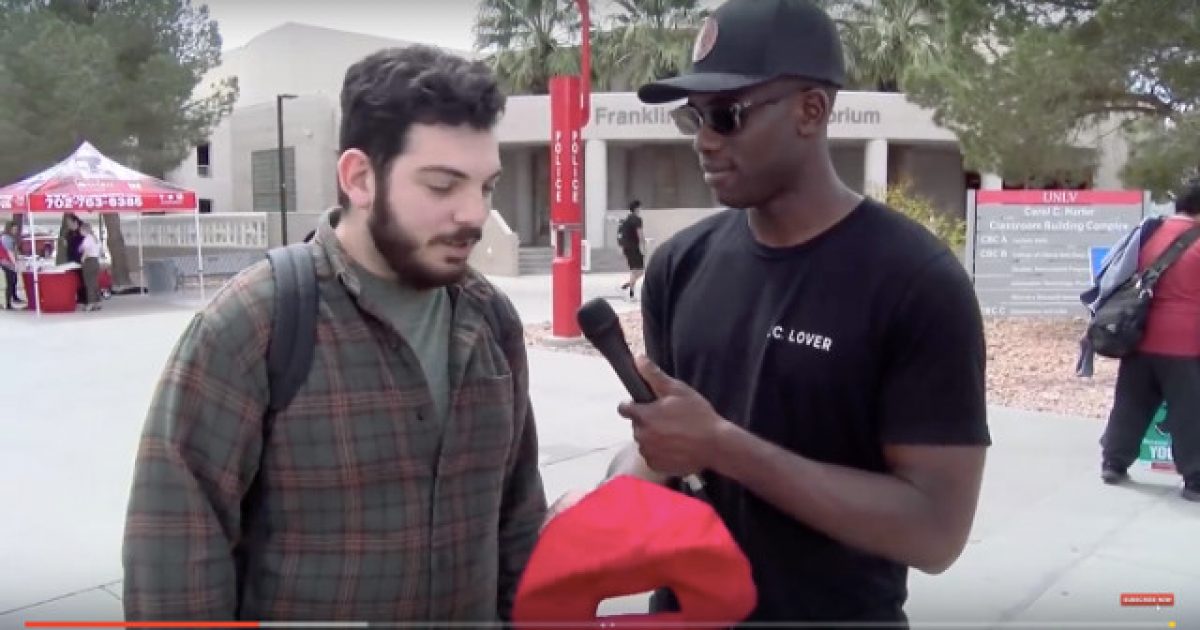 Unless you’ve had your head shoved somewhere rather dark, moist, and uncomfortable, you’ve probably seen numerous stories over the last couple of years about folks wearing “Make America Great Again” hats being called racists and being assaulted by raging social justice warriors.

This has prompted many folks to consider whether or not MAGA hats are the new KKK hoods, a question that was recently posed to students at the University of Nevada, Las Vegas.

And it seems the overwhelming majority tend to think that’s exactly the case.

In a series of man-on-the-street interviews by Cabot Phillips of Campus Reform and YouTuber Mike Ayetiwa, students at UNLV were asked if the red “Make America Great Again” hat is a hateful symbol that strikes the same fear in the hearts of people as the KKK hood would. Take a look:

The video begins with Ayetiwa and Phillips showing several students photos of the KKK hood, asking them to describe the type of feelings it stirs within them. The answers: fear, repulsion, anger, racism, hate, etc. Later, when the hosts present a red MAGA hat and ask the students if it bears any relationship with the KKK hood, the answers are somewhat surprising.

“When you see that, what comes to mind?” Phillips asks an African American female student.

“The same thing,” she anxiously replies. “I’m not gonna lie … In some ways. Maybe in their morality basis.”

When Ayetiwa shows the red MAGA hat to a trio of black female students, they immediately declare it “the modern-day hoodie.”

How ridiculous is this, folks?

You know, one of the things “woke” young people are supposed to hate is when you stereotype people and lump all folks under one umbrella. Which is precisely what they’re doing when they compare the MAGA hat to the KKK hood.

Almost everyone who wears the MAGA hat is simply stating they’ve had enough of politics as usual and want to see America become a priority for those voted into office. They’re saying they want to see strong border security to keep violent criminals and offenders from crossing the border and to prevent putting massive strain on the already strained welfare system.

They’re not anti-people of color. They’re not anti-immigrant. Quite the opposite. Conservative supporters of Trump want to see folks from all over the world, regardless of color, come to this country through the proper channels and take advantage of the opportunities available that can give them better lives and contribute to the betterment of our society.

This whole “MAGA hats are racist” nonsense is a result of indoctrination with no basis in fact or truth. Even if there are some folks who rock the hat that are racist, they’re a minority and don’t represent the movement as a whole. These folks have been widely denounced.

Lord help us when these same young folk grow up and take over this country.