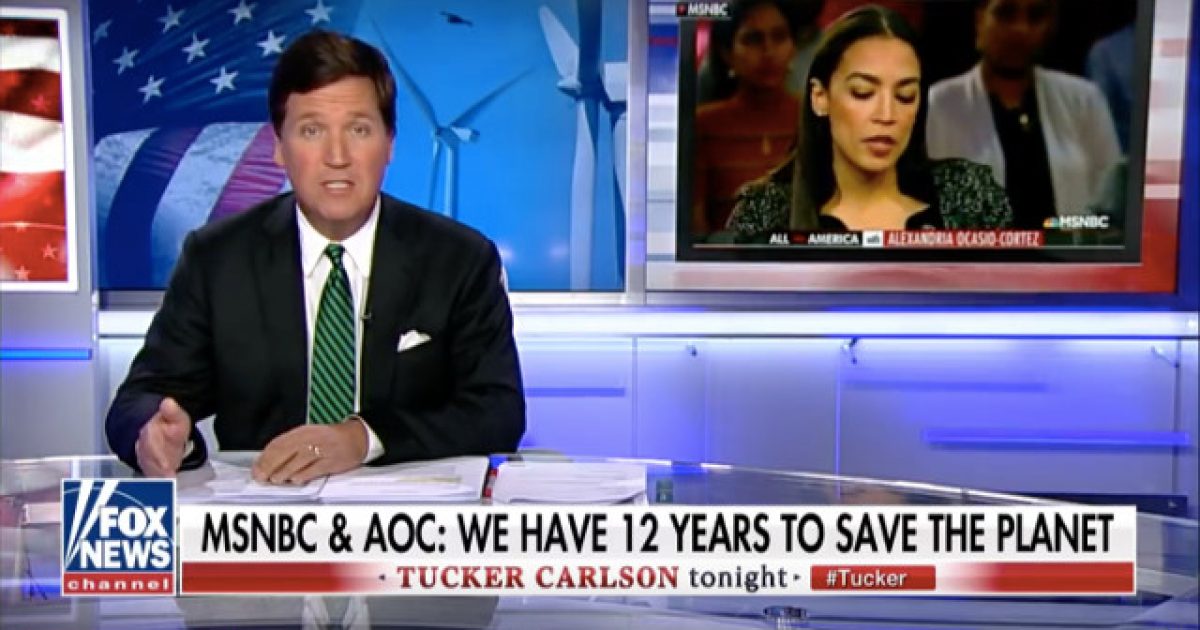 Fox News host Tucker Carlson has apparently had all he can take of Democratic socialist Rep. Alexandria Ocasio-Cortez, as he totally unleashed all hell on her during his program Monday evening after she participated in an MSNBC town hall.

The whole event was seemingly orchestrated as a means of helping to improve her extremely bad poll numbers and to promote her insane radical leftist ideology.

Not only did Carlson level AOC, but he also fired a few rounds at town hall host Chris Hayes, saying that Hayes “is what every man would be if feminists ever achieved absolute power in this country: apologetic, bespectacled, and deeply, deeply concerned about global warming and the patriarchal systems that cause it.”

Carlson went on to say, “[The town hall] apparently seemed like a wise idea to executives at MSNBC. The very same news outlet that spent two years lying to you about Russia brings you a 29-year-old former bartender to teach you about science.”

Then came his epic destruction of Ocasio-Cortez.

“Listen to her explain how she doesn’t resort to ad hominem attacks unlike her enemies who, by the way, are xenophobic white supremacists,” Carlson said before playing the clip from the town hall. “So it’s official, Alexandria Ocasio-Cortez is a moron, and nasty, and more self-righteous than any televangelist who ever preached a sermon on cable access. She’s not impressive, she’s awful.”

Tucker Carlson slams Ocasio-Cortez: "So it's official, Alexandria Ocasio-Cortez is a moron, and nasty, and more self-righteous than any televangelist who ever preached a sermon on cable access. She's not impressive, she's awful."pic.twitter.com/iIfwu0ylRa

Here’s the full video of the segment:

The obvious fact that AOC’s a few french fries short of a full happy meal is definitely not a new conclusion, but to see so many folks in the media like Tucker become so visibly frustrated with her inability to tell the truth is quite telling.

AOC isn’t just another wacky liberal. She’s more than that. She’s the representative of an entire generation of folks who have recently graduated college, having been indoctrinated with leftist ideology from the cradle, who are now starting to realize their belief system doesn’t actually work.

Rather than recant and go searching for the truth, many of them twist the facts in order to assure themselves that what they believe is right, even as the walls of the castle crumble around them.

AOC’s comments about the whole 12 year deadline have been proven false by numerous scientists, such as Kate Marvel who works for NASA:

“12 years isn’t a deadline, and climate change isn’t a cliff we fall off — it’s a slope we slide down,” Marvel said. “We don’t have 12 years to prevent climate change — we have no time. It’s already here. And even under a business-as-usual scenario, the world isn’t going to end in exactly twelve years.”

Yet she still continues to push this narrative. Why? Because she honestly doesn’t understand how to compute actual facts and weigh them against what she actually believes. She’s too scared to. It means that she deep down knows none of this works.

The fact that she likely knows the system she’s clinging to and espousing is bogus yet continues to push it anyway is testament to the truth behind the stinging comments made by Carlson.