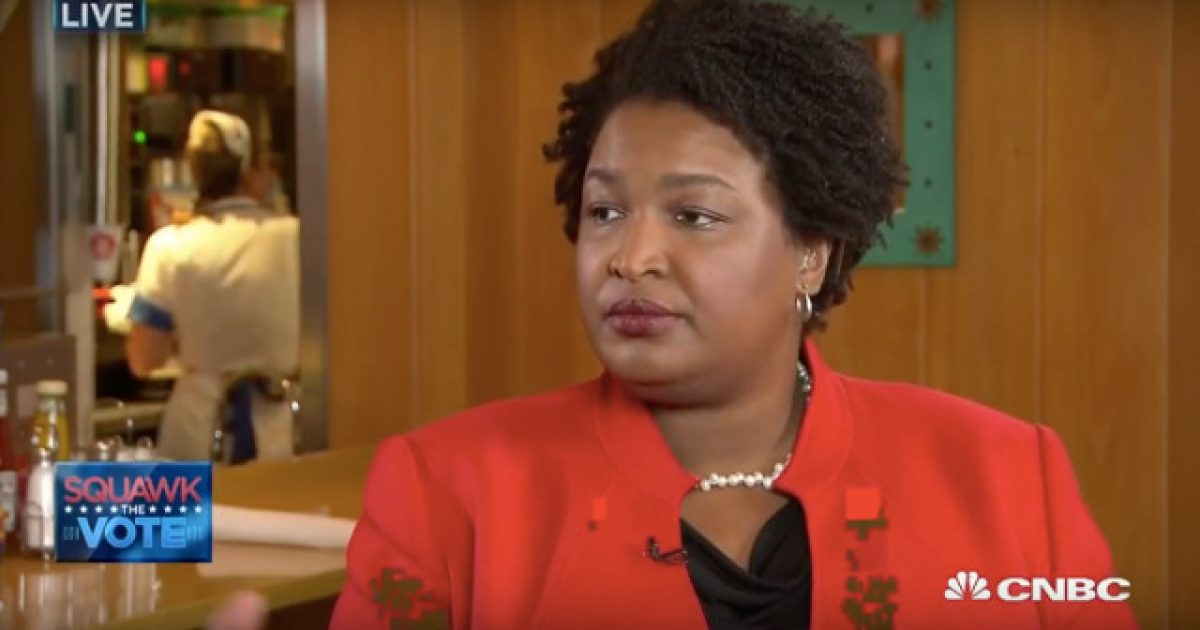 According to her it was “distressing” and “disturbing” that people wouldn’t accept the outcome of that election.

My, my, my. How things have changed, huh?

A video sent to The Daily Wire shows Abrams denouncing the idea of not accepting the results of an election in an interview with CNBC’s Andrew Sorkin in October 2016.

“You’re in a state that if it does go to Trump, we may still have a national election in which Hillary Clinton were to win,” Sorkin said. “One of the articles in USA Today this morning, suggest that 4 out of 10 Trump supporters would not recognize such a win if that were the case.”

“What does that mean for a state like this?” Sorkin asked.

“I think what it signals is a shifting of our politics that we’re going to have to work together to shift back,” Abrams replied. “The rancor that pervaded this campaign is disturbing and it is distressing, but it is also a fixable problem. The enthusiasm for Sarah Palin had a similar bent but we eventually found our way back to being good citizens and I think we’ll do the same.”

The video resurfaced just after Abrams claimed on Wednesday that she won the race for governor in the state of Georgia last year against GOP candidate and current Gov. Brian Kemp, despite the fact Kemp clearly beat her by 54,723 votes in a fair election.

Here’s a small portion of what she said:

“On November 6, I said from the podium that we were going to not declare anything until every vote is counted, and on November 16, I decided to acknowledge the states of the election but I refused to concede,” Abrams continued. “Because here’s the thing concession means to say something is right and true and proper.”

Here's the video of Stacey Abrams stating she won the 2018 governor's race in GA.

This woman seems to be a few bricks short of a full load. Like the elevator doesn’t go all the way up to the top floor. The lights are on, but nobody’s home.

You get the picture.

The bottom line is, Abrams lost the election fair and square. She needs to accept this and concede because contrary to what her entitlement attitude is telling her, the results were fair and right. The state weighed in on whether or not it wanted her to be its governor. The answer was no.

Time for her to move on from it. Which she sort of is in one way, since she’s planning a run at the White House.