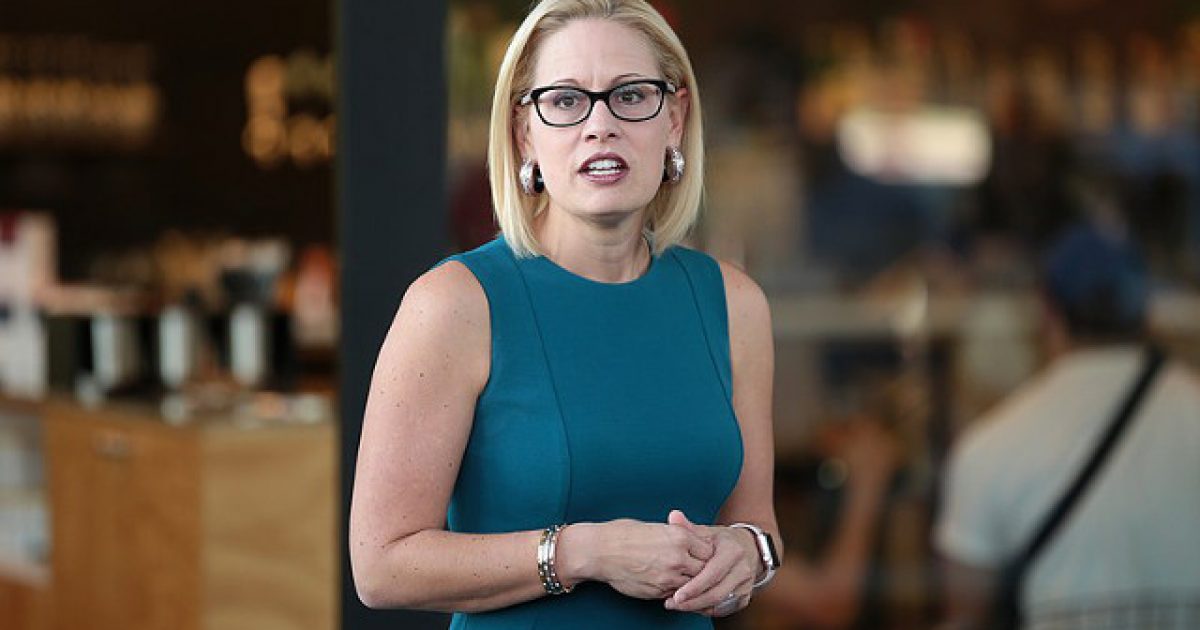 Typically when you think of Democrats in Congress weighing in on immigration, thoughts of open borders and massive entitlement programs being spent to feed, house, and care for millions of individuals who aren’t even citizens or contributors to the country comes to mind.

However, it seems that not every member of the Senate is completely nutty on this hot button topic. Arizona Democratic Sen. Kyrsten Sinema recently called for the Department of Homeland Security to send down reinforcements to her state, right after a group of Democrats requested that the funding for the agency be slashed in the midst of the crisis down at the border.

Shocking, isn’t it? Anyone need a defibrillator to get their heart running again?

Arizonans bear the brunt of Washington’s failure to address our broken immigration system. We must secure the border with a comprehensive, smart, bipartisan approach – we’re calling on @DHSgov to send additional resources and staff to AZ ports. pic.twitter.com/qZGq3LgLmF

The freshman senator’s language is starkly different from that of a group of her colleagues — including every Democratic presidential candidate in the upper chamber — who sent a letter to the Senate Appropriations Committee on Monday asking for funding cuts to the already overwhelmed agency.

As your Committee considers fiscal year 2020 Department of Homeland Security (DHS) appropriations, we ask that you reduce funding for the administration’s reckless immigration enforcement and detention operations that are tearing families apart and harming the American economy. We also ask that you include language limiting the DHS Secretary’s ability to transfer funds for the purpose of detaining immigrants. Furthermore, we urge you to reject President Trump’s FY20 request for a significant increase in Immigration and Customs Enforcement (ICE) personnel and detention beds, as well as his request to fund construction of his costly and ineffective border wall.

None of the folks who signed the letter, minus California Sens. Dianne Feinstein and Kamala Harris, actually come from border states where this nightmare situation is unfolding on a daily basis. They don’t see the hardship bringing these folks into the country is causing, especially for smaller border towns who don’t have the available resources to adequately care and provide for individuals crossing over.

Of course, that’s not a major concern for the vast majority of liberals in our government. All they care about is creating new lifetime Democrat voters, which is precisely what they will get once these new immigrants are hooked on entitlement programs.

This isn’t the first stand that Sinema has taken that doesn’t tow the party line. When the Green New Deal was brought up for a vote, the vast majority of her colleagues simply voted “present.” Sinema voted no.

So while it’s absolutely uncommon, it seems there really is such a thing as a left-of-center Democrat still in existence. This is someone many on the right should be attempting to reach across the aisle to work with on issues where compromise can be had.

Let’s hope we see more of this spread through the Democratic Party.

CNN’s ‘Cult Expert’: All of America Needs Deprogramming Because of Trump
January 19th, 2021 The Mental Recession

Leading The People To Empty Promises: ‘Q-Anon’ Just Another Psyop To Keep You Distracted
January 19th, 2021 Sons of Liberty Media