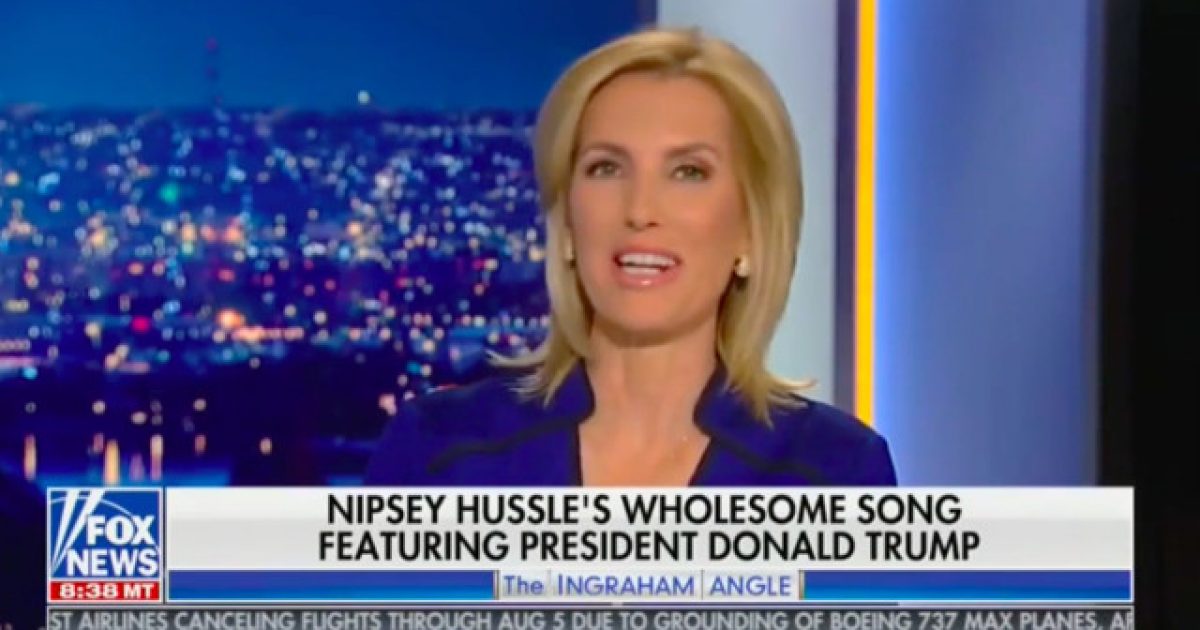 Everyone’s favorite gangsta rapper, Snoop Dogg, along with a handful of other black entertainers have their panties in a bunch over a comment Fox News host Laura Ingraham made about the funeral of Nipsey Hussle, a community leader and rapper from Los Angeles.

In fact, they’re so ticked off at her, they’re demanding she be booted off the network. Seems like the Laura Ingraham fan club just keeps getting bigger and bigger, doesn’t it?

Ingraham pointed out that Hussle recorded an expletive-ridden protest song against President Donald Trump, and went on to ridicule at the lyrics of the song.

Hussle, whose real name is Ermias Joseph Asghedom, was shot and killed outside of his store in South Los Angeles in March. His massive funeral was attended by many celebrities and leaders of the African-American community in celebration of his artistic contributions and political activism.

Rapper “The Game” called Ingraham a “disrespectful c***” and called on his 10.3 million followers on Instagram to demand she be fired by putting pressure on her advertisers.

“I’m asking all of my followers, fans, friends & family to spread this video with demands of #LauraIngrahams termination immediately !!!!!” he commented.

Snoop responded with a simple, “I’m in.”

Rapper T.I. wanted in on the action so he posted a response to Ingraham on his Instagram account.

“This is Disgusting! You both are vile despicable, poor excuses for people,” he commented. “Neither of you WILL EVER know or experience the level of love, appreciation and respect that Nip has… EVEN IN DEATH!!! So let that sizzle in ya lil hateful,demonic spirits.”

For those who want to see what all the latest outrage is about, here’s a video that features a snippet of Ingraham’s comments about Hussle.

In case you missed it, the basic gist of this whole situation is that rappers are mad that a fellow artist who recently passed away had his anti-Trump lyrics, which are part of a song released to the public, critiqued on a conservative news program.

Sorry, but if you don’t want your music critiqued, even after death, then perhaps you shouldn’t be a professional musician. If the roles were reversed you know good and well these rappers wouldn’t care at all about insulting a white musician.

This is just another example of how easy it is to hurt the feelings of radical leftists. Nothing disrespectful was said about Hussle himself. It was all about the lyrics.

Given the fact they aren’t Fox News’ target demographic, there’s probably not much of a chance Ingraham is going anywhere.