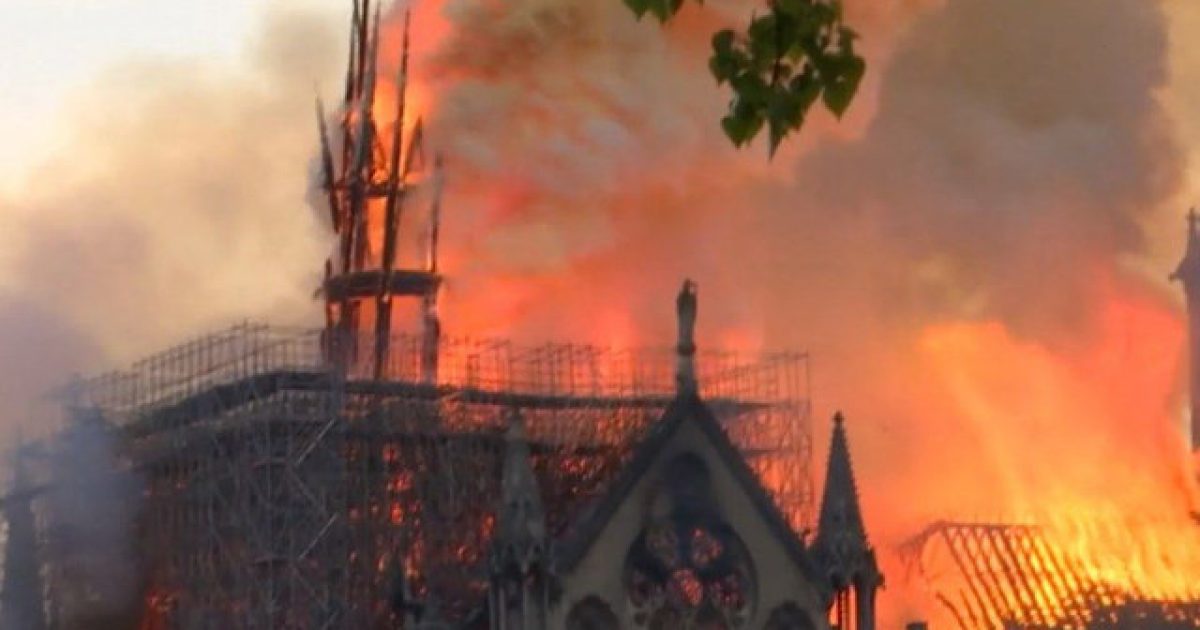 Folks all over the globe are still mourning the terrible tragedy of the Notre Dame cathedral, which was largely destroyed by a monstrous fire on Monday of this week.

While many tears have been shed over the destruction of a magnificent piece of architectural artwork and an important part of our world’s history, others have been less disturbed by the ordeal.

Take the architect quoted by Rolling Stone magazine for example.

This particularly unsavory individual had the gall to say the fire was an “act of liberation.” Perhaps the only thing more classless than this stupid hot take is the fact Rolling Stone bothered to print it and promote it.

“How should France rebuild Notre Dame?” the Rolling Stone’s E.J. Dickson asks in the title of an op-ed published Tuesday. Rather than give the obvious answer – exactly as it was – Dickson goes on to flirt with the idea of Notre Dame becoming something else, forever ridding it of the meaning that so many people ascribe to it, which the article suggests is some kind of pathological clinging to a past-that-never-was.

“The damage wrought by the Notre Dame fire has also raised important questions about the cathedral’s symbolic significance in an increasingly divided France, and how to rebuild (or which version of the cathedral should be rebuilt) going forward — and in some ways, these questions are one and the same,” writes Dickson.

While the author notes the vast, incalculable historical significance that Notre Dame holds, Dickson also highlights the modernists who feel “resentment” toward the cathedral, wondering if the rebuilding will meet their cultural needs as well.

“For some people in France, Notre Dame has also served as a deep-seated symbol of resentment, a monument to a deeply flawed institution and an idealized Christian European France that arguably never existed in the first place,” writes Dickson. “If nothing else, the cathedral has been viewed by some as a stodgy reminder of ‘the old city — the embodiment of the Paris of stone and faith — just as the Eiffel Tower exemplifies the Paris of modernity, joie de vivre and change,’ Michael Kimmelmann wrote for the New York Times.”

To underscore this, Dickson includes a quote from Harvard University architecture historian Patricio del Real, who said the cathedral had become “overburned with meeting” and referred to the scourge of fire as an “act of liberation.”

“The building was so overburdened with meaning that its burning feels like an act of liberation,” said Patricio del Real.

Printing this garbage online wasn’t enough for RS. No, they had to take this abomination of a quote and plaster it all over their Twitter feed too. As you might imagine, this did not go over well with folks online.

"The building was so overburdened with meaning that its burning feels like an act of liberation." We talked to architects and historians about the significance of Notre Dame — and what should happen next https://t.co/0tulGIjwMA pic.twitter.com/pNll70pJfF

So the author of the Rolling Stone piece wants to see a cathedral, which is a church, be rebuilt into something else entirely devoid of any sort of Christianity, because, you know, that particular religion is the scourge of the world or some nonsense?

This was a church. It’s sole purpose for existing was to worship and honor the Creator of the universe and His Son Jesus Christ for coming to die on a cross to rescue mankind from the wrath of God. Yes, this same Creator has rules for how we, His creation, are to live. Yes, those rules include the forbidding of homosexuality and many other sinful debaucheries our modern society loves.

No, that’s not bigotry. God is holy, just, and perfect. He as the Creator dictates the rules of reality and the rules for morality we are commanded to follow. That being said, mankind has no right to rail against God’s laws. If you do, and you don’t repent, you are in for a rude awakening when it all goes dark.

Notre Dame cathedral should be rebuilt back the way it was. End of the story.