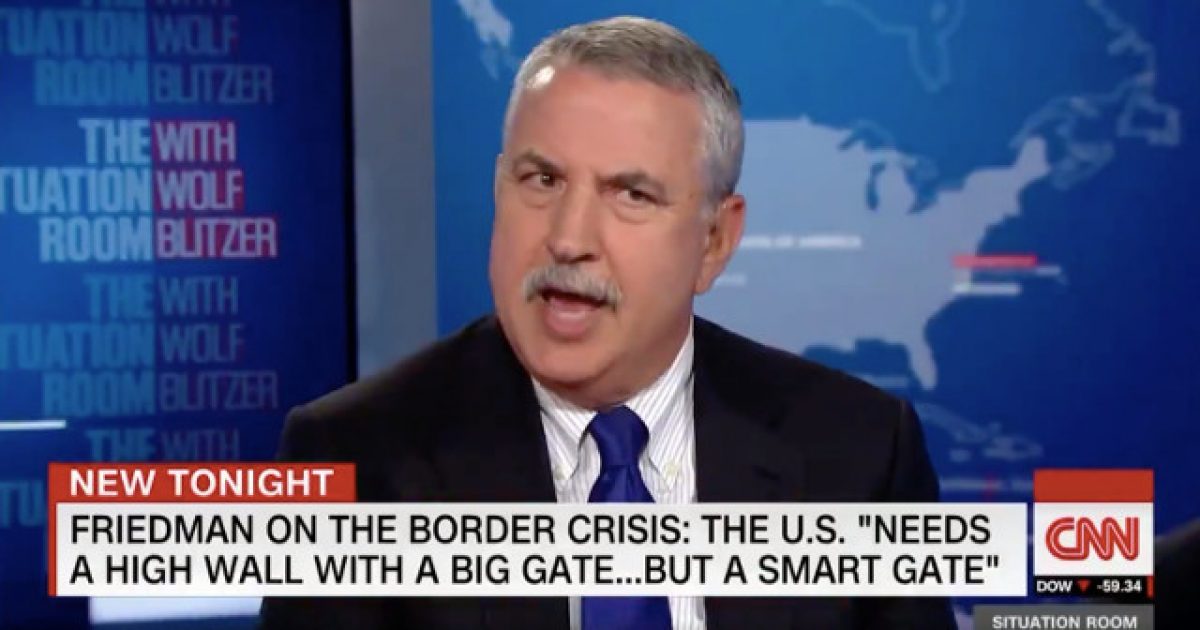 Thomas Friedman, columnist for the New York Times, recently paid a visit to the U.S. – Mexico border, and along with stating there’s a border crisis going on down there, actually said the solution to stop this problem is a “high wall.”

If you remain silent and perfectly still, there’s a high chance you can probably hear the sound of left-wing nutjobs all across the country crying out in rage and agony all at once.

“The whole day left me more certain than ever that we have a real immigration crisis and that the solution is a high wall with a big gate — but a smart gate,” Friedman wrote.

Friedman echoed those sentiments while appearing on CNN Wednesday night when pressed by Wolf Blitzer.

“Wolf, I’m as radically pro-immigration as they come,” Friedman said. “But it’s pretty clear to me that unless we can assure a significant number of Americans that we can control our border, we’re never going to have the proper immigration flow I think we need, we desire, and that we have actually a moral responsibility — given our history as a nation of immigrants, and a refuge for people fleeing persecution.”

“We have a president who actually, when you think about it, Wolf, he has the chops with his base,” Friedman continued. “If he were to sit down, call Nancy Pelosi up, say, ‘We’re going up to Camp David. You bring your immigration team, I’ll bring mine. I’ll leave Stephen Miller at home, and we will actually sort out a compromise here.’ … Democrats were ready to fund more border security, but at the same time we’re going to create a legal pathway for people here, limits the number of ICE arrests and we’re going to have a rational inflow of people.”

"I'm as radically pro-immigration as they come," says NYT columnist Thomas Friedman. "But it is pretty clear to me that unless we can assure a significant number of Americans that we can control our border, we're never going to have the proper immigration flow I think we need." pic.twitter.com/Dk5jCgxMaS

It’s so darn shocking to see a reporter who works for the New York Times actually validate something the president wants to do that it almost leaves one speechless. Almost.

Conservatives have been saying there’s a crisis at the border for a long time, as have the people who live in the cities and towns along the border. The left conveniently leaves out these stories and accounts because acknowledging this fact doesn’t fit in with the agenda they’re trying to push.

After all, hardcore Democratic politicians want as many illegals as possible to cross over the border and help inflate their party voter rolls.

At the same time, it’s not a stretch to say that our current immigration system definitely needs some work. It’s not that the current laws need to be tossed out and an entirely new system put in its place. Things just need to be re-examined and tweaked. That’s all.

Regardless, one has to wonder what other leftist journalists are going to say about Friedman’s comments. It’s sure to be brutal.