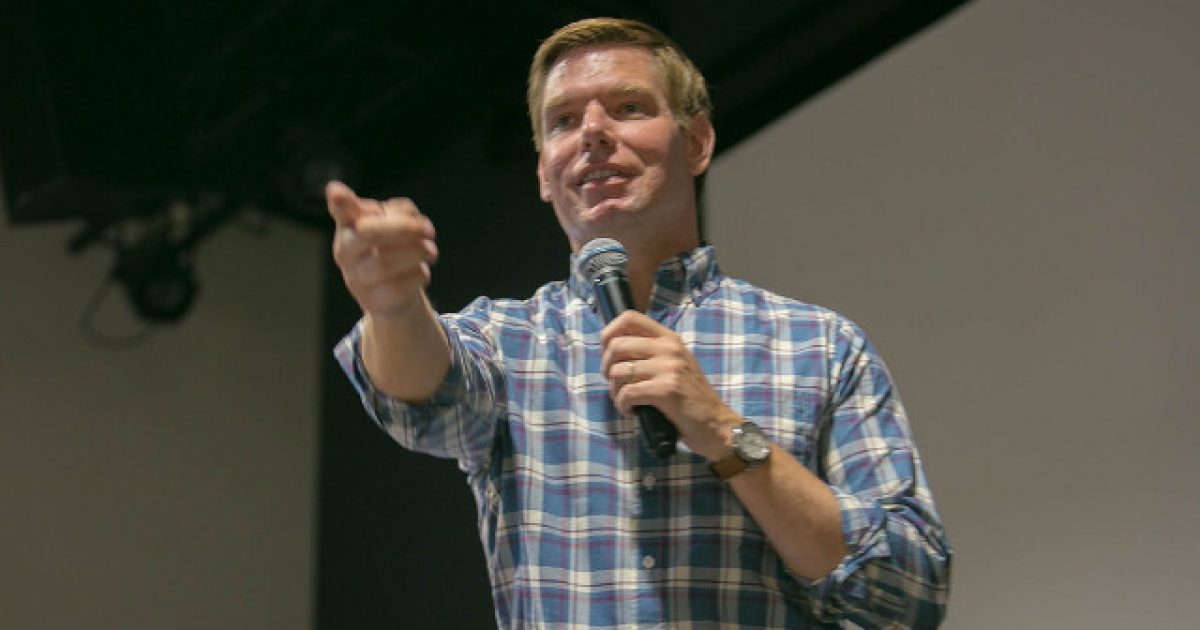 An already crowded 2020 presidential candidate pool for the Democratic Party is about to have yet another swimmer making a splash in the race, and the individual who might be dipping his toe in the water is not going to go over well with Second Amendment supporters.

California Congressman Eric Swalwell, a very verbally outspoken enemy of President Trump and a huge supporter of gun control, is reportedly tossing his hat in the ring for the 2020 election next week.

According to The Atlantic, Swalwell wants to center his campaign around gun control, and will announce his run for the presidency next week on “The Late Show With Stephen Colbert.”

Looking to buttress any support he can get from younger voters, whom he has stated catalyzed his harsh stance on assault weapons, Swalwell has apparently enlisted Cameron Kasky, one of the survivors of the Marjory Stoneman Douglas High School massacre in February 2018, to aid his efforts. According to The Atlantic, “Together, they’re organizing a town hall that Swalwell will host in Coral Springs, Florida, on Tuesday.”

The Atlantic’s Edward-Issac Dovere writes, “When I reached out to Swalwell on Wednesday evening, he wouldn’t confirm the news, but he didn’t leave much doubt that he intends to run for president. ‘We are doing a town hall in Parkland,’ he told me. ‘And I do believe that gun safety has to be a top 2020 issue.’”

Ever heard of Shannon Watts? She’s the founder of Moms Demand Action for Gun Sense in America and also happens to be pretty tight with Swalwell. Here’s what she had to say about it:

“It’s a true sea change in presidential politics that the candidates are competing to be the strongest on this issue, which means Americans will have a plethora of gun-sense champions to choose from. The calculus on guns has changed, and gun safety is no longer a third rail—in fact, making this issue a priority in your policy platform is how you win. Representative Swalwell has a long track record of being good on the issue of gun safety, and we welcome him to the race.”

To give you a clue as to what kind of left-wing nuttiness we’d be dealing with if Swalwell entered the race, this is the same guy who just last November suggested using nuclear weapons against any American citizens who refused to comply with his anti-gun agenda.

Swalwell supports creating a $15 billion government program that would violate the Second Amendment by confiscating millions of guns from American citizens. Yeah, that’s not going to work.

And it would be a short war my friend. The government has nukes. Too many of them. But they’re legit. I’m sure if we talked we could find common ground to protect our families and communities.

As if this country needs any more left-wing lunatics with mental health issues with insane ideas and itchy button pushing fingers.

The Second Amendment exists because our founders recognized just how fragile a thing freedom truly is, knowing it would only be a matter of time before our government grew too large, despite the chains of the Constitution, and would try to oppress the people and take away their liberty.

The Bill of Rights, and the Second Amendment in particular, enables citizens to own the means necessary to defend the liberty that so many have shed their blood for, a fact Swalwell, who is one of the tyrants the founding fathers had in mind, just doesn’t seem to grasp.

This is because like every liberal, Swalwell is led by emotions, not by logic or well thought out arguments or facts.

Let’s hope this guy decides to go ahead and sit this one out.