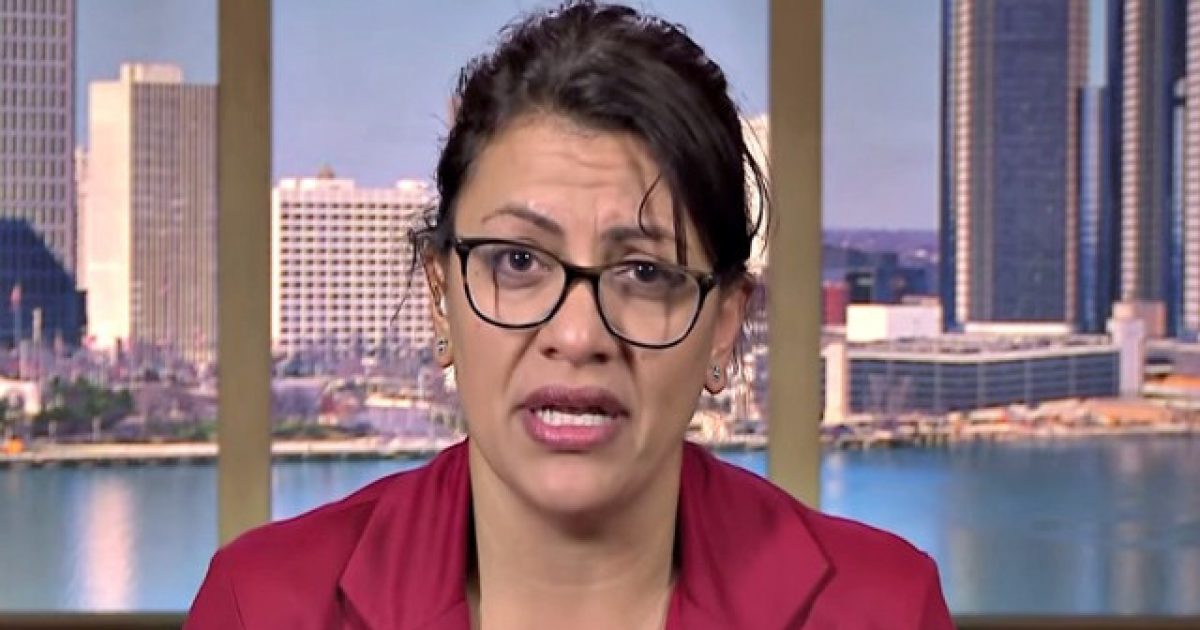 A new report has come out that claims radical Democrat Rep. Rashida Tlaib, good friends with Rep. Ilhan Omar and just as anti-Semitic, met with a terrorist supporter and an extreme anti-Israel activist in her congressional office located in Washington earlier this month.

This is the kind of people the Democratic Party is backing these days, folks. Whether the report ends up being true or not, the fact of the matter is Tlaib has made anti-Semitic statements in the past and needs to step down from her office.

The Daily Caller’s Molly Prince reported that the meeting happened during the American Muslims for Palestine (AMP) Advocacy Day, which reportedly requires those attending to support the anti-Semitic “Boycott, Divestment and Sanctions (BDS) movement, which seeks to punish Israel by economically depriving the country for its alleged mistreatment of Palestinians living in the Gaza Strip and West Bank.”

“Tlaib spoke to AMP on April 8 where she told the group that she feels ‘more Palestinian’ when she is in Congress than she does elsewhere, according to The Investigative Project On Terrorism, who first reported on the meeting,” Prince reported. “AMP’s New Jersey chapter posted a photograph of Tlaib outside of her office with some of its members during the event, including Joe Catron, an avowed supporter of multiple Palestinian terrorist organizations.”

Prince reported that Catron praised Tlaib on Facebook following the event, saying that Tlaib “really goes above and beyond the call of duty in welcoming every supporter of Palestine to her office, listening to what we have to say, answering our questions, and posing for endless pictures.”

Prince reported on extremist content posted to social media by Catron, adding: “Catron is a long-time extreme anti-Israel activist and has openly supported terrorist organizations. He serves as the U.S. coordinator of Samidoun, the Palestinian Prisoner Solidarity Network. Samidoun is an affiliate arm of the Popular Front for the Liberation of Palestine (PFLP), a Palestinian Marxist–Leninist and revolutionary socialist organization. The United States designated PFLP a terrorist organization in 1997, and Australia, Japan, Canada and the European Union shortly followed suit.”

So the left slams practically every single conservative who comes out with a hardline stance on immigration, tossing out the old “racist” card any chance they are given, yet they’re harboring individuals who sit in Congress that spew hate against Jewish folk and meet with terrorist supporters?

Isn’t that a bit of hypocrisy? Surely a group of individuals who have based a good chunk of their platform on equality and erasing racial hatred wouldn’t dare protect and defend the actions of one of their own when they cross this particular line, right?

Yet that’s precisely what’s happening and it’s maddening. The left needs to apply their principles consistently if they want to be taken seriously. Why should we listen to people who only talk but don’t put their own worldview into practice?

Time for the Democratic Party to hold Tlaib accountable for her actions and poor choice of words.