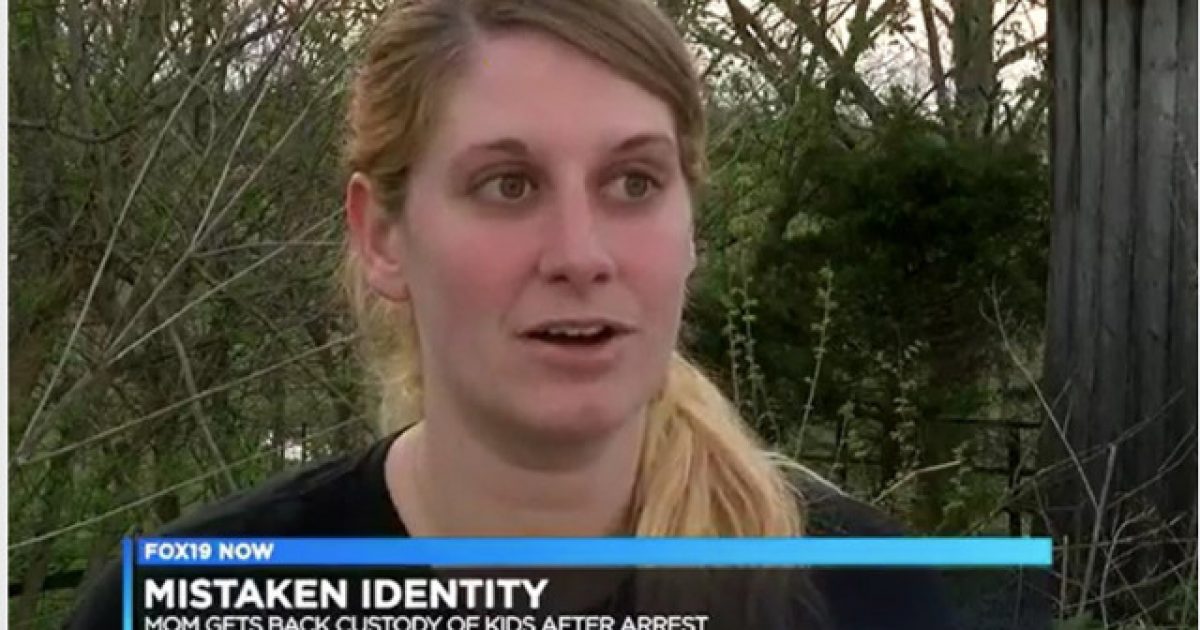 Police in Ohio recently wrongly arrested and jailed an Ohio mother earlier this month, acting on a warrant that was intended to nab a suspect for drug-trafficking who shared the same name.

As a result of the mistaken identity the woman spent a whole week in jail, got canned from her job, and temporarily lost custody of her children.

This is a truly harrowing tale.

Authorities arrested Ashley Foster, 26, in a Target parking lot April 11, after a Hamilton County Sheriff’s deputy ran her plates as part of a routine patrol.

“I told him my name was Ashley, he asked me to step out of the car,” the mother later recalled to WXIX-TV. “They said, ‘Do you know you have a warrant out for your arrest?’ And I said, ‘No! What did I do?’ He said it was for tracking heroin, and I broke down in the parking lot, on the ground crying.”

However, the deputy was relying on information from Brown County, where the Aberdeen Police Department had issued the warrant intended for a suspect named Ashley Foster on April 1. Problem was, nearly all of the identifying documentation in the system matched the wrong woman.

“They showed me the computer, everything they had in front of them, it was my ID, my picture, my birthday, my social security number, but it was not my address,” Foster confirmed. “I said that I didn’t do anything and that they had the wrong person.”

Foster was cuffed and her two children — both boys — were in the vehicle and taken into custody by Child Protective Services. She went on to say that her youngest son, who is eight weeks old, screamed and cried as the police wouldn’t let her feed her baby.

She then spent the next five days in a cell at Hamilton County Justice Center, then was transferred to Brown County for the next two days.

During her incarceration she was interviewed by Aberdeen Police Chief David Benjamin, who soon realized they had the wrong Ashley Foster in custody.

All charges were then dropped and she was released. However, Foster said she’s not received a single apology from the chief, saying he just said “thank you for your time.”

Foster is going to be meeting with an attorney and warned everyone that a similar situation could happen to them.

This is absolutely terrifying, and given this digital era we live in, Foster’s correct. This sort of thing could happen to anyone.

What’s disappointing is the lack of remorse on the side of the police who were the ones ultimately responsible for this debacle. A public apology should be made immediately and further steps should be taken to verify the correct identity of someone with a warrant out for their arrest.

Police are no doubt heroes for putting their lives on the line each and every day to keep our communities safe, however, they’re not immune to making mistakes. We should understand that and not throw law enforcement as a whole under the buss because of errors that are made.

Rather, we should take things like this on a case-by-case basis and hold those guilty of such mistakes accountable for what happened.

The COVID Injection “Works” So Well, Fauci Says You Still Need To Muzzle Your Mug Up Indoors After 2 Shots (Video)
July 23rd, 2021 Sons of Liberty Media