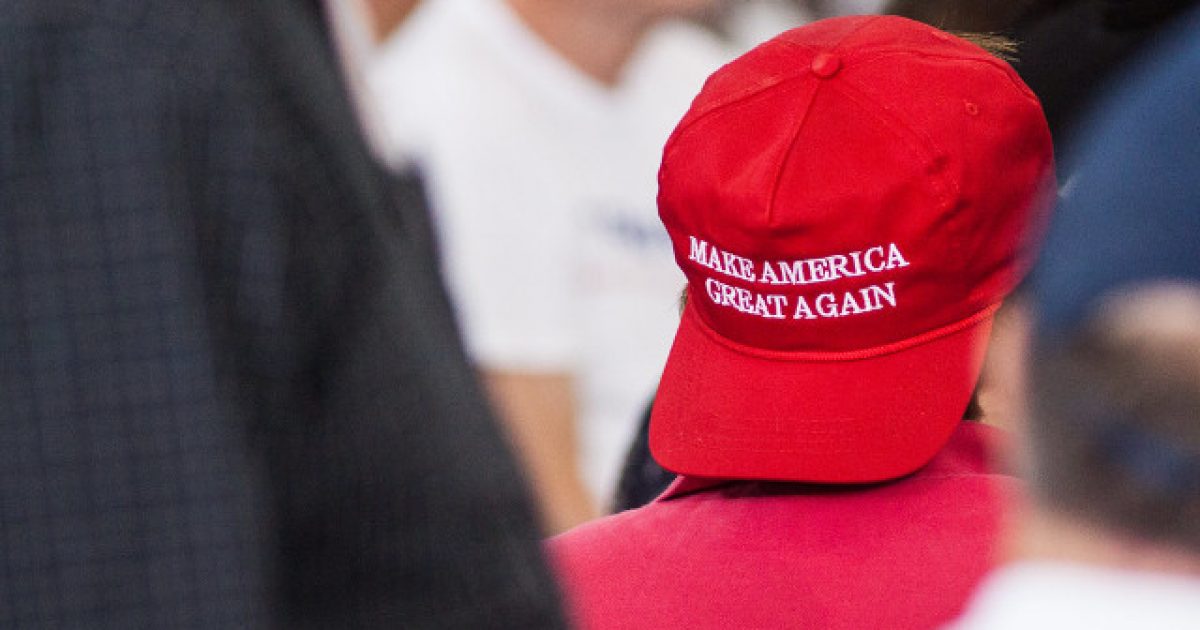 A sportswriter bragged on Sunday on Twitter that she “just yelled at a prick with the audacity to wear a f***ing Make America Great Again hat in the middle of a jazz festival,” but probably wasn’t anticipating the amount of ridicule she’d receive for her actions.

By the way, if you get on Twitter to gush about how cool you are for yelling at someone for being bold enough to wear a hat that supports a candidate you disagree with, it becomes clear relatively quickly that you are desperate for attention and affirmation, thus making you an object ripe for mockery and scorn.

Natalie Weiner, a writer for SBNation, appears to have been attending the New Orleans Jazz & Heritage Festival at the time of her tweet. She added in the thread that the MAGA hat-wearer “doesn’t deserve to be within a 10 mile radius” of singer Irma Thomas, who was performing at the festival.

“I don’t understand how people can be so hateful,” Weiner also noted. 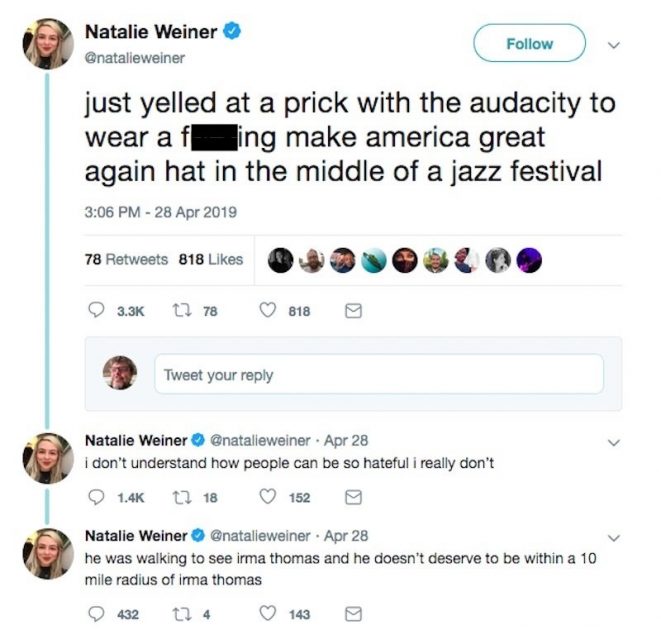 So what did everyone else think of Weiner’s tweet? Well, there were over 800 likes and 3,500 comments. This means the tweet was “ratioed,” which means it had far more comments than likes and is usually a negative phenomenon.

A cursory glance at those comments indicates that not everybody was down with the journalist’s announcement that she yelled at a MAGA hat wearer and called him a “prick”:

“There’s definitely a problem here. It isn’t with the guy wearing a hat.”

“Imagine screaming at a stranger in public because of a hat and thinking THEY’RE the hateful one. You’re not cool, brave, dignified, or justified in doing this. You’re just a c***.”

“‘Sports journalists’ are the new vanguard of the SJW asshattery.”

“So you were the concert police, who can’t seem to have control over yourself when seeing an article of clothing? Now I know why people like you are for control over everything. Newsflash, not everyone is like you. Thank the Lord for that.”

“What a truly putrid series of tweets. You deserve the ratio, you intolerant dullard.”

“I hope you explained to him that jazz concerts are safe spaces, free from the pesky First Amendment.”

“Tolerance at its finest I see.”

“The self-righteousness is nauseating.”

“Nice to see you liberal fascists at work. You make POTUS Trumps re-election more certain by the hour.”

Yeah that’s definitely not the response she was fishing for. She was hoping to earn some extra hip “woke” points for being brave and bold for the cause, maybe earn some more followers.

Doesn’t look like that went the way she was hoping for. Guess if she wants to be considered a “major influencer” and help build her “brand” and thus further her career, she should try doing something other than weak hashtag activism and yelling at people for wearing hats.